Ludolf Bakhuizen painted seascapes, often with storms, identifiable ships and events at sea, also both seascapes and landscapes with Biblical scenes, and portraits [1]. Bakhuizen was trained as a clerk in Emden in East Frisia (now Germany) before moving to Amsterdam c. 1650. There he worked as a calligrapher and draughtsman, but according to his near contemporary and first biographer Arnold Houbraken (1660–1719) he also learned oil painting from the landscape painters Hendrick Jacobsz. Dubbels (1621–1707) and Allaert van Everdingen (1621–75). His early drawings on canvas, panel or parchment are mainly of marine scenes and are inspired by the pen drawings of the 1650s by Willem van de Velde I (c. 1611–93). Bakhuizen continued to produce them until the 1660s.

Bakhuizen became famous as a marine painter in the 1660s. The simple compositions and silvery tonalities of his earliest known paintings reflect the work of Dubbels and Van Everdingen, the artists Houbraken mentioned as his teachers. Despite producing numerous marine paintings and individual portraits and providing marine backgrounds for portraits by Bartholomeus van der Helst (1613–70), Bakhuizen nevertheless continued to refer to himself as a draughtsman throughout the 1650s, and he did not join the Amsterdam painters’ guild until 1663.

It was in the 1660s that Bakhuizen’s fame as a marine painter became established. In 1665 he received a prestigious commission from the burgomasters of Amsterdam to paint a View of Amsterdam and the IJ (now in the Louvre) [2], as a gift for Hugues de Lionne (1611–1671), Foreign Minister of Louis XIV (1638–1715).2 The departure of both Willem van de Veldes for England in 1672 left Bakhuizen as the leading marine painter in the Netherlands.3 Unlike theirs, Bakhuizen’s seascapes show his interest in the weather, especially in storms, and in figures, and less concern for rendering technical details of ships. According to Houbraken he was visited by princes including Frederick I of Prussia (1657–1713), Cosimo III de’ Medici (1642–1723) and Peter the Great of Russia (1672–1725). The tsar is said to have taken drawing lessons from him.

In 1699 Bakhuizen co-founded a kunstkamer (art room) in Amsterdam Town Hall, of which he became one of the first directors. This room displayed not only contemporary paintings for sale but also such things as terracotta models by Artus Quellinus I (1609–68) for the sculptural decoration of the Town Hall, to serve as models for artists. The room was also used as a kind of drawing academy. Bakhuizen did not make his first etchings until 1701, for the series D’Y Stroom en Zeegezichten (Views of the River IJ and the Sea), which glorifies Amsterdam – as did many of his works.4 His career stretched over half a century, and his last known work is dated 1707.

Joseph Mallord William Turner (1775–1851) seems to have been inspired by Bakhuizen’s ‘pre-romantic’ paintings, of which some were present and appreciated in Great Britain at the beginning of the 19th century: John Smith in the sixth volume of his œuvre catalogues of Dutch and Flemish painters (1835) discusses 155 of Bakhuizen’s works. 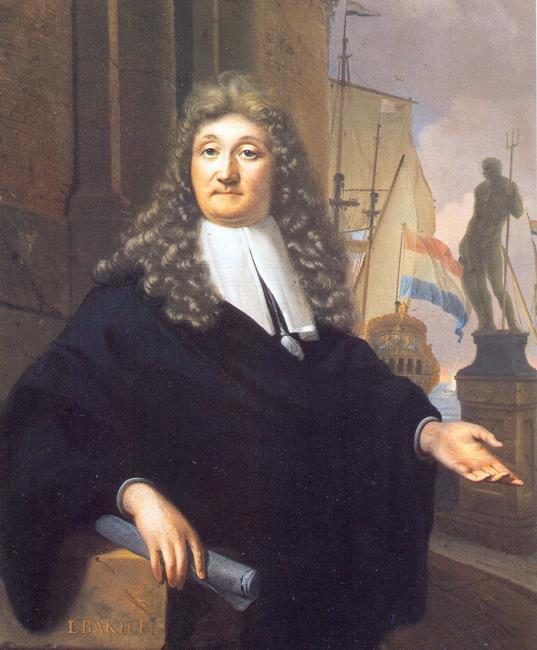 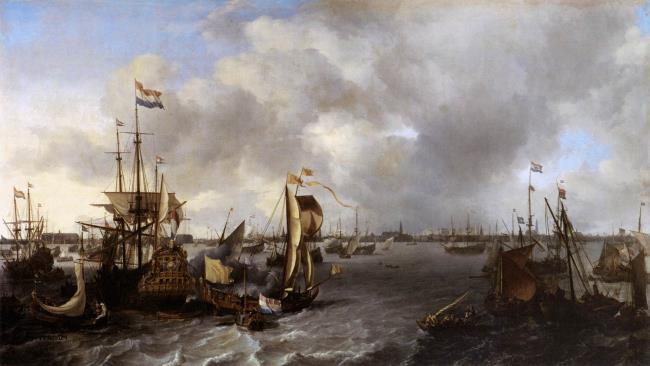 DPG327 – Boats in an Upcoming Storm with the Church of Zandvoort

The picture displays Bakhuizen’s characteristic features, which emerged after 1665. While he maintains his usual formula of placing his subject in a sliver of brilliant sunshine surrounded by a dark sea, his compositions after that date are more daring, his lighting more dramatic. The scene shows a sailing craft, a wijdschip (wide ship), packed with passengers.17 The wind has blown it in the direction of a krib (groin), a low wall or sturdy timber barrier built out into the sea from a beach to check erosion and drifting. Three small kaags (ketches or boats designed to carry cargo on inland waterways) approach the coast as well.18 On the shore men pull on a rope to drag the ship’s stern about. The church in the background on the right has a long nave with a tall choir and a tall, slender tower, features most like those of the Reformed church in Zandvoort on the west coast of the Dutch provinces (Related works, nos 4a, 4b; [3].19 It has not been possible to identify the other church in the far distance on the left of the picture, or to ascertain whether DPG327 depicts an existing landscape or, more likely, a scene composed of different elements, not necessarily on one location.20 The lively figures are, as always, by the master himself. One year earlier, in 1695, Bakhuizen had painted a Christ in the Storm on the Sea of Galilee, now in Indianapolis (Related works, no. 1) [4]. It shows that with very small changes a sea piece can become a history painting. It also shows by contrast that the ships in DPG327 are not in any real danger, contrary to what has been said several times.

Turner’s Calais Pier, exhibited at the Royal Academy in 1803 (Related works, no. 3) [5], seems to be inspired in atmosphere, style and content by DPG327, or a similar painting by Bakhuizen. The fact that Ruskin, always defending Turner, chose DPG327 to formulate his criticism of Dutch painters in the first edition of his Modern Painters (1843) might indicate that he also saw the relationship between Bakhuizen and Turner.21 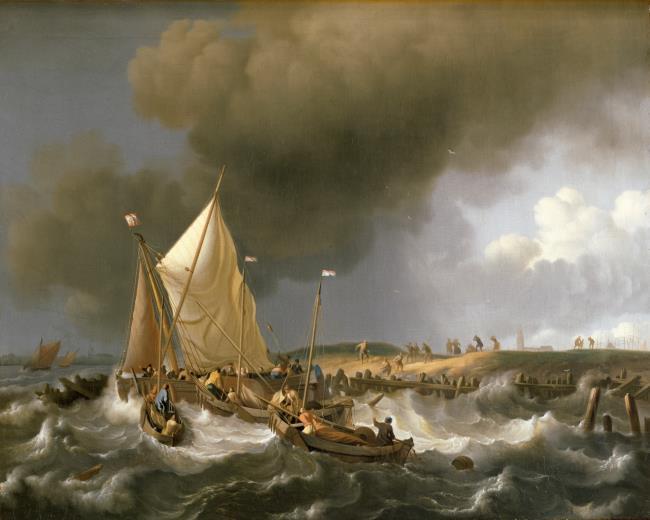 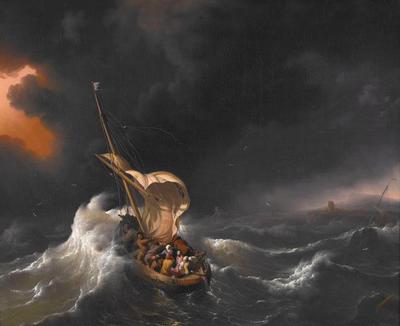 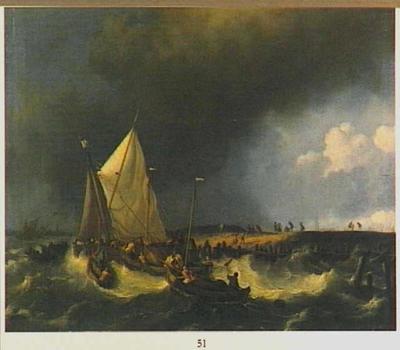 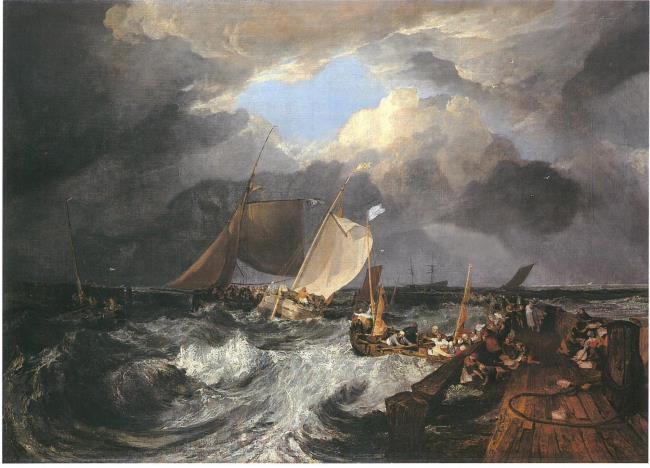 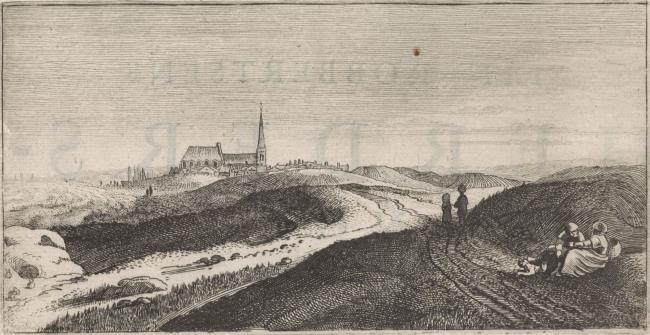 2 The picture was meant to complement an existing collection of depictions of the main European cities; Bakhuizen received 1,275 guilders for it in 1666 (with a gold ducat for his wife): Van der Veen 2019a, p. 910.

5 In the sales of Desenfans’ collection in London there seem to have been at least two pictures by Bakhuizen. One called A brisk gale appears several times (I, II, III), as does another called A sea piece (IV, V, VI); either – or perhaps both, if the titles in fact refer to the same picture – might be DPG327. The Sea View (VIII) could also be DPG327. A Storm, with a Shipwreck (VII) is definitely not, as there is no shipwreck visible in the Dulwich picture; and similarly the absence of ‘a Dutch man of war’ rules out A brisk gale or A sea view (IX).

7 ‘Ludolf H. Backhuysen. A Sea Piece. A clever specimen of the master, and not so leaden in its colouring as most of his works.’

8 ‘In the Second Room, No. 90, a Sea Storm, by Backhuysen, and No. 93, A Calm, by W. Vandervelde, are equally excellent, the one for its gloomy turbulence, and the other for its glassy smoothness.’

9 ‘In the Second Room, No. 75, a Sea Storm, by Backhuysen, and No. 92, A Calm, by W. Vandervelde, are equally excellent, the one for its gloomy turbulence, and the other for its glassy smoothness.’

10 §19. ‘Compared with the clouds of Backhuysen. It is instructive to compare with this such a sky as that of Backhuysen, No. 75, Dulwich Gallery [DPG327], where we have perfectly spherical clusters of grape-like, smooth, opaque bodies, which are evidently the results of the artist’s imaginative powers, strained to their highest pitch in his study, perhaps, however, modified and rendered more classical and ideal by his feeling of the beautiful in the human form, at least in that part of it which is in Dutchmen most peculiarly developed. There are few pictures which are so evidently in-door work as this, so completely in every part bearing witness to the habit of the artist of shutting his eyes and soul to every impression from without, and repeating for ever and ever without a sensation of imperfection, a hope or desire of improvement, or a single thought of truth or nature, the same childish, contemptible, and impossible conception. It is a valuable piece of work, as teaching us the abasement into which the human mind may fall when it trusts to its own strength, and delights in its own imagination.’ According to Cook & Wedderburn (1903, iii, p. 385 (note)) this passage appeared in the 1843 version but not in the subsequent editions.

19 The medieval church of Zandvoort, originally dedicated to SS. Agatha and Adrian, was remodelled for Reformed worship in 1618, and demolished in 1848: Van der Mije 1957, p. 5. See also above, note 15. However Laurens Schoemaker wrote: ‘The church is difficult to identify and could also be the church of Scheveningen’; email to Ellinoor Bergvelt, 6 Nov. 2015 (DPG327 file). Indeed that church also has a tall choir: see for instance RKDimages 237396 or RKDimages 426576 (both Sept. 24, 2020). What can be found in RKD images under the 'church of Scheveningen' or the 'church of Zandvoort' in the 17th century, however, shows such different spires that it seems almost impossible to determine which church Bakhuizen may have had in mind. That is why I prefer to keep to the original identification as Zandvoort made by the late Michiel Jonker.

20 Remmelt Daalder wrote of the setting: ‘I do not believe that it is Zandvoort: there you have a sandy beach, no timbering along the coast. Seems to me rather to be the Zuiderzee, perhaps the church of Enkhuizen in the distance? I also see a beurtschip (narrowship), I think and a number of fishing boats, one of which has a braided basket, a kind of net. In it you keep the fish caught alive.’ Email to Ellinoor Bergvelt, 28 March 2018 (DPG327 file), for which many thanks. Daalder clearly assumes that DPG327 is a depiction of an existing landscape, but Dutch 17th-century artists are known to have made landscape compositions where they inserted buildings as set pieces.