DPG88 – A Farrier shoeing an Ass near Ruins

TECHNICAL NOTES
Medium weight plain-weave linen canvas. The ground layer consists of a warm mixed brown preparation. The paint surface has a fine, very slightly granular texture. No original tacking edges remain. The painting has been glue paste lined. The stretcher is 0.5 cm wider than the original picture on all sides except for the left where there is a 1.2 cm in-painted addition. There is some weave interference and flattened impasto from an earlier lining. Some discolouration has occurred in the hill areas; this is possibly related to the use of smalt in the underlayers. The brown passages of paint have suffered from past cleaning abrasion. Overall, the paint layers are in very good condition. Previous recorded treatment: 1936, stretcher and frame treated for woodworm; 1948–53, cleaned and perhaps lined, Dr Hell; 1995, relined onto new stretcher, cleaned and restored, N. Ryder.

This is a typical Berchem Italianate scene, datable to c. 1650–60. The composition is enlivened by patches of light, which give accents to the figures. The architecture of the ruins blocks the view of the wider landcape.

The painting was regarded by Jameson in 1842 and Denning in 1858 and 1859 as one of the best by Berchem in the Gallery.21 However, as appreciation for the Dutch Italianates lessened, DPG88 was singled out for criticism. In 1824 Hazlitt wrote, ‘There is a truth of character and delicate finishing; but the fault of all Berchem’s pictures is that he continues to finish after he has done looking at nature, and his last touches are different from hers. Hence comes that resemblance to tea-board painting, which even his best works are chargeable with’.22

In 1843 Ruskin considered the quality of ‘strangeness’, an unusual technique or effect, for which he compared the bull’s head in Rubens’ Adoration of the Magi (Antwerp) with the cow in DPG88, and found Berchem wanting: ‘a dark back-ground is first laid in with exquisite delicacy and transparency, and on this the cow’s head is actually modelled in luminous white, the separate locks of hair projecting from the canvas. No surprise, nor much pleasure of any kind, would be attendant on this execution, even were the result equally successful; and what little pleasure we have in it vanishes, when on retiring from the picture we find the head shining like a distant lantern, instead of seeming substantial or near.’23 Ian Dejardin wondered whether the browns and greens had darkened chemically over time, so that the contrasts are over-emphasized. 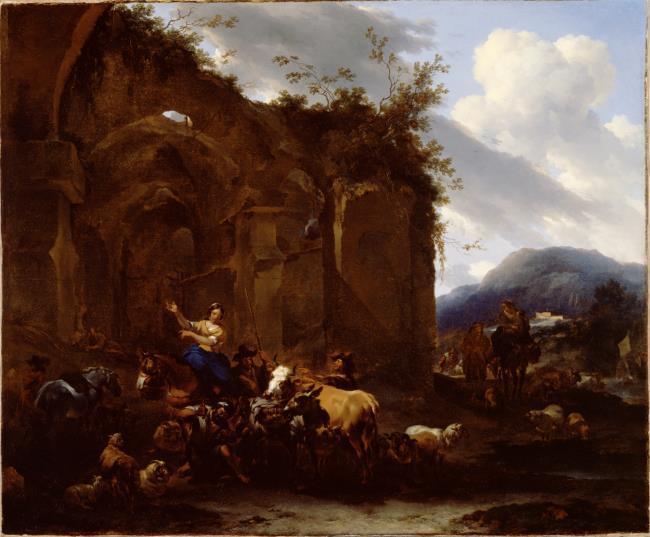 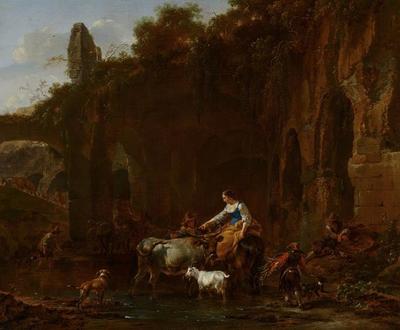 DPG337 – Ruins, with Cattle and Figures

TECHNICAL NOTES
Single-member oak panel. The paint surface is worn, particularly in areas of the sky and mountain, and the signature has been almost entirely abraded. The entire image has darkened in tonality. Previous recorded treatment: 1936, worm holes in panel filled; 1952–68, ?cleaned, Dr Hell.

An Italianate landscape, where the architecture obstructs the wider view. Early catalogues of the Dulwich collection record that the picture was signed ‘Berchem’, but this is no longer visible. The landscape in the background is almost totally lost, as is the herdsman behind the cow. The poor condition of the painting makes a fair appraisal impossible, but the two women in the foreground show enough quality to reinstate DPG337 as a work of Berchem’s middle period. The picture does not appear to have been in good condition even in the 19th century: Mrs Jameson described it as ‘Very dark and dingy’ – so indistinct that she thought there was another woman milking the cow. In the 1859 version of Denning’s catalogue it became ‘ascribed to Nicholas Berchem’, and in 1880 Richter and Sparkes judged that it was an imitation of Berchem.

Hofstede de Groot considered this to be an early work, and, following Smith, proposed that it had a pair when it was in the collection of Willem Lormier (1682–1758) between 1752 (nos 42 and 43) and 1763 (nos 43 and 44). However, according to Hofstede de Groot himself the two pictures had a different provenance before they were purchased by Lormier, and also in the Lormier sales they are not indicated as a pair.32 The supposed pair is untraced.33 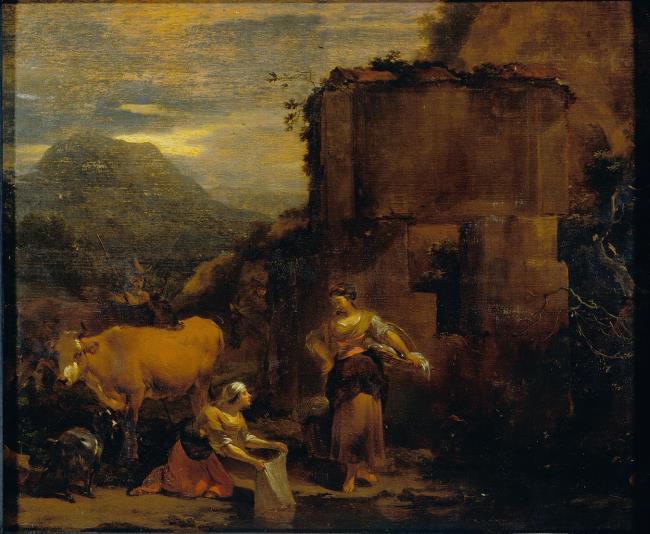 1 DPG88 may have been in the Desenfans sale, London, 16 June 1794 (Lugt 5226), lot 99 (‘Landscape, cattle and figures, with a farrier shoeing an ass, companion to 97 – 3 ft. 9 by 3 ft. 3, on canvas’). However it is not upright in format. The ‘companion’ was described as ‘Landscape, cattle, and figures’ with the same dimensions. The picture did not sell, or was withdrawn, and it is difficult to determine whether it was in one of the later sales of Desenfans’ collection. There were numerous pictures by Berchem of farriers at work.

2 As Hofstede de Groot suggested in his RKD index cards.

3 ‘Berghem. Landscape, with animals and figures; a man shoeing an ass.’

4 ‘Among the Berchems, if I recollect rightly, 164 is the best and most characteristic example.’ However in Cat. 1820 no. 164 is a Rubens (Historical Sketch) and in Cat. 1830 no. 164 is a painting by [Pietro da] Cortona. It is probable that Patmore refers to DPG88, as it is the largest and at the time considered to be the most typical Berchem in the collection.

5 See below in the main text where Hazlitt 1824 is discussed.

7 ‘in his usual manner’; see the main text, last paragraph.

8 ‘§7 Strangeness an illegitimate source of pleasure in execution: […] By Berghem, on the other hand, a dark back-ground is first laid in with exquisite delicacy and transparency, and on this the cow’s head is actually modelled in luminous white, the separate locks of hair projecting from the canvas. No surprise, nor much pleasure of any kind, would be attendant on this execution, even were the result equally successful; and what little pleasure we had in it, vanishes, when on retiring from the picture, we find the head shining like a distant lantern, instead of seeming substantial or near. Yet strangeness is not to be considered as a legitimate source of pleasure. […] This kind of pleasure is illegitimate, therefore, because it implies and requires, in those who feel it, ignorance of art.’

9 ‘§13 General falsehood of the old masters in this respect: […] Take the Berghem, No. 132, Dulwich Gallery, which is a most studied piece of chiaroscuro. Here we have the light isolated with a vengeance! Looking at it from the opposite side of the room, we fancy it must be the representation of some experiment with the oxy-hydrogen microscope; and it is with no small astonishment that we find, on closer approach, that all the radiance proceeds from a cow’s head. Mithra may well be inimical to Taurus, if his occupation is to be taken out of his hands in this way! If cattle heads are to be thus phosphorescent, we shall be able to do without the sun altogether! But even supposing that this were a true representation of a point of light, where are our points of darkness? The whole picture, wall, figures, and ground, is one mass of deep shade, through which the details are, indeed, marvellously given when we look close, but which totally precludes all possibility of giving a single point or keynote of shade. Now, nature, just as far as she raised the white cow’s head above all the middle tint in light, would have put some black cow’s head, or hole in the wall, or dark piece of dress, something, it matters not what – below all the middle tint in darkness – just as violent and just as conspicuous in shade, as the head is violent and conspicuous in light. Consequently, Berghem has given us only two members of the system of chiaroscuro, of which nature has appointed that there shall always be three. I have chosen this picture for illustration, because it is a very clever and careful work by a master, not, in his ordinary works, viciously disposed to tricks of chiaroscuro.’ According to Cook & Wedderburn (1903, iii, pp. 316–17 (note): the passage above is only included in the first and second editions, between §12 and §13.

11 ‘A good specimen of the skilfulness with which Berchem, while in Holland, during his second and later period, reproduced Roman ruins and figures, after an adopted model.’

28 ‘Companion. A landscape, exhibiting a diversified scene, animated with cattle and figures. Among the latter may be noticed a woman washing linen. Collection of M. Lormier. Hague, 1763. 1110 flo. 100 l.’ Smith started the confusion about the companion: he says that the picture that might be DPG337 has as companion his no. 19 (on pp. 12–13), The Passage Boat, or Le Passage du Bac, which was engraved by Laurent in 1773 (see note 31 below). However that picture is described in Lormier’s 1763 catalogue as ‘Een Landschap, Koey, Schaapen, en een Vrouw te Paardt, en een die een Gyt melkt’ (A Landscape, Cow, Sheep, and a Woman riding a Horse, and one milking a Goat). No water or boat is mentioned.

29 ‘A Landscape, with Figures. A woman milking a red cow; another washing linen at a stream, &c. Very dark and dingy.’ The painting must have been very dark indeed, as no one is milking the red cow.

30 ‘Painted in imitation of Berchem; the colour of a heavy brown tone, and dull in effect; the signature a forgery.’

32 Moreover the description of Smith 19 does not correspond to the descriptions in the Lormier sales (see note 28 above). According to HdG himself DPG337 (his no. 288) was in the Van Sonne sale in 1752, while HdG’s no. 220 in 1739 was in the Hendrik Schut sale. In both cases no pair is mentioned. See also the preceding note. In the Lormier sales the picture that is supposed to be DPG337 is preceded by a picture on panel that has the same dimensions. However the two pictures are not referred to as a pair.