Nicolaes Berchem [1] belonged to the second generation of the Italianates. He was one of the most famous and financially successful Dutch artists of the 17th century. He spelled his surname in various ways, which sometimes helps in the dating of his pictures.

Also in the 1650s Berchem began to produce panoramic views painted in bright colours. These reflect the influence of Italianate painters such as Jan Asselijn (c. 1610/15–52) and Jan Both (c. 1615/22–52), and, most significantly, begin to display an idealized Italianate style. They are characterized by warm light, wandering shepherds, towering trees, and occasionally include identifiable landmarks such as the Temple of the Sibyl near Tivoli in Italy, as well as the ruins of the castles of Brederode and Croonenburgh in the Netherlands. He also painted several Mediterranean harbour scenes that contain exotically dressed figures, and Classical sculpture and architecture. Claims that Berchem visited Italy on one or more occasions are not supported by documentary evidence.2

In the 1650s and 1660s Berchem moved back and forth between Haarlem and Amsterdam, where he worked for the cartographer Nicolaes Visscher II (1618–79 or 1709), before finally settling in Amsterdam in 1677. During these years his style became looser and his landscapes increasingly dramatic. At the very end of his life he concentrated on allegorical scenes and history paintings. At least one painting was brought to the British Isles: in 1658 Sir Peter Lely (1618–80) purchased an Italianate landscape from Berchem for £32 on behalf of Sir Ralph Bankes. It was hung in Gray’s Inn in London and later moved to the recently built Kingston Lacy in Dorset, where it remains today.3

Berchem painted the figures in works by Jacob van Ruisdael, Meindert Hobbema (1638–1709), Willem Schellinks (1623–78), Allaert van Everdingen (1621–75) and Jan Hackaert (1628–85/90). He also collaborated with Gerard Dou (1613–75), Jan Wils and Jan Baptist Weenix (1621–59). He was a very prolific draughtsman and printmaker, making studies for his own work and also creating finished, signed drawings for contemporary collectors.4 His popularity during his life, and his own activity in painting, drawing and printmaking, are responsible for a great amount of copies after his work by himself, but primarily by others.5

Berchem died in 1683; in that same year his wife sold the paintings (for 12,000 guilders), books, and graphic works from his estate in two auctions. These reveal that in addition to numerous works by himself and others he owned over 1,300 prints by the Italian engraver Antonio Tempesta (1555–1630).

Berchem’s influence was considerable, not only in the Netherlands. In France it affected 18th-century painters including François Boucher (1703–70), Jean-Honoré Fragonard (1732–1806) and Jean Baptiste Oudry (1686–1755);6 that his paintings were highly valued there appears from the high prices achieved at the sales of the collections of the comtesse de Verrue (1737) and Jean de Jullienne (1767).7 Works by him also feature in inventories of the Roman Colonna family collection (1756 and 1783), and the Roman collector Nicola Pio (c. 1677–after 1733) wrote his biography in 1724.8

According to Hazlitt in 1816 one of the old masters that Bourgeois copied was Berchem.9 The taste for Italianate landscapes apparent in the Desenfans/Bourgeois collection at Dulwich eventually declined. One of the first to condemn the Dutch Italianates in general and Berchem in particular was John Constable (1776–1837). After a lecture in 1836 in which Constable criticized the Italianates for their artificiality, a collector in the audience apparently said: ‘I suppose I had better sell my Berchems’, to which Constable replied: ‘No sir, that would only continue the mischief. Burn them!’10 Berchem has recently regained at least some of the popularity he enjoyed in the 17th and 18th centuries. 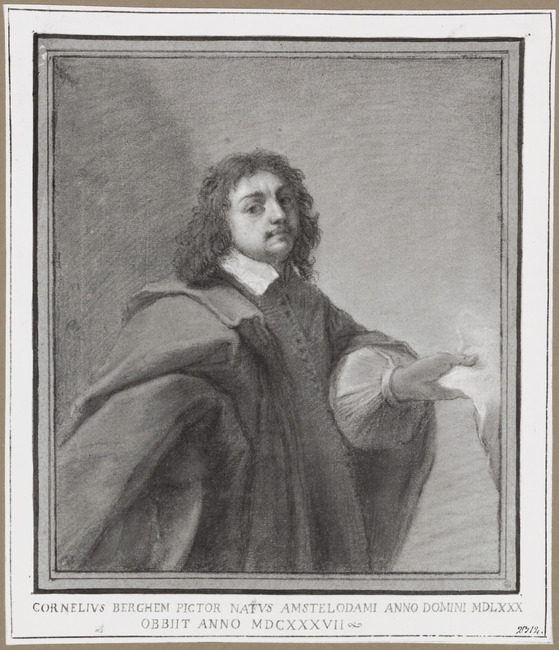 2 Jansen 1985b wrote that there is a painting on Italian linen that Berchem might have made in Italy. That was contradicted in Pijl 2006, p. 88, and Jansen agreed in his review of the catalogue of the Berchem exhibition: Jansen 2007b, p. 355.

8 For the Colonna collection, see Safarik & Pujia 1996. Nicola Pio was an important print collector. His biography of Berghem – Pio 1724/1977 is not altogether accurate: for instance he calls the artist Cornelio Berghem, perhaps confusing the names of the printmaker and the publisher, Cornelis Visscher.

9 Hazlitt 1816/1930–34, iii, p. 189: ‘At one time he [Bourgeois] copied the old masters. One of these copies after Berghem [Berchem], but in the style of Wouvermans, is a good imitation, pencilled with great labour and exactness, but not with the freedom of an original. […] The subject, a man on a white Galloway, bird-catching; but the copy was not finished, nor the nets inserted.’