His early training is unknown. It is commonly thought that Anthonie van Borssom might have been a pupil of Rembrandt (he is included in Sumowski’s overview of Rembrandt’s pupils). Indeed some of his drawings show Rembrandt’s influence, but no documents have been found that support that idea. Van Borssom was a prolific draughtsman, but it seems he was not a particularly productive painter. He travelled in the Rhineland near Cleves, where he made studies between 1651 and 1656. His landscapes show several influences, and are mainly in the manner of Philips Koninck (1619–88), Paulus Potter (1625–54), Jacob van Ruisdael (1628/9–82), Aert van der Neer (1603–77), and Jan Wijnants (1632–84). It has been difficult to establish a chronology of his works, as only five autograph works are dated, between 1655 and 1671, and these reveal little stylistic development.

TECHNICAL NOTES
Medium plain-weave linen canvas. The reddish-brown ground is clearly visible through abraded areas of the pale sky. Lined onto linen; no original tacking edges remain. There is an old crease along the bottom edge. The painting is very worn and has been heavily damaged by over-cleaning at some point in the past, which has removed most of the landscape centre-right and revealed two more cows. These are severely abraded and are thought to have been repainted at some point in the past (possibly by Bourgeois); the red cow is particularly damaged and may still bear some overpaint. On the left there is a pentimento of a large seated figure. A figure in the landscape on the right, to the right of the dog, has also been painted out. The partially removed varnish is very discoloured and distracting – there are remnants along the bottom, particularly in the corners, which are uneven and have noticeable drip marks. Previous recorded treatment: 1911, relined, Holder; 1949–55, partially cleaned, overpaint partially removed, Dr Hell.

This picture was long attributed to Paulus Potter, probably only because of the subject. Already in 1842 Mrs Jameson noted that although it was well painted, it was not by Potter.10 Denning in his 1858 and 1859 catalogues also had doubts about the attribution, but he too liked the painting.11 Ruskin, on the other hand, believed in the Potter attribution but criticized the picture for not being naturalistic enough, noting that ‘while this water receives clear reflections from the fence and hedge on the left, and is everywhere smooth and evidently capable of giving true images, it yet reflects none of the cows.’12

The painting was first attributed to ‘Abraham van Borssom’ by Richter and Sparkes in 1880; in 1906 Wurzbach named Anthony van Borssom as the maker; but the DPG catalogues then returned to ‘Abraham van Borssom’ or only ‘Van Borssom’. Sumowski in 1983 rightly called the artist ‘Anthonie’, and noted a signed variant in Bamberg (Related works, no. 1). A second related, and also signed, picture was recently on the London art market (Related works, no. 2) [1]. These pictures vary only in the position of some of the cows, and minor details; the landscape setting is nearly identical. Cleaning presumably carried out between 1949 and 1955 revealed two cows in the centre of the picture which were severely abraded and which had been overpainted with a continuation of the landscape.

Landscape with Cattle may have been in Desenfans’ possession in 1804, when a picture by Potter is mentioned in an account of a visit to Desenfans’ house by the Rev. Bray, who wrote, ‘In the drawing room is a chef d’œuvre of Cuyp; but in another [room] a cattle piece by Potter, superior to anything of the former.’13 In Britton’s inventory made in 1813 there was no Cuyp in the Drawing Room; there was one in the Small Drawing Room, but the most important Cuyps were hanging in the Library. So some rehang must have been carried out between 1804 and 1813. 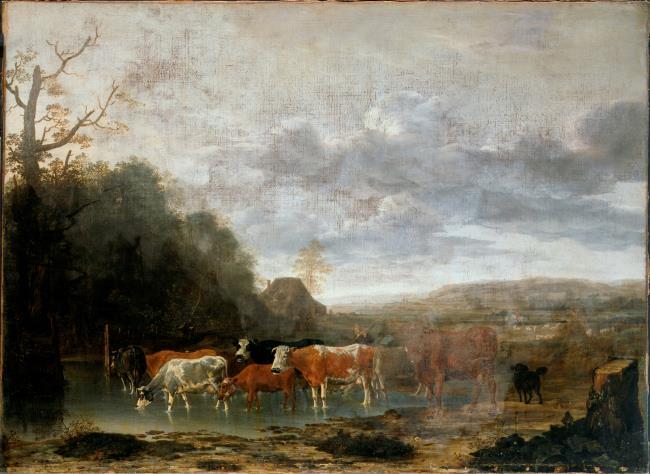 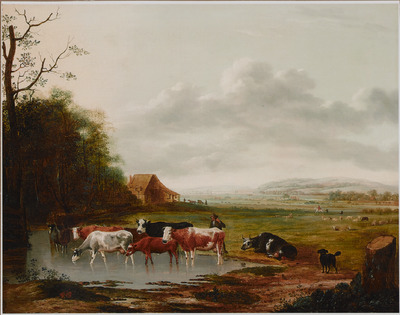 2 ‘Paul Potter. Cattle drinking at a pond in the fore-ground; a distant flat country with hills in the distance, and a farm-house in the middle distance. The water is lucid, clear, and transparent; the cattle particularly fine.’

4 ‘–? Attributed here to Paul Potter, but certainly not by him. It is very well painted.’

5 ‘§20. And of Paul Potter, in casting no reflections from half-a-dozen objects. Again, in the picture attributed to Paul Potter, No. 176. Dulwich Gallery [DPG133], I believe most people must feel, the moment they look at it, that there is something wrong with the water, that it looks odd, and hard, and like ice or lead; and though they may not be able to tell the reason of the impression, for when they go near they will find it smooth and lustrous, and prettily painted, yet they will not be able to shake off the unpleasant sense of its being like a plate of bad mirror set in a model landscape among moss, rather than like a pond. The reason is, that while this water receives clear reflections from the fence and hedge on the left, and is every where smooth and evidently capable of giving true images, it yet reflects none of the cows.’

6 ‘A good picture, but parts of it are not fine enough for Paul Potter. It might be by Camphuysen.’

7 According to Sumowski (1983–94, i, 1983, p. 429) the Dulwich painting is Eine schlecht erhaltene, nicht reproduktionsfähige Variante der Komposition [of the Bamberg picture, Related works, no. 1], zum Teil mit identische Tieren (A badly preserved, not reproducible version of the composition [of Related works, no. 1], in part with identical animals).