His name appears both as Dirck van Bergen and Dirck van den Bergen. He was a pupil in Amsterdam of Adriaen van de Velde (1636–72), whose influence is visible in most of his work. His earliest dated painting is of 1676 and the latest of 1690. He painted idyllic sunny landscapes in golden tones, with cows, shepherds and shepherdesses, mostly in a small format. He visited England briefly, during which period he painted overdoors and overmantels for Ham House (c. 1673). After that he returned to Haarlem, where his work sold well.

TECHNICAL NOTES
Coarse tabby-weave linen canvas mounted on an oak panel with a 0.7 cm batten along the bottom. There is a very slight left-to-right warp and the panel grain is pronounced, probably as a result of overheating. The weave of the canvas has also been emphasized by the mounting treatment. The reverse of the panel is painted, which is likely to have prevented the panel from warping more. The paint film itself is in fair condition, displaying drying cracks and a little thinness and minor wear in the darker glazes of the landscape. UV examination has revealed that the work was previously partially cleaned in the sky, figures, cows, centre and right; the river on the left, the lower portion of the composition, and the trees were left uncleaned. Some old darkened retouchings are visible as dark spots in the sky. Previous recorded treatment: 1953–5, conserved, Dr Hell.

This was regarded as a work by Adriaen van de Velde until the Richter and Sparkes catalogue of 1880, and then as a work after him, but an original was never found. It is, rather, a typical landscape by Dirck van Bergen, whose work is very often confused with that of Adriaen van de Velde and Nicolaes Berchem (1621/2–1683).9 Characteristic elements are the rather clumsy figures, which are not in scale with the cattle. There are paintings by the same hand in Cherbourg (Related works, no. 1), Düsseldorf (no. 2), Berlin (no. 3), Vienna (no. 4) [1], and in a private collection in Mainz (no. 5). The last depicts an Arcadian landscape with a fountain, as in DPG166 by Nicolaes Berchem. 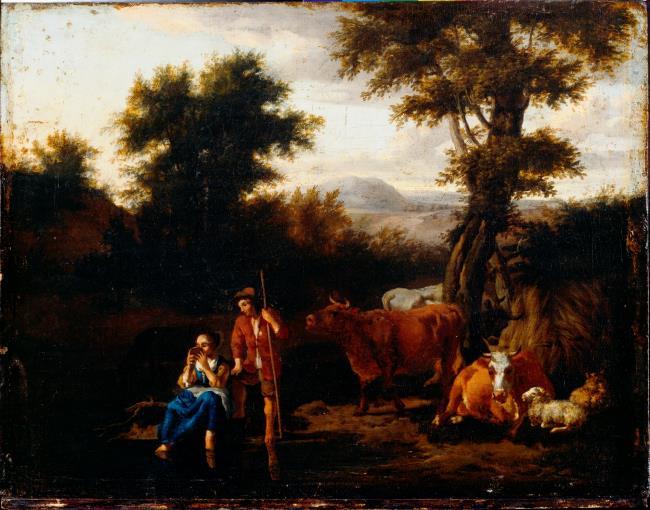 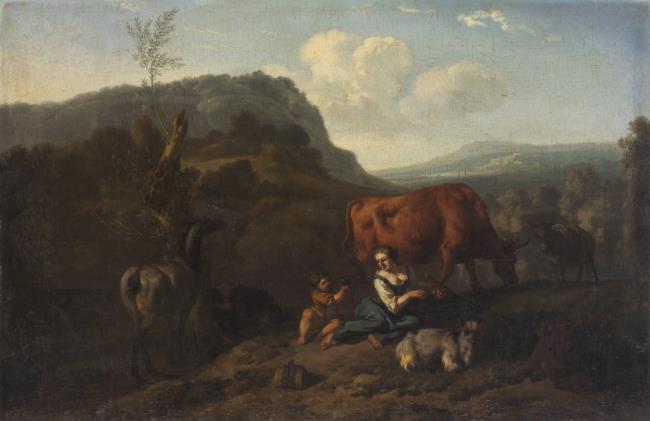 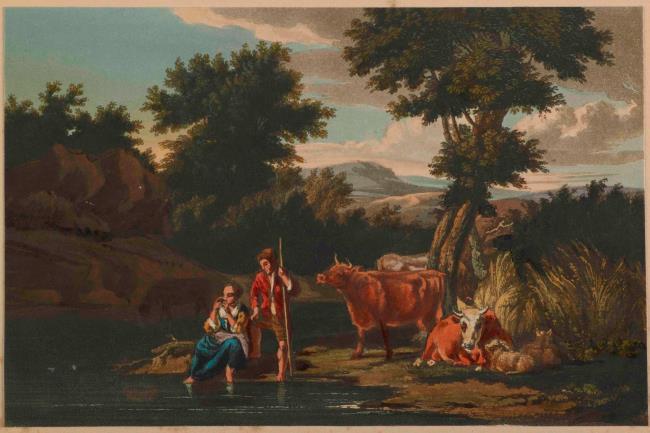 1 ‘By the same [= Adrian Vandervelde]; no. 164, A Landscape with Cattle and Figures. The foreground of this picture is occupied by a sheet of water; on its banks are a young shepherd and shepherdess – she is dressed in blue and yellow, and is sitting on a trunk of a tree, her feet in the water, while she drinks out of a goblet she holds with both her hands; the young man is standing near her, dressed in red; a light brown cow is drawing towards them, apparently lowing. At a little distance, another cow, and some sheep are reclining on a mossy bank, while the scene is greatly heightened by a grey cow, in the natural action of rubbing herself against one of the trees, in the more retired part of the picture. On canvas.’ Also in GPID (20 Sept. 2012). Desenfans also mentions a companion, but that had returned to its previous owner. NB: GPID (May 31, 2017) shows three Dirck van (den) Bergen paintings before 1811, two in Hamburg (Germany) and one in Brussels; their descriptions do not match DPG17.

9 Christopher Brown suggested ‘?Willem Romeyn’ (note in DPG177 file), but we consider that Van (den) Bergen is the correct attribution.