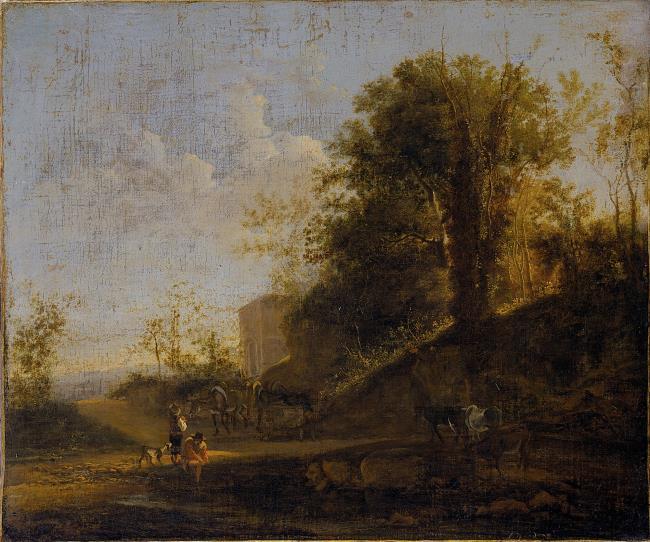 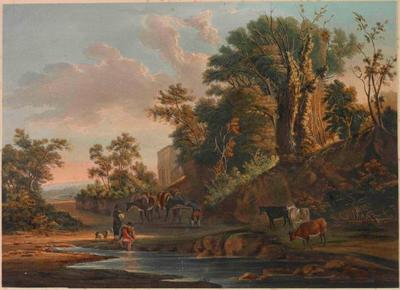 The scene appears to be set on a late summer afternoon in an idealized, elegiac Roman Campagna. Because of the painting’s poor condition there has been doubt surrounding its authorship. The attribution to Both was accepted by Burke, who dates it during the artist’s Roman years between 1636 and 1642. The attribution seems reasonable, particularly given the characteristic handling of the tree and Both’s usual method of using the silhouette of trees and landscape against a glowing sky to create a strong diagonal that stretches from corner to corner of the canvas. However, it is perhaps safer to think that it was painted in the decade after his return to Utrecht, as he painted most of his pictures during that period. While the way the light unifies the composition clearly shows the influence of Claude, Both favours a greater naturalism, which would in turn influence artists including Cuyp, Salomon van Ruysdael and Jacob van Ruisdael.

According to Smith and Denning there was another version of this Both composition in the collection of a Colonel Gray (Related works, no. 2); it is possible that that was Related works, no. 1, which was more recently on the art market.

TECHNICAL NOTES
Medium plain-weave canvas. Grey ground. Lined onto canvas; no original tacking margins remain. There is an old tear in and above the stream and an old hole in the top right-hand corner. Considerable wear to the surface has caused the figures on the bank of the lake almost to disappear, and the detail in the trees has been significantly abraded. Previous recorded treatment: 1867, ‘revived’, varnished and frame regilded; 1911, cleaned, Holder; 1996, glue paste lined, cleaned and retouched, S. Plender.

An Italianate landscape. The scene is dominated by the trees along the riverbank, illuminated by the morning sun. In the distance are a lake and a large hill.

This is a version, most probably by Both himself, of his painting in Antwerp (Related works, no. 1) [2], which is dated by Burke c. 1641–5. It has suffered from overcleaning, as Smith, Jameson and Denning noted, probably some time before the 19th century. The same landscape with different staffage (horsemen instead of shepherds) appears in a variant by Both in Schwerin (Related works, no. 2) [3]. 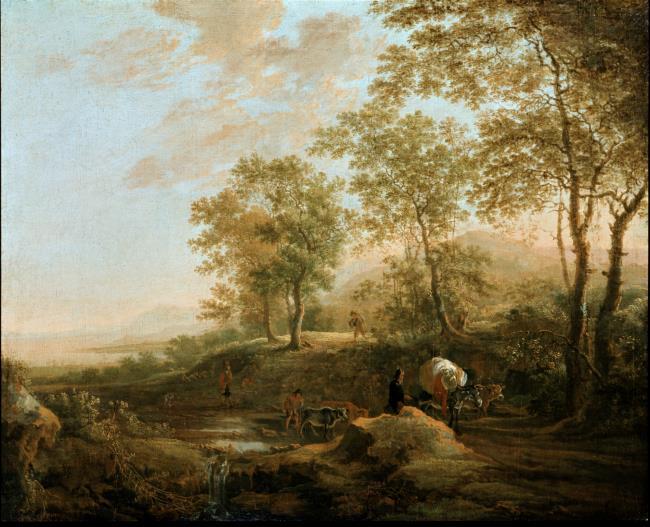 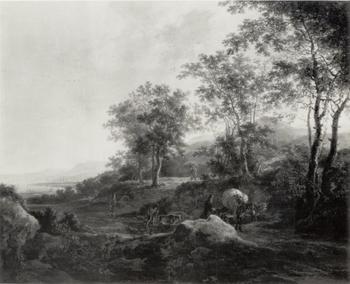 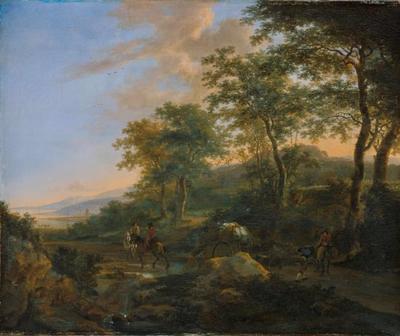 TECHNICAL NOTES
Two-member oak panel, joined horizontally. The panel has a wooden cradle on the reverse. The panel has been reduced a little on the right and probably left edges. There is some abrasion of the paint surface, particularly in the centre of the panel at the join. Some dark paint underdrawing is now visible in the trees and clouds due to an increase in transparency of the paint layers. There is some localized blanching in the left foreground, building and middle distance. The foliage has faded which probably indicates the loss or discolouration of a glaze containing a fugitive yellow pigment. Previous recorded treatment: 1866, ‘revived’, varnished and frame re-gilded; 1952–3, cleaned and retouched, Dr Hell; 1997, cradle, bars thinned and replaced, T. Reeve; cleaned and restored, S. Plender.

A Northern landscape, bathed in Southern light. Burke suggested that the painting dated from Both’s period in Rome between c. 1638 and 1642, but this is uncertain: that it is on oak panel would suggest that it was painted in Northern Europe, thus in 1642 or after. There is a French 18th-century engraving corresponding to the picture, in reverse (Related works, no. 1) [4], where it is ascribed to Jan Both and Frédéric Moucheron, and said to be in the Poullain collection. Confusingly, the accompanying text and that of the Poullain sale describe a different painting, said to be a collaboration between Moucheron and Adriaen van de Velde.35

Denning thought it formed a pair with DPG10. The two may have been placed thus in the gallery, but it was not the intention of the artist. 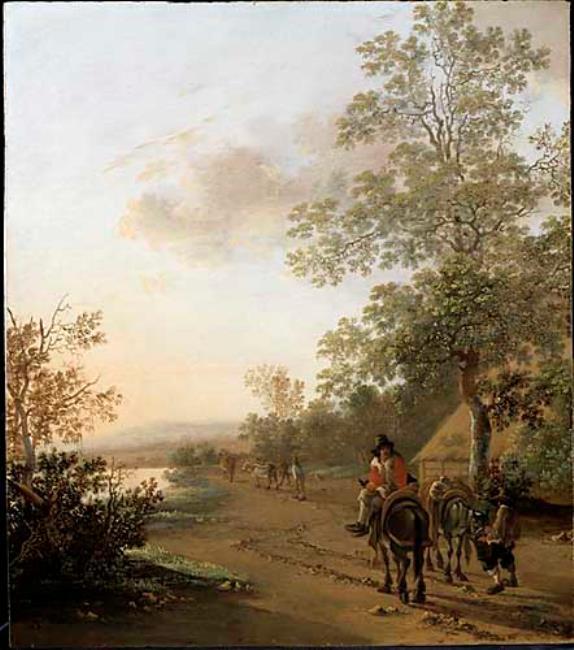 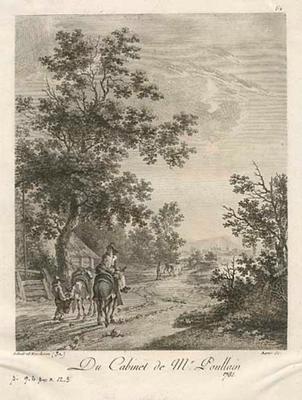 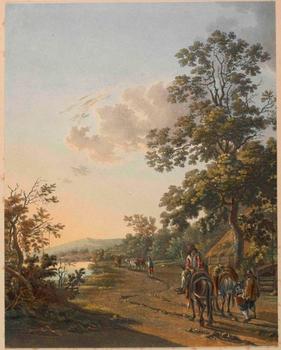 4 ‘Landscape with Cattle and Figures, is by Both, who is, we confess, no great favourite of ours. We do not like his straggling branches of trees without masses of foliage, continually running up into the sky, merely to let in the landscape beyond.’

5 ‘Next to Cuyp […] commend me to John Both, who did for Italian scenery almost what Cuyp had done for Flemish; with this difference that Both found the beauty created to his hands, while Cuyp half created it himself. In Both we have a remarkable and interesting example of the effects resulting from the curious truth and industry of a Dutch eye and hand, when employing themselves on the lovely scenery and beneath the delicious skies of Italy. […] The real fault of Both, and his only fault, is one which probably arose from his Dutch education, acting on what I must venture to call his Dutch nature. He is too nice and literal in his execution […] This Gallery is not near so rich in the works of this, upon the whole, delightful master, as in those of the preceding one [Cuyp]; but there are several very charming specimens. No. 184 [=DPG10], a sunset, is, I think, the best.’

6 Patmore 1824b gives descriptions of two pictures by Both: his nos 184, which is DPG10, and 192, which could be DPG12 or DPG15. ‘No. 184. Both. An exquisite little landscape – a sunset – steeped all over in lighted air. Both never forgot the Italian skies that he had luxuriated under in the early part of his professional life; and be the scene that he depicts what it may, he seems to look at it through a medium that tinges it with the associations which he acquired at that period.’ ‘No. 192. Both. Equal, if not superior in beauty to the preceding. Nothing can be more natural than the general effect; and yet there is an elegant and poetical air about it, which seems to point it out as a scene fit for the haunt of purer and brighter essences than those which are allied to the human mould.’

11 ‘In extremely poor condition, severely damaged by abrasion […] signature, which is no longer visible. The few remaining areas of clear detail reveal Both’s hand, as does the composition, and the whole probably dates from his Roman years. There is evidence of intense golden lighting to suggest this dating.’

16 Similarly, in Haydon 1817 there are three descriptions: see note 2 above.

20 ‘This picture has lost much of its original beauty, by injudicious cleaning.’

21 ‘§17. The foreground of Both. It is an easier matter, however, to point out the fallacy of pieces of ground undistinguished by vegetation, such as Both’s foreground, in No. 41 of the Dulwich Gallery [DPG12]. If this were meant for rock, it would come under the same category with Salvator’s above mentioned [on p. 309, DPG457, manner of Rosa] but its violent brown colour seems to mark it for earth; and I believe no eye can help feeling that the series of peaks with hollow curves between them which emerge from the grass in the centre, are such as could not support themselves for ten minutes against an April shower. […] Hence nature’s ground never by any chance assumes such forms as those of Both, and if – which it would be most difficult to do – a piece of even the toughest clay were artificially reduced to them; with the first noon-day sun, or first summer shower, she would have it all her own way again.’ According to Cook & Wedderburn (1903/2009, iii, p. 482 (note)) the passages cited above were inserted in the first and second editions between §13 and §14.

26 Similarly, there are three descriptions in Haydon, among which DPG15 cannot be distinguished: see note 2 above.

31 ‘The specimens of these masters [sic] in this Gallery are not first rate.’ Although Denning only mentions ‘Both’ as the artist, the plural here probably means Denning considered that these pictures were by the two Both brothers.

32 ‘A fine example of the golden effects in which Both excelled.’