Adriaen Brouwer [1] painted a few landscapes, but his works chiefly consist of scenes of peasants and soldiers relaxing in inns. His figures express strong emotions, almost bordering on caricature. He may have studied with his father (d. 1621/22), a designer of tapestry cartoons; according to the 18th-century biographer Houbraken he was also a pupil of Frans Hals (1582/83–1666) in Haarlem, but there is no further evidence for this. He is first possibly documented as staying at an inn in Amsterdam in March 1625, and the following year he acted as a notary’s witness at a picture sale in Amsterdam. Also in 1626 he is mentioned in connection with De Wijngaertranken (Vineyard Vines), an amateur literary society in Haarlem. In 1631/32 Brouwer appears in Antwerp as a member of the Guild of St Luke, and thereafter until his death he frequently appears in documents of that city, usually as a debtor. He was imprisoned in 1633, either because of his debts or for political reasons. Released by April 1634, he then lodged with the engraver Paulus Pontius I (1603–58), and in the same year he joined another rhetoricians’ group, De Violieren.1 He was buried in the Carmelite Church in Antwerp, a strong indication that he died in poverty.

Only a few of Brouwer’s paintings are signed, and his certain œuvre numbers only some sixty pictures. With the exception of one work on copper, all are painted on small wooden panels. None is dated, so any attempt at a chronology of his surviving works is tentative.

His early pictures seem to be those carefully painted in bright colours, resembling works by Haarlem painters such as Willem Pietersz. Buytewech (1591/92–1624), Esaias van de Velde (1587–1630), and Adriaen van Ostade (1610–85). After his move to Antwerp Brouwer seems to have chosen a more sombre palette, enlived by small areas of localised colour. The fact that David Teniers II (1610–90) at the time used a similar palette could be a sign of Brouwer’s influence. Brouwer shifted the setting of peasant genre scenes, a theme pioneered by Pieter Bruegel the elder (1526/30–1569), from the outside of the building to the interior. Less bucolic than Bruegel’s, however, his figures almost inevitably quarrel, gamble, and argue among themselves. It is not that his works celebrate these vices: rather, they are intended as moral warnings. The anger and loss of control expressed by Brouwer’s subjects is condemned not only from a Christian standpoint but also from that of the Neo-Stoicism of the humanist circles that he frequented. Brouwer was also interested in scenes involving the senses, and most particularly in a new activity in the 17th-century Netherlands, smoking. These allowed him to experiment with a variety of expressions that verge on caricature, as in The Smokers (c. 1636; Metropolitan Museum, New York) [2]. This picture, one of the two that are signed in full, includes portraits of Jan Lievens (1607–74), Joos van Craesbeeck (1605–60), Jan Cossiers (1600–71), Jan Davidsz. de Heem (1606–84) and, and a self-portrait of Brouwer. Such expressions are also present in his scenes of quack doctors and their suffering patients. A similar interest in expressions is seen in the self-portraits of Rembrandt (1606/7-1669), and it is tempting to suggest that there may have been some relationship between the two artists; certainly Rembrandt owned six pictures by him. During Brouwer’s lifetime his works were avidly collected, and the inventory of the collection of Peter Paul Rubens (1577–1640) reveals that he owned seventeen pictures by him. Anthony van Dyck (1599–1641) included him in his series of famous men, the Iconographia. Between the 17th and 19th centuries many prints were made after Brouwer’s paintings, in the Netherlands, France, Germany, Italy, and also in England. 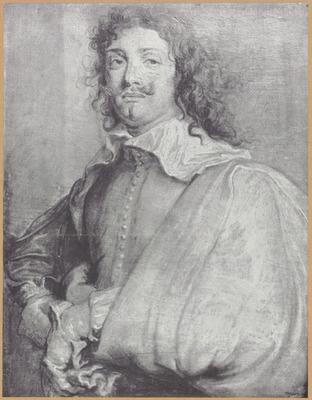 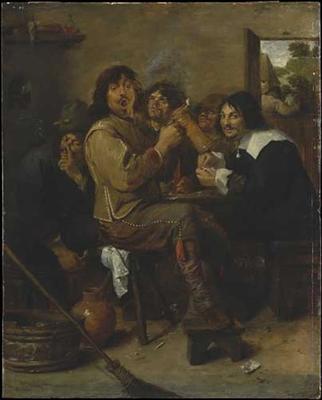 TECHNICAL
Single 5 mm thick oak panel. Warm off-white ground. Paint applied in transparent layers. A pronounced central split in the panel that has been reinforced with a batten. Insets replace broken parts of the panel in the corners. The paint layers have suffered in places from blisters and flaking in the past. There are notable (reintegrated) losses to the ground and paint layers towards the upper right corner and in the mantelpiece. The green and blue glazes appear to have become more opaque in some places but have been lost entirely in others, causing some areas to appear uneven and ‘blotchy’; this is particularly notable in the floor. Previous recorded treatment: 1867, reframed and glazed; 1953–4, cleaned and restored, Dr Hell; 1980, surface cleaned, central split secured, revarnished and retouched, National Maritime Museum, C. Hampton; 1992, flakes and blisters consolidated, panel repaired, cleaned and retouched, AMSSEE by A. Baxter.

An autograph picture by Brouwer, previously thought to be a copy of a signed picture formerly in the d’Arenberg collection, last seen publicly when it was offered for sale in 1981 (Related works, no.1) [3]. Knuttel had considered it to be a copy, on the basis of photographs; Konrad Renger echoed that opinion, although, according to his letter, he had never seen the d’Arenberg version.26 It should however be noted that the photograph in the RKD which purports to be the d’Arenberg picture is in fact an old pre-conservation photograph of DPG108.27 This has no doubt misled many scholars attempting to establish the primacy of one picture over the other.

The scene is a high-ceilinged room in a tabagien, an inn for smokers. In the left foreground two men sit smoking pipes. One, in white, wearing a cap with a small clay pipe tucked into its band, hunches forward to light another pipe. Next to him a figure in a pink overshirt and red hat leans back, with one hand on his hip, after inhaling; Knuttel noted that he might be smoking the belladonna and hemp mixture available in certain secret Flemish taverns. Behind them at another table two men drunkenly sing. In the background are more drinkers, while in the right foreground a figure in red trousers and brown shirt rests his head drunkenly on a post. His penis is hanging out of his trousers, a detail seldom seen in 17th-century Netherlandish painting, although there is a print by Willem Basse (1613/14 – 1672; previously attributed to Adriaen van Ostade) that originally showed the same; in later versions it was scratched away (Related works, no. 3).

The scene is typical of Brouwer’s œuvre in its innovative focus on the exaggerated facial expressions of its coarse participants and its basic impropriety. Hazlitt in 1824 commented that it ‘almost gives one a sick headache’. With its high quality it continues to be called a picture by Brouwer, and until the d’Arenberg picture reappears doubt must remain regarding its primacy over DPG108. 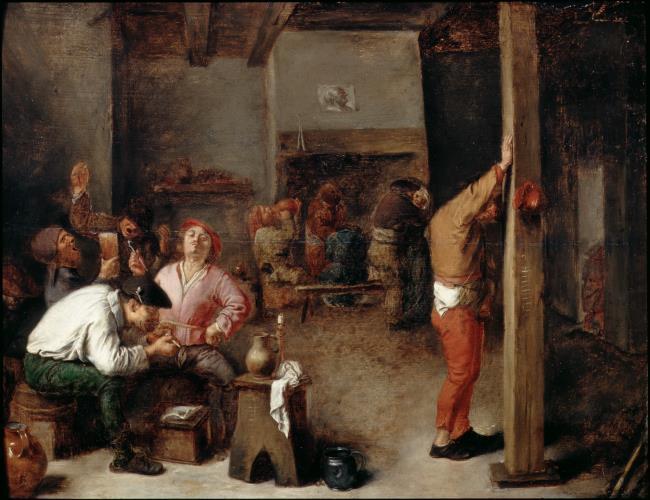 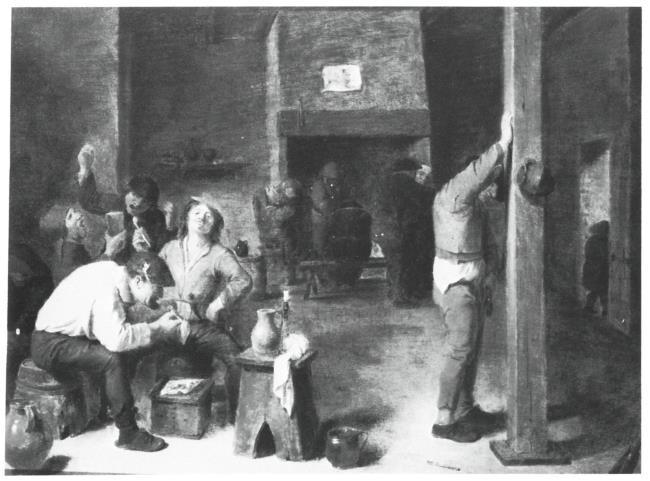 1 An old-fashioned plant’s name, Matthiola incana, or in English, stock.

3 ‘A very clever picture, giving a true representation of Flemish humble life. The colouring and pencilling excellent; and the management of the light much to be commended.’

4 ‘almost gives one a sick headache; particularly the face and figure of the man leaning against the door, overcome with “potations pottle deep.” Brouwer united the depth and richness of Ostade to the spirit and felicity of Teniers.’

5 (First Room): ‘Adrian Brauwer. This clever and spirited little piece represents the interior of an Alehouse, with Dutch boors regaling. It is full of nature and character. The expression of the man in the centre, who has taken his pipe from his mouth, and is puffing away the smoke with an air of infinite enjoyment and self-complacency, is capital. The colouring, too, is rich, mellow, and harmonious.’

6 ‘Nothing can be better in its way than this little picture. “It is enough to give one a sick-headache to look at it.” It is full of character, and the execution, in a rich brown tone, is yet clear and brilliant. Adrian Brouwer painted the scenes in which himself delighted – scenes of low debauchery – the interiors of Dutch cabarets, &c; but the man had genius, and has stamped it on all his works.’

7 ‘Interior of a Cabaret attributed to Brouwer. Full of nature and character. The expression of the man in the centre, who has taken his pipe from his mouth, and is puffing away the smoke with an air of infinite enjoyment and self-complacency is capital. The colouring too, is rich, mellow, and harmonious.’

9 ‘Not far from this fine picture [Teniers DPG299], is an “Interior of an Ale-house,” by Brower, painted with great skill of execution, and exhibiting in a coarse way, some capital studies of character’.

10 ‘There is a duplicate [inserted: ‘(?) or copy?’] of this picture at Houghton in Norfolk ascribed to Teniers. […] Poor fellow! Frank [sic] Hals made him nothing but an animal, by making him work like a galley slave, so that when he became his own master, he became also a reprobate. The life of him given by Descamps (Vol. ii, p. 129) is most melancholy. He was the Burns of Painting.’

11 ‘There is, or was, a duplicate of this picture at Houghton in Norfolk. There assigned to David Teniers.’

13 ‘The execution is very clear and brilliant; a soft, transparent brown town prevails generally. Compositions by Brouwer with so many figures are very seldom met with.’

14 ‘an excellent example of this artist’.

16 ‘Compositions by Brouwer with so many figures are very rare, and the execution of this picture is very clear and brilliant.’

17 Das eine, in zwei anscheinend fast gleichwertigen Exemplaren (in der Galerie des Herzogs von Arenberg und in Dulwich Gallery, Abb. 3) wird schon von Houbraken in Beziehung gebracht mit seiner Haft in der Festung, wo gleichzeitig (was als irrtümlich längst nachgewiesen wurde) ein Herzog von Arenberg eingekerkert gewesen sei und das Bild vom Künstler erworben habe. (One subject, in two almost equally good examples (in the Gallery of the Duke of Arenberg and in Dulwich Gallery, fig. 3 was already associated by Houbraken with the fact that he [Brouwer] was in prison in the fortress, where a Duke of Arenberg was imprisoned at the same time (something long ago proved to be wrong) and had purchased the picture from the artist.) The ‘d’Arenberg’ picture that Bode shows in fig. 3 is in fact an old pre-conservation photograph of DPG108 (see note 27).

18 ‘The squalor of his subject-matter is often offset by the beauty of his colour, and Rubens is known to have admired his work […] A replica of this picture, formerly in the Duc D’Arenberg Collection, may be the original or both may be copies of a lost original, but opinion seems to be against accepting 108 as entirely by Brouwer himself.’