TECHNICAL NOTES
Panel has a very slight convex warp. There are hemp or string fibers glued to the reverse, and the back carries the inscription ‘111’ in ink. There is very light wear in some of the brown areas. Overall this painting is in very good condition. Previous recorded treatment: 1874, surface dirt removed; prior to 1989, retouched (no record, but ‘well matched’ retouchings were noted in the 1989 Getty survey record).

Calraet produced several scenes of figures on the ice, the best known of which is the Scene on the Ice outside Dordrecht in the National Gallery (Related works no. 1), which is dated by the gallery c. 1665. Most, however, depict pleasurable outings rather than manual labour, as here. People at work are rare in Dutch and Flemish 17th-century paintings.8 The Dulwich picture seems loosely based on a comparable composition by Cuyp in the collection of the Duke of Bedford at Woburn Abbey, as Mrs Jameson already observed in 1842 (Related works, no. 2) [1]. A replica by Calraet was formerly on the London art market (Related works no. 3). 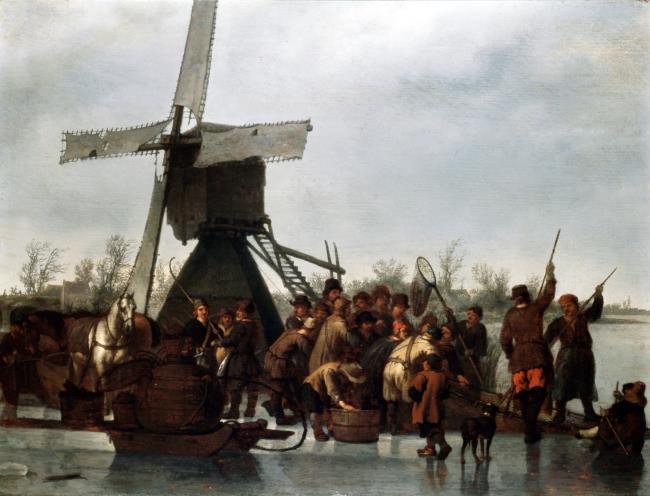 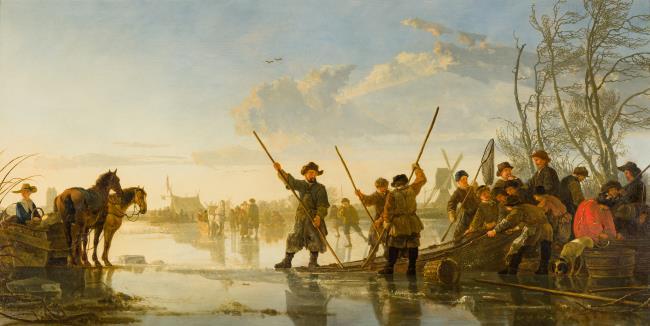 DPG296 – A Riding School in the Open Air

TECHNICAL NOTES
The panel and paint layers are in good condition. The sky displayed drying cracks which have been subsequently retouched. The vermilion and lake in the rider’s coat are worn and slightly discoloured. Parts of the landscape and foliage have suffered from discolouration. This is thought to have been caused by light damage, as an area along the right-hand edge, which had been protected by the frame rebate, remains darker and more saturated. In 1934 it was advised that the frame should be destroyed because of woodworm infestation. Previous recorded treatment: 2000, frame treated for insect infestation; 2003–4, cleaned and restored, N. Ryder.

While Calraet is generally thought of as a follower of Cuyp, the lively forms of the horses are strongly reminiscent of Wouwerman, although the style of their depiction is much more ‘finished’. A comparison with Cuyp is instructive: while Calraet’s treatment of the landscape is perfectly accomplished, it lacks the complex lighting effects of his mentor. As no secure chronology of Calraet’s work has been established it is difficult to date DPG296.

The hill and the castle in the background suggest a location in the eastern Netherlands or Germany, although they are probably not topographically accurate. 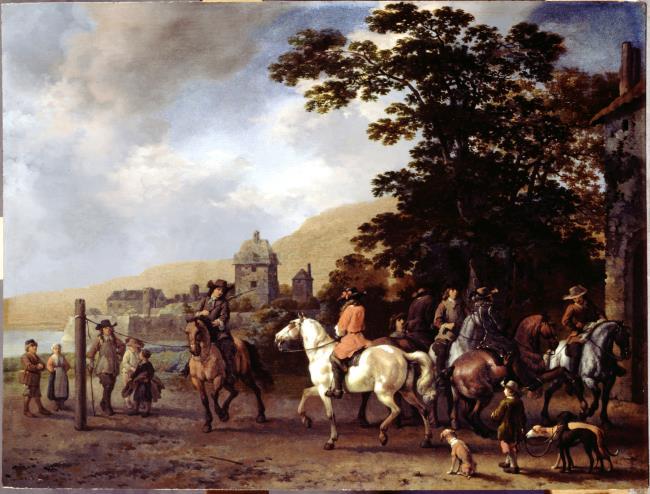 3 ‘The composition, besides being much smaller, and as a painting very inferior, is altogether different from the famous picture in the Duke of Bedford’s Collection.’

4 ‘A similar picture, but larger, is in the Duke of Bedford’s collection.’

5 ‘Winter scenes by A. Cuijp are very rare. We miss here the impression of cold air by which the objects ought to appear in sharp outlines. A similar picture, but larger, is in the Duke of Bedford’s collection.’

9 The scene here as described in Smith 1829–42, v (1834), p. 295 (Albert Cuyp), no. 28, is similar to but slightly different from DPG296: ‘Exercising of Horses. The subject is introduced in the foreground of a landscape, and consists of a number of gentlemen with attendants, trying and examining the forms and paces of horses. Among them may be noticed a gentleman on a white horse, another on a black one, and a third who has dismounted from his steed, and is holding it by the reins [instead, DPG296 shows two other gentlemen on grey horses]. A little retired from these is a boy playing with a dog [in front of them in DPG296], and more towards the middle of the view is a man riding a horse round a ring [to the left in DPG296]. Painted in the finished manner of Wouwermans. 1 ft. 8 in. by 2 ft. – P[anel]. Collection of M. Vander L. V. Slingelandt, 1785, 470 flo. 42l.’

12 ‘A picture highly finished, and very like Wouvermans. It appears to be the same picture formerly in the collection of M. Van Slingelandt. See Smith’s Catalogue, No. 28.’

13 Denning 1858 seems to have had doubts about this picture, as he first wrote ‘(after)’ Cuyp, but then deleted that; in Denning 1859 it is probably a genuine Cuyp. Denning 1859, no. 13: ‘This is probably a genuine picture, and in his first style, which is more highly finished than his subsequent manners. This is not, however, the picture in Smith’s Catalogue Raisonné No: 28 as Mrs. Jameson suggests.’ However most subsequent authors agree with Mrs Jameson.

14 ‘Also an early picture, strong in colour, and well preserved.’