DPG63 – Cows and Sheep in a Farmyard

TECHNICAL NOTES
The grain of the wood and the grey ground are visible in some parts of the sky. Areas of the paint surface have suffered damage from abrasion; the central cow is particularly worn. The painting has been heavily retouched in the trees, shadows and weeds. The resin varnish has been partially removed. Previous recorded treatment: 1949–55, partially cleaned, Dr Hell.

Catalogued as an early work by Cuyp until 1953, when it was reattributed to Abraham van Calraet. A similar composition by Calraet is on loan to the Rijksmuseum (Related works, no. 2). However both the cow and the background are different. While in Amsterdam the landscape seems to be Dutch, in Dulwich a hill or mountain is visible, which could point to Italy. The farms on the right also differ. In Dulwich the cow looks at us (as in Related works, no. 1, a repetition of the right half of DPG63, set against a different version of farmhouses), while in Amsterdam the cow looks straight ahead to the left. That cow appears again in a stable in pictures by Calraet in Brussels and Philadelphia (Related works, no. 3a, 3b). The DPG63 cow appears in a painting that is signed by Aelbert Cuyp, but attributed to that artist ‘and school’; there it is set, with herdsmen and other cattle, in a mountainous landscape (Related works, no. 4) [2].

As early as 1858 Denning expressed doubts about the attribution to Cuyp in his manuscript catalogue of the Dulwich collection. Given its monochromatic tonalities, it is easy to understand why the attribution had been made, but the spatial arrangement of the scene in two flat planes is very unlike the work of Cuyp.

The poor condition of the painting makes it difficult to be positive as to the attribution; if indeed by Calraet, it is not one of his best compositions. 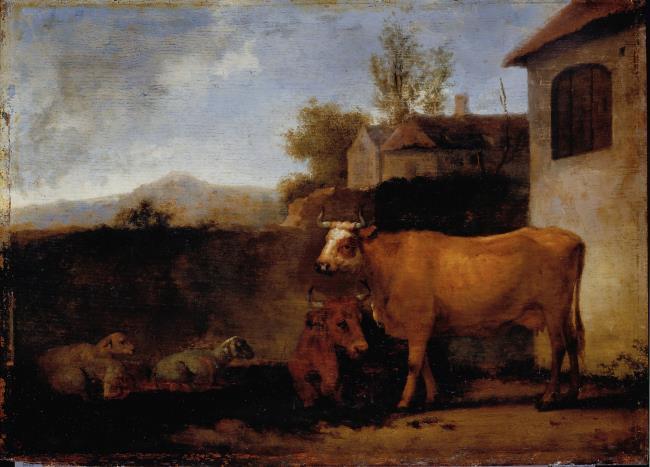 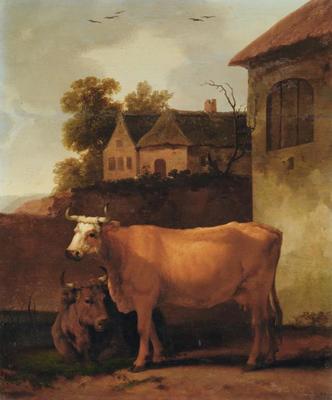 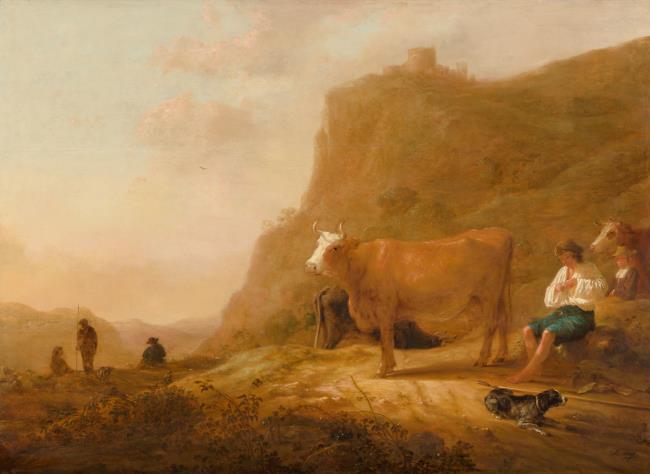 TECHNICAL NOTES
The paint is heavily abraded in the background shadows. There are pentimenti on the right of the brown horse and the vertical post. Some areas of earlier overpaint were found not to be easily soluble during the painting’s recent treatment and have been left: these include areas in the background and a highlight on the face of the man on the brown horse. Previous recorded treatment: 2004–5, cleaned and restored, S. Plender.

Calraet’s paintings of horses derive primarily from Cuyp’s interest in the subject, but in style they reflect a knowledge of Philips Wouwerman’s hunting scenes. The white horse may be inspired by examples in Wouwerman’s works, but with its small head and stiff posture it is inferior to them. Here the palette is also more monochromatic than that of those artists. During the 19th century DPG65 was paired with DPG71, also by Calraet, although the dimensions are slightly different.

Bredius in 1919 used as comparison a picture in Rotterdam (Related works, no. 2) [3] to attribute DPG65 to Calraet. Chong deems the attribution to be doubtful, while he still thinks the Rotterdam picture is by Abraham van Calraet himself. We see no reason to disagree with Bredius. 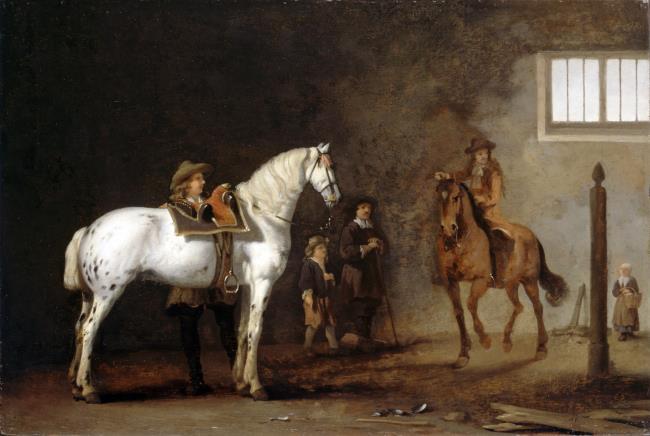 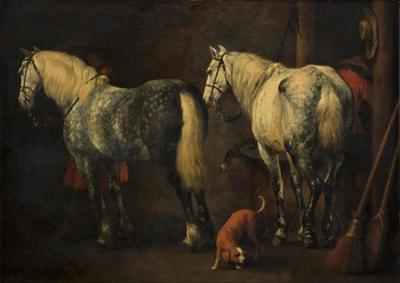 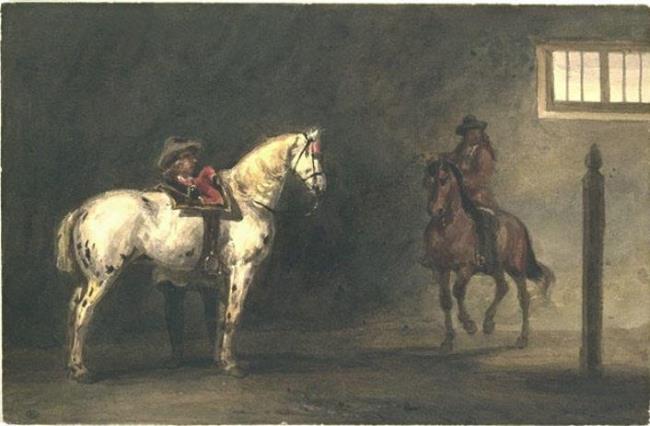 TECHNICAL NOTES
Generally in good condition. The panel has pronounced raised horizontal grain. Some red glazes in the brown horse and green leaves have faded. It has been proposed that this painting may be unfinished, and that the khaki-coloured leaves on the left and in the middle distance might be later additions. Previous recorded treatment: 2008, cleaned and restored, S. Plender; 2008, technical investigation, L. Sheldon.

Tethered horses waiting for riders frequently appear in Calraet’s work; there are examples in Rotterdam (see under DPG65, Related works, no. 2) [3], Cambridge (Related works, no. 1) [4], and St Petersburg (Related works, no. 2) [5]. Particularly when compared to the works in Rotterdam and Cambridge, DPG71 is quite loosely painted. The handling of the tree, on the other hand, is rather similar to that in the Cambridge picture. Given the artist’s sixty-year career it seems impossible to suggest a date. During the 19th century DPG71 was paired with DPG65, also by Calraet, although the dimensions are slightly different.

Writing in 1824, when the picture was attributed to Cuyp, William Hazlitt commented that ‘Nature is scarcely more faithful to itself than this delightfully unmannered, unaffected picture is to it’. Bredius first attributed DPG71 to Calraet in 1919, as Hofstede de Groot did in 1926, but it was not until 1947 that this was accepted in the DPG catalogues. As with the other paintings by Calraet at Dulwich, it has not been possible to identify the picture in Desenfans’ early inventories or sales. 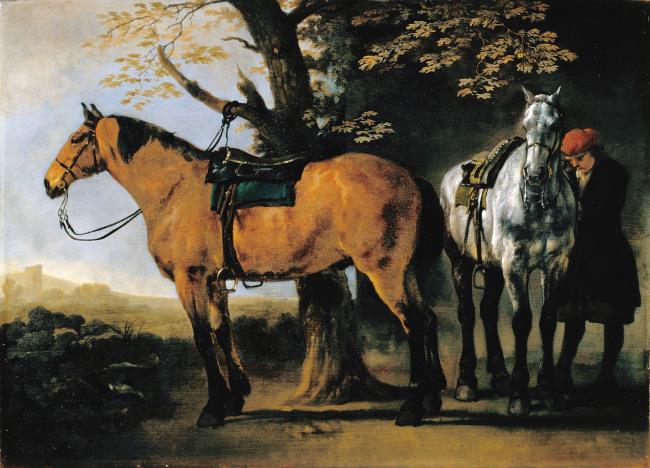 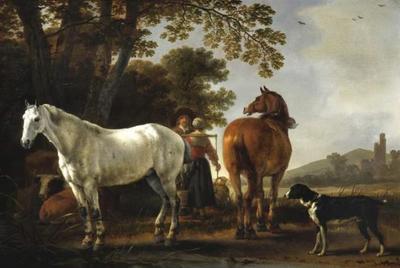 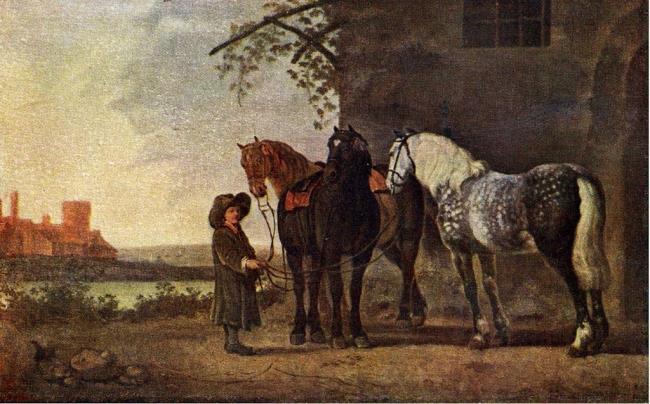 1 ‘All choice specimens of the excellencies of this great painter.’

2 ‘In the foreground are two cows, one standing, and one lying down; and on the right [?], near a tree of scanty foliage [?], are a few sheep. C[anvas] about 14 in. by 18 in.’ Although Jameson says the painting is on canvas and DPG63 is on panel, it is most likely that she was referring to it, as at the time there were no other pictures in the First Room of the Dulwich Gallery that she could be referring to. Moreover in both Cat. 1830 and Denning 1858 this is no. 5, now DPG63.

3 Where Denning had written ‘(after)’ Cuyp, he deleted the word ‘(after)’; he seems not to have made up his mind. However in Denning 1859 it is a genuine Cuyp again.

4 ‘An early work; especially clever in the representation of the broad and transparent shadows.’

10 There are three paintings that could be meant by the two descriptions ‘Horses and Figures’ in the Insurance list: DPG65, DPG71 and DPG296.

11 ‘Albert Cuyp. Interior of a Riding-house. A beautiful dapple-gray horse, with scarlet saddle, in the centre, and a horseman riding round the centre post; and a man and boy on foot looking on. The chiaroscuro, drawing, arrangement of colour, and perfection of this picture, as a whole, renders it one of the most finished productions of the Art.’

12 ‘the visitor may now turn to No. 73, a grey horse, which a cavalier is just going to mount, and another cavalier on a bay, in the interior of a riding-house; […] and the air of unmingled truth which pervades the whole of both these pictures [the other one being no. 74, DPG71] cannot be surpassed.’

13 ‘One of the finest pictures of A. Cuijp. The white horse is, with regard to light, colour, and relief, an unequalled masterpiece of its kind. W. Burger says, in reference to a very similar picture in the Museum of Rotterdam [now BvB] (No. 42), “It was these horses of Aelbert Cuijp which prevented Géricault – the celebrated French painter – from sleeping.” [n. 1. Musées de la Hollande, ii, p. 211.]’

14 After having analysed the Rotterdam painting (Related works, no. 3). Bredius says that in Dulwich there is ‘a similar picture of grey horses, certainly by Calraet’.

20 ‘Partaking of all the excellencies of the last; the horses are particularly finely painted.’

21 ‘and No. 74, a bay-horse tied to a tree, and looking away out of the picture; and a grey which a man is girthing up. The design and foreshortening of the latter, and the expression of the one that is tied to the tree, are admirable; and the air of unmingled truth which pervades the whole of both these pictures [the other one being no. 73, DPG65] cannot be surpassed.’

22 ‘another admirable specimen of this excellent painter. It is hard to say which is most true to nature – the sleek, well-fed look of the bay horse, or the bone and spirit of the dappled iron-grey one, or the face of the man who is busy fastening a girth. Nature is scarcely more faithful to itself than this delightfully unmannered, unaffected picture is to it.’

24 ‘Apparently an early work; the landscape is here treated as quite an accessory part of the picture.’

25 After having attributed DPG65 to Calraet, Bredius says: ‘Mr Mellaart believes that one or two other stable interiors [DPG71 and DPG296] in that gallery might also be the work of Calraet.’ Bredius 1919, p. 120.