?Zwammerdam near Leiden, 1622/30–Leiden, 1669/79
Dutch painter of genre scenes, often of households, workshops and peasant interiors, but also of portraits and some still lifes

Quiringh van Brekelenkam was probably trained in Leiden, probably under Gerard Dou (1613–75). He was one of the founders of the Guild of St Luke there in 1648. He continued to be active as a painter, paying his guild fees until 1667. His last known painting, a portrait, is dated 1669.

Brekelenkam’s genre scenes share their subject matter with the Leiden fijnschilders or ‘fine painters’, of whom the most famous is Gerard Dou. His pictures are however more ‘painterly’, without their careful finish. They also refrain from explicit symbolism, and do not idealise their subjects.

In the 1660s Brekelenkam moved up the social scale by beginning to paint images of society ladies receiving letters or at their toilette. Some of these show knowledge of the work of Gerard ter Borch II (1617–81).

TECHNICAL NOTES
Two-member oak panel with a horizontal grain. A small shield-shaped stamp has been impressed on the back; this may be a collector’s mark.14 The ground is warm brown in tone. There is a slight step in the repaired panel join. A small, filled, horizontal crack, starts at the lower right-hand edge. Pronounced drying cracks are notable around the fireplace, lintel and floor. In dark areas the craquelure appears squashed. There is much abrasion from previous over-cleaning. A photograph (c. 1900) shows a pot in the bottom right foreground (probably an 18th-century addition) and a jug on the table; the remnants of the abraded pot were removed in 2005 and the jug had been removed at some point prior to this – probably in the 1947–68 treatment. Previous recorded treatment: 1911, crack repaired, Holder; 1936, old holes in panel filled; 1947–68, partially cleaned, Dr Hell; 2005, cleaned and restored, S. Plender.

The damaged condition of this work has caused problems in arriving at a firm attribution. In 1804 it was ascribed by Desenfans to Brekelenkam (Brakelmkamp), then ascribed to Dou until 1892, when it was given back to Brekelenkam. The attribution, however, was rejected by Angelika Lasius in her dissertation on the painter. She considers the style gröber und flüchtiger (coarser and more sketchy) than in comparable paintings by him (she mentions Related works, nos. 1b and 1d) [2];21 she repeated her opinion without further argument in her monograph on the artist.22 Again, the condition must have influential, since the painting itself offers enough reasons for an attribution to Brekelenkam, also made by Fred Meijer of the RKD in 1997.23

From the 1630s the Leiden painter Gerard Dou popularised genre scenes of elderly women sitting in kitchens, and even sometimes eating porridge (Related works, no. 2a) [3]. A number of painters adopted the theme, among them Brekelenkam, who used it from his earliest dated work, the Woman delousing a Child of 1648, which shows a very similar old woman (Related works, no. 1a) [1], to the early 1660s.24 Gabriel Metsu (1629–67) also painted this type of scene (Related works, no. 2b) [4].

In 1842 Mrs Jameson, who still believed in the attribution to Dou, noted that it was said to show the artist’s mother, a common statement about images of elderly women in Dutch and Flemish paintings.

In 1885 the Dutch scholar Gerrit Pieter Rouffaer, comparing a painting in Geneva by Brekelenkam with DPG50 (assumed by him to be by Nicolaes Maes; Related works, no. 1b), considered the Dulwich painting to be by far the better of the two.25 Rouffaer’s point of reference was probably the painting by Brekelenkam from the La Caze collection in the Louvre, that was – and is – falsely signed N. Maes 1648 (Related works, no. 1c). Richter and Sparkes in 1880 also considered the possibility that DPG50 was by Maes.26 Were they in contact with Rouffaer?

This painting was a favourite at Dulwich. In the 19th century it was lent for study to the Royal Academy three times (in 1829, 1845 and 1875), and at the beginning of the 20th century it was chosen by the Dulwich Gallery to be illustrated in the Princess Victoria Series with highlights of the gallery. 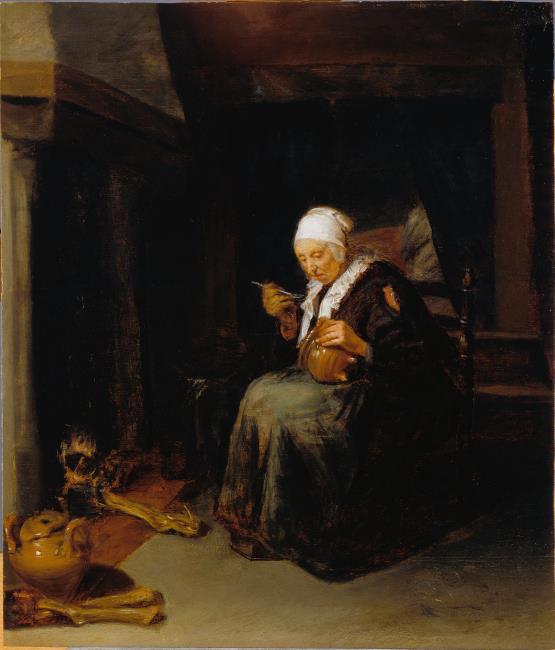 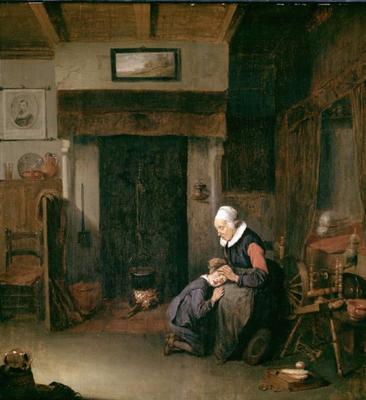 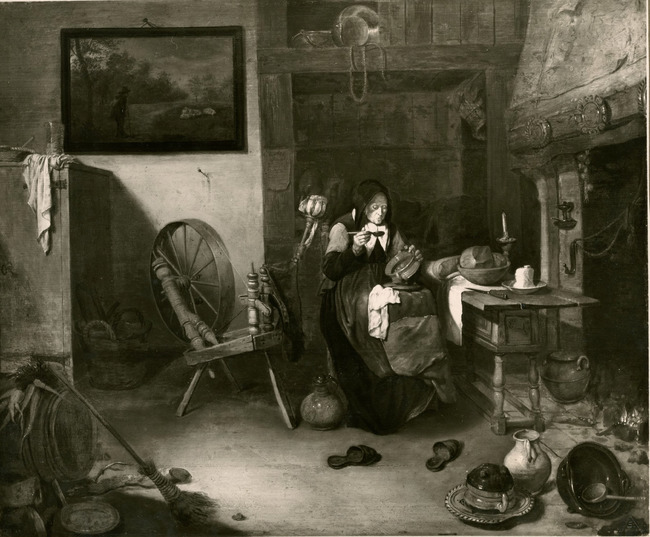 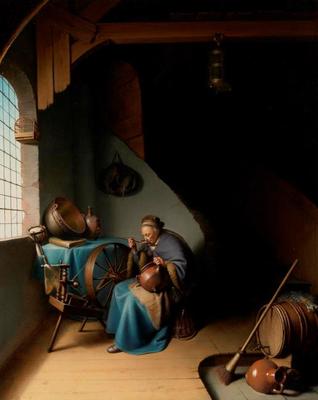 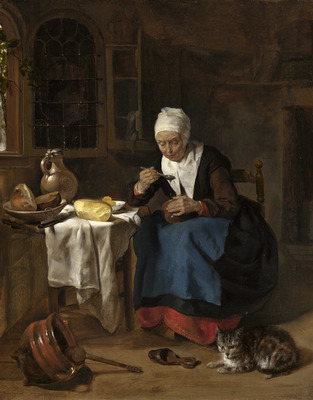 3 ‘[Gerard Douw] An old Dutch woman. This precious cabinet picture represents the interior of a room […] To what superlative excellence may genius and application carry the art of painting!! We may really believe we see the head and hands of the old woman trembling through the debility of extreme old age. It is however one of the early pictures of Gerard Douw, for notwithstanding its high finish, we easily recognise the school of Rembrandt, whose manner he then followed.’

4 ‘Gerard Douw. Old Woman eating out of a Porridge Pot, sitting before a fire and blowing the victuals contained in the spoon; the head is cleverly painted, and better than most of Douw’s.’

6 ‘An early picture, painted when Gerard Douw still imitated the forcible chiaro-scuro of his master, Rembrandt. It is said to be a portrait of the artist’s mother.’

7 ‘Gerard Dou [‘Godfrey Schalcken’ struck out] […] This was one of the pictures purchased for the King of Poland. It is said to be a portrait of his mother. If so, it must be the picture 45 in Mr Bryan’s Sale 1798. It was then sold for 14 guineas! Buchanan. Vol: 1.279 [sic]. Mr Desenfans seems to have attributed this picture to Brakelenkamp in his MS catalogue for insurance. […] I think this is by Schalcken (cf: 238) a pupil of Gerard Dow [clearly Denning had not made up his mind yet in this entry]. Descamps (vol. iii, p. 143) says that there was “A Paris, chez M le Duc d’Orleans, au Palais Royal Une femme qui mange de la soupe.” This was by Godfrey Schalken.’ Indeed this picture was mentioned by Descamps under Schalcken.

8 ‘Mr Desenfans was fortunate enough to purchase it at the sale of Mr. Bryan’s Collection(1) [(1) Cf Buchanan’s Memoirs of Painting. Vol: I, p. 279] in 1798 for fourteen guineas! It was there a Gerard Dow. It is also so called in Desenfans’ catalogue of 1802. But in a MS list of his pictures dated 1804 it is attributed to Brakelenkamp. This must mean Quirinus Brekelenkamp, who flourished about the year 1650, and was a pupil, [sic] of Dow.’

9 ‘In this remarkable picture the influence of the painter’s master, Rembrandt, is seen in the forcible light and shade. It was in the Orleans Gallery in 1798: it is engraved.’ The Orléans collection reference seems to be a mistake: see note 2 above.

10 ‘Desenfans’ Catalogue, No. 129; formerly in the Orleans Gallery. This picture has been declared to be by Gerard Dou. If it really be by this master, it can only have been painted by him when in the studio of Rembrandt, and must be regarded as a study rather than as a finished picture. In some respects, however, for instance, in the tone of the reddish brown colours, this picture recalls the earliest manner of Nicolaas Maes, born at Dort in 1632, died at Amsterdam in 1693. In his first period this painter was under the influence of Rembrandt, but later on, during his stay at Antwerp, he was influenced by the Flemish School. As, however, sufficient proofs for fixing the authorship of this very interesting picture are still wanting, its traditional name may still be kept, but not without reserve.’

12 ‘The Grandfather in Art of Brekelenkamp was Rembrandt van Rhyn and his artistic father was Gerard Dow, in whose studio he acquired some of the qualities of Dow himself and some of those of Dow’s master Rembrandt. “The Old Woman eating near a Fireplace” is a good specimen of his realism enlivened by a reminiscence of the Rembrandt touch.’

13 Anscheinend in schlechtem Zustand. Eine gewisse kompositorische Ähnlichkeit im Figurentypus der Frau und im Bildmotiv ist zu Darstellungen Brekelenkams zu erkennen, vgl. mit Kat. Nr. 110, 112, Der Malstil ist jedoch gröber und flüchtiger. Deutlich wird dies an dem am Boden stehenden Topf und an den Händen der Frau. (Apparently in poor condition. There is a similarity to Brekelenkamp in the figure of the woman and in the subject, cf. cat. nos 110 and 112. The style of painting is however coarser and more sketchy. That is evident in the pot standing on the floor and in the woman’s hands).

23 ‘I certainly stick to Brekelenkam’: letter from Fred Meijer to Richard Beresford, 12 Sept. 1997 (DPG50 file); he added copies of two index cards by Cornelis Hofstede de Groot, who saw the picture in 1914 and 1919, and who calls DPG50 Brekelenkam as well.