Various sources say Richard Brakenburgh was the pupil of the landscape painter Hendrick Mommers (1619/20–93) and of the genre painter Adriaen van Ostade (1610–85). Jan Steen (1625/6–79) is also proposed as a teacher, which would have been possible as Steen lived in Haarlem from 1660 to late 1669. From 1670 Brakenburgh worked in Leeuwarden, where he is known to have painted an equestrian portrait of Hendrik Casimir II (of Nassau). In 1687 he returned to Haarlem. In the same year he became a member of the rhetoricians’ chamber De Wijngaardranken (Vineyard Vine; 1687–95), and later of De Witte Angieren (White Carnations). In 1687 he also became a member of the Guild of St Luke. He seems to have returned to Leeuwarden intermittently. He had a small collection of paintings by French and Italian masters, auctioned after his death. Using subjects like those of Jan Steen, his works comprise a variety of low-life scenes in taverns, domestic interiors with a doctor’s visit or festive occasions such as births or the feast of St Nicolas, a few portraits, and also views of Mediterranean ports. 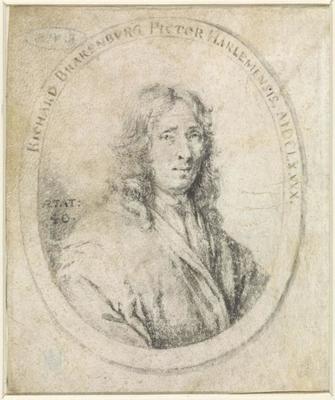 DPG621 – Celebration of a Birth

TECHNICAL NOTES
The panel has a very slight convex warp. There is a painted inscription, ‘B23’, on the reverse. The painting has been over-cleaned in the past, causing abrasion in the more thinly painted areas; the blue areas and shadows are particularly worn. Previous recorded treatment: 1951–68, Dr Hell; 2001, cleaned and restored, A. Gall.

The authorship of this painting has never been questioned. It depicts a traditional celebration of a birth. In his large artisan’s house the proud father in the foreground, wearing his apron, carries a swaddled infant, while beside him an older woman holds another child: the woman lying in bed in the background has given birth to twins. In the centre, in the light, sits the midwife, in her white apron, receiving all and holding a glass and a wine-can: she is the proverbial alcohol-loving midwife. On the mantelpiece is a painting of the Virgin and Child, an exemplary model for a family event. Durantini cites the belief in folklore that twins were the fruit of sex with two different men,7 in which case we might be intended to see the mother as a libidinous contrast to the Virgin.

The birth of twins was a popular subject in the work of Brakenburgh, who painted at least ten versions of the theme.8 Jan Steen, earlier, also painted the celebration of the birth of a child. In one of his pictures the father is openly ridiculed: the young man behind him makes a gesture, giving him horns – the sign of the deceived husband (Related works, no. 1) [2]. While Brakenburgh’s painting is decidedly less blatant, it is likely that there is a connection between Steen’s picture, though it shows only one baby, and Brakenburgh’s depictions of twins, playing on the proud new father as an object of ridicule.9

A similar interior appears in Brakenburgh’s Workhouse Scene (Related works, no. 4). He returned to the theme of the celebration of a birth in another signed picture, which also features twins (Related works, no. 2a) [3]. The woman with a white cap sitting to the left of the father here is shown standing in the middle of a picture of a Country Inn in Amsterdam (Related works, no. 5) [4]. 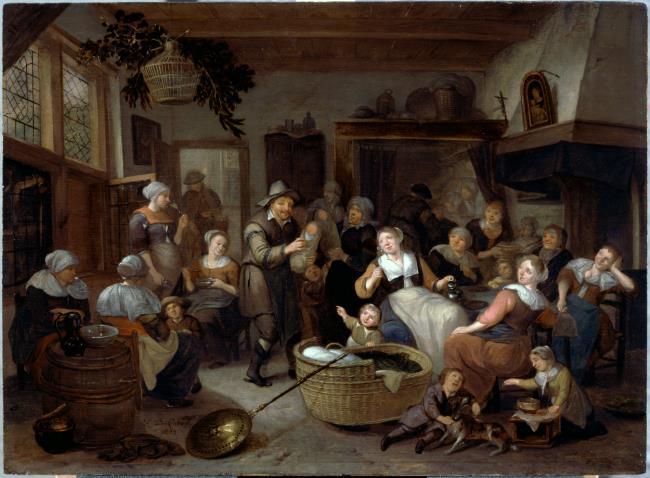 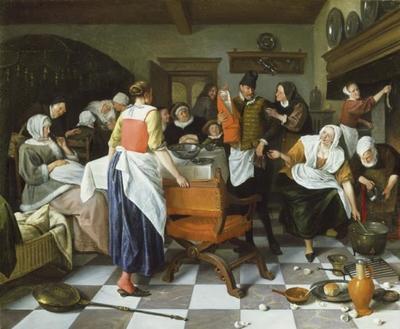 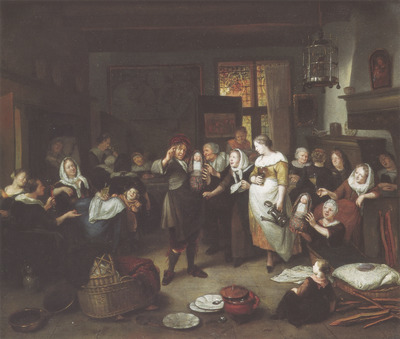 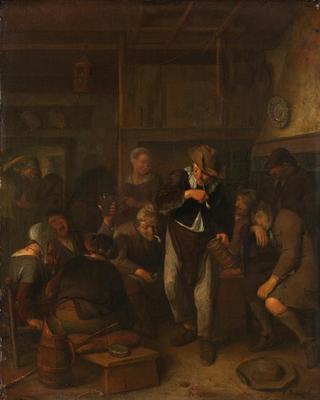 1 GPID (20 Sept. 2012): the only Brakenburg that might be a Celebration of a Birth was sold at Rijp, Rotterdam, 11–13 June 1808 (Lugt 7429), lot 30, but it was much larger: Een Kraamkamer, vol Gewoel, van meer dan Dertig Beelden en een aantal verschilderd Bywerk, aangenaam, geestig, dun en helder geschilderd; doek, hoog 32, breed 37½. (A nursery, full of activity, with more than thirty figures and some other painted details; pleasantly, wittily, thinly and brightly painted; canvas, Dutch dimensions).

2 DPG621 was bequeathed to Dulwich by Miss Gibbs in 1951, along with five pictures by other artists (After Adriaen van Ostade, DPG619; After Antoine Watteau, DPG620; Circle of David Teniers II, DPG622; Joseph Vernet after Claude, DPG623; attributed to Abraham Pether, DPG624). For DPG 624 see Ingamells 2008, p. 215. Nothing is known of their earlier provenance.

3 ‘Sir Gerald Kelly reports that a bequest of 6 pictures, contemporary copies of Teniers, had been made to the Picture Gallery in the Will of Miss Gibbs of Clifton House, Datchet.’