Govert Camphuysen was born in Frisia, when his family, which was from Gorinchem (Gorkum or Gorcum) near Dordrecht, was in exile for religious reasons because his father was a preacher.1 By 1643 he was active as a portrait painter in Amsterdam and in 1647 he married there, the register describing him as being twenty-three years of age and ‘from Gorcum’. He must not have been successful, as in 1652 his house in Kalverstraat and his possessions were inventoried and sold to pay off his debts, and in July that year he is recorded as working in Schleswig-Holstein. Three years later he was working in Sweden for the Dowager Hedvig Eleonora, Queen of Sweden (1636–1715) and as a portraitist for the Chancellor, Count Magnus Gabriel De La Gardie (1622–86). He is recorded there again in 1659, 1661 and 1663. He was back in Amsterdam in 1665, and in 1667 he drew up his will.
Most of Camphuysen’s work consists of animal paintings in the style of Paulus Potter (1625–54) and landscapes that share the unusual light effects and perspectives of Aert van der Neer (1603–77). He also produced a number of topographical views, most notably of Stockholm Castle (1661; Municipal Museum, Stockholm).2

He is not mentioned in any of the 17th- and 18th-century handbooks with biographies of painters. Thoré-Bürger in 1860 was the first to try to establish the work of the members of the Camphuysen family.

TECHNICAL NOTES
The panel has a slight warp and there is old worm damage in the bottom panel. Some paint passages are thin, such as the tree, which is rather abraded. There are horizontal retouchings in the sky. In 1880 the painting bore a forged signature, Paulus Potter; this is thought to have been removed when the painting was cleaned in the 1950s, revealing Camphuysen’s initials. Cleaned and restored by Dr Hell in 1952–3.

As the other works attributed to or after Paulus Potter at Dulwich do not include figures, it is likely that this is the picture bought by Bourgeois in 1798. In the 1813 inventory by Britton, however, it is said to be not by Potter but by ‘I. Ostade’.9 In 1817 it was a Potter again, due to a forged signature, which was presumably removed by Dr Hell in 1952/3. It was first attributed to Camphuysen in 1880 by Richter, a suggestion confirmed by comparison with other signed works by the artist, notably examples in Montreal (Related works, no. 1a) and in the Wallace Collection, London (Related works, no. 1b) [1], considered to be Camphuysen’s masterpiece and dated c. 1650. Because of the similarity DPG64 can also be dated c. 1650. A signed picture in the Pushkin Museum, Moscow (Related works, no. 1c), is also very close in style and composition, in the proportion of the figures and their relation to the buildings in the background.

Like Potter, Camphuysen excelled in naturalistic rustic scenes, concentrating on realistic detail and the farmers’ close relationship with the earth. According to Richter and Sparkes in 1880 the scenery and costumes are Westphalian. 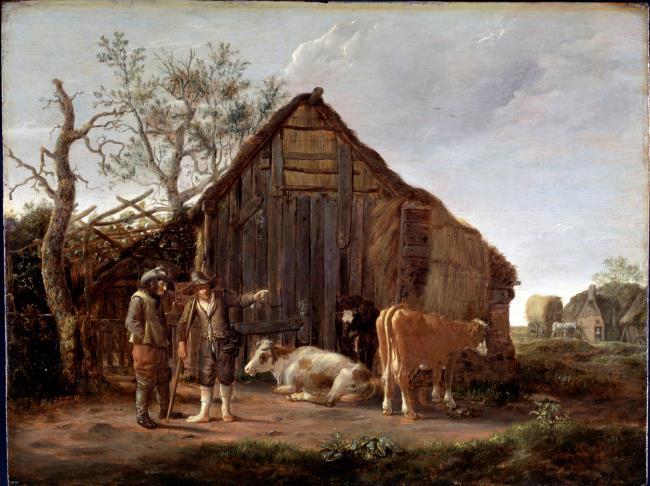 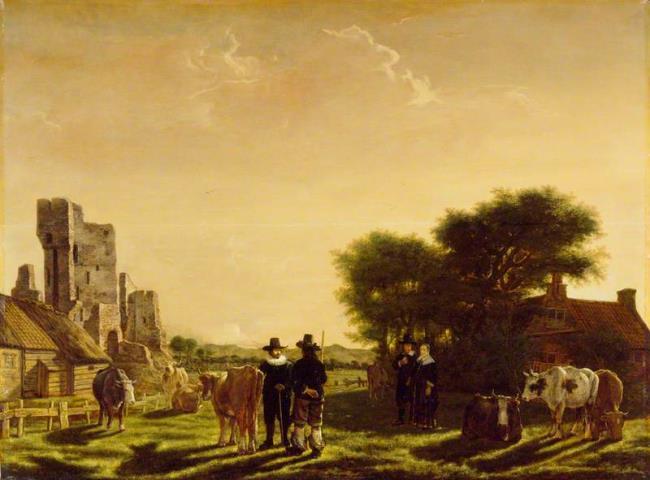 5 ‘Both the scenery and the costumes of the figures are Westphalian. The signature, “Paulus Potter,” on this picture, is certainly a forgery, and doubtless the only reason for the attribution of this picture to Paulus Potter, with whose genuine works it cannot be confounded; but it agrees in every point with the given characteristics of G. Camphuijsen.’

6 Bernt 1970, i, fig. 220. It was suggested later that this picture was in the National Gallery of Canada, but on the website of that gallery no Camphuysen is mentioned (5 March 2017).

9 There it had as its pair a picture said to be by ‘A. I. Ostade’ (DPG16), which is now considered to be by Jakob van Mosscher.