TECHNICAL NOTES
Three-member oak panel with horizontal grain. Areas of the sky are thinly painted, allowing the wood grain to show through; highlights are thicker. The panel has a slight concave bow. There is an old split between the two upper members, which has been mended with a gap between the two parts at the left side. There is some paint and ground loss in the upper centre of the sky. A large area of thick overpaint is visible in the top left. Previous recorded treatment: 1949–70, Dr Hell.

DPG192 is partly based on an authentic Cuyp now in a Dutch private collection (Related works, no. 1a) [1]. Behind the cows in the centre is a river, with houses and a tower on the opposite shore. The cows are largely in shadow, and in the blue sky the sun is breaking dramatically through the clouds. According to Sparkes this is a view near Dordrecht, but Cockburn calls it a view near Utrecht. The same grouping of cattle appears in a large number of copies by Cuyp’s followers, with slight variations (for example Related works, no. 1c) [3]. Alan Chong considers that it was painted by the 18th-century Dordrecht artist Jacob van Strij (see Related works, nos. 2a, 2b) and it was included in the 2016 Dulwich catalogue as such.17 However according to Sander Paarlberg DPG192 belongs to a group of three Cuyp imitations, which also includes a painting in the Dordrechts Museum (Related works, no. 2c) [4] and a picture that was at auction in New York in 2005.18

DPG192 was very much appreciated by 19th-century writers as an Aelbert Cuyp. Several of the authors who wrote about the Dulwich collection were charmed by it, including Mrs Jameson, Waagen, Denning, Richter and Sparkes. Moreover, it was chosen by the Penny Magazine in 1841 for discussion and illustration as an Aelbert Cuyp (Related works, no. 3b); Keeper Ralph Cockburn chose to include it in his series of reproductions of Dulwich pictures (Related works, no. 3a) [5], and the Royal Academy chose it to be copied by its pupils in 1839. 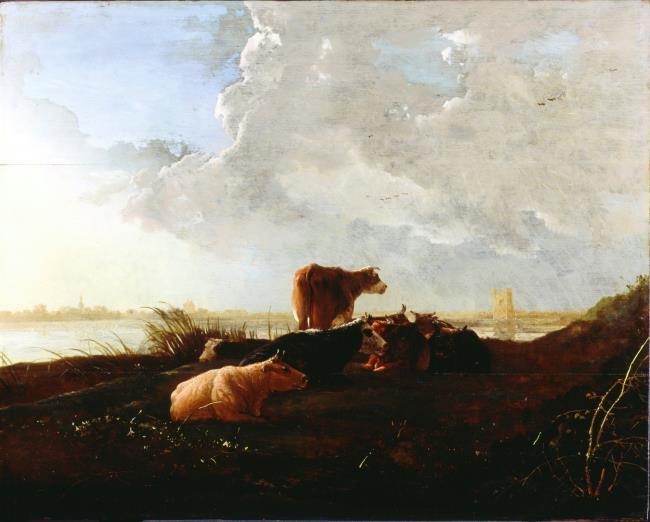 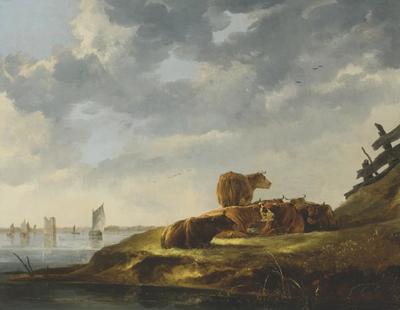 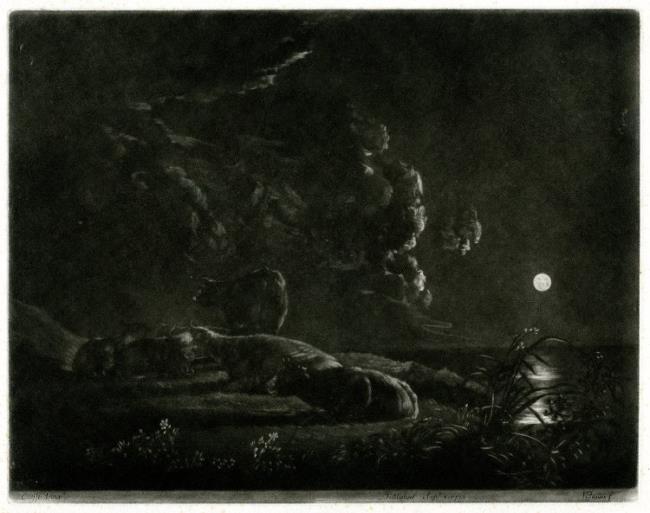 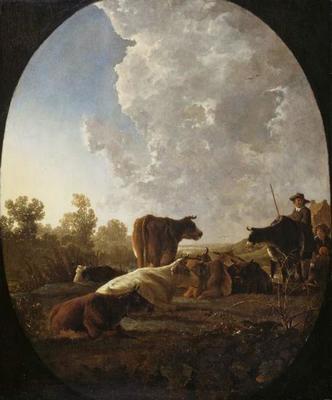 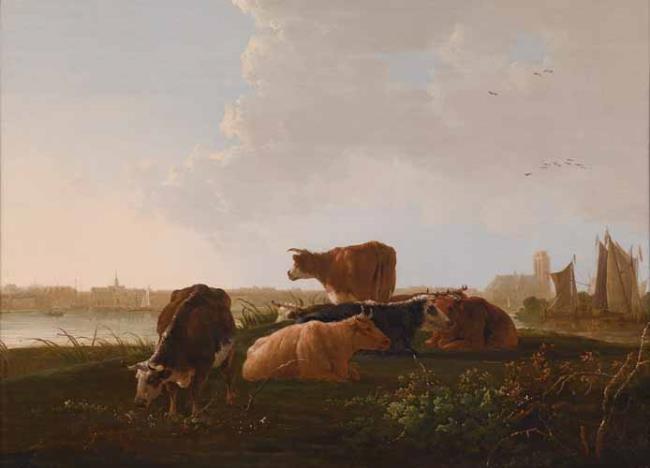 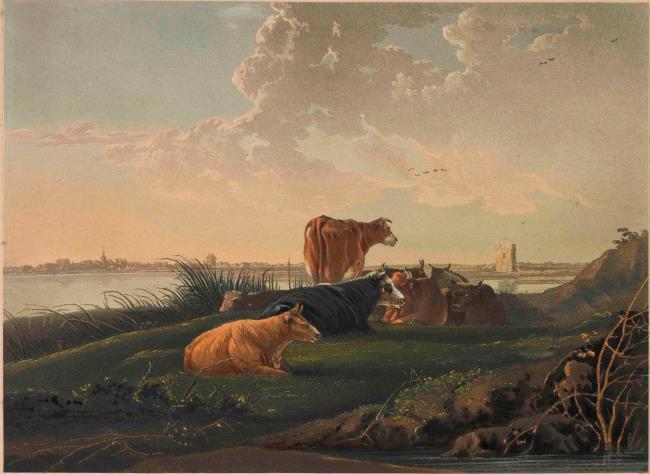 TECHNICAL NOTES
Two-member oak panel with horizontal grain. The panel has a slight warp; the horizontal join is very noticeable. The painting is not in good condition and has suffered from extreme blistering and flaking with some small areas of complete loss of paint and ground. Attempts were made to consolidate the flaking in the 1990s, but the paint remains in a fairly poor state. The painting is very dirty, with losses and cracking. Previous recorded treatment: 1991, surface cleaned and consolidated, V. Leanse; 1994, flaking secured, N. Ryder.

The picture shows a broad landscape with a river. On the right are two shepherds, one standing, one reclining, in front of some trees. The standing shepherd is in almost the same position as the shepherd in View on a Plain with Rhenen in the Distance (DPG4).

The painting is a copy of a Cuyp that was at auction in New York in 2008 (Related works, no. 1) [6]. It is conceivable that the copyist was Bourgeois: in 1816 Hazlitt noted that ‘At one time he [Bourgeois] copied the old masters. One of these copies after Berghem [Berchem], but in the style of Wouvermans, is a good imitation, pencilled with great labour and exactness, but not with the freedom of an original.’25 A ‘Cuyp’ that was displayed in the Gallery in the 19th century is now thought to be by Bourgeois (DPG135).26 Bourgeois is also said to have painted the cattle in the foreground of Cuyp DPG60 (removed in 1998). 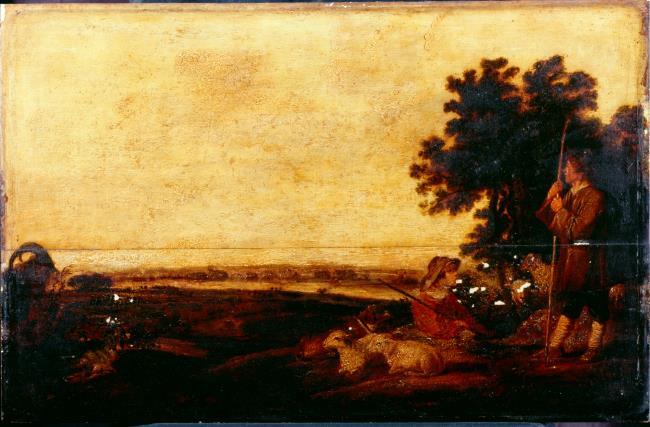 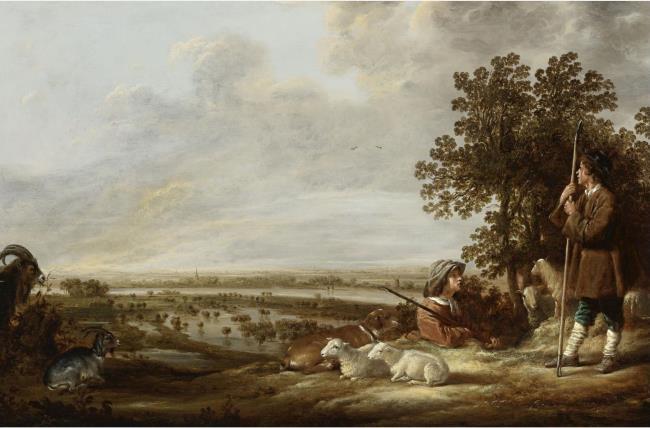 1 ‘Albert Cuyp. Landscape with Cattle. The cattle in this picture form the principal [sic]; and a flat meadow country, through which a river passes, with a village in the distance, the accessories. It is needless to add that it is a fine picture.’

3 ‘A very beautiful picture, breathing the repose of a soft summer evening.’

4 ‘The contrast between the dark-coloured animals and the clear water is very striking; the impasto admirable […] (No. 239).’

6 ‘The deep tones and the impasto in the foreground are in striking contrast with the delicate vapour which envelops the background. A very fine work of the master.’

9 For information about the Kremer Collection see http://www.thekremercollection.com/art (Aug. 13, 2013).

13 Chong 1993, pp. 463–4, no. C 51 (Rejected works): ‘In poor condition. Not seen. Partially damaged in the sky. But otherwise in excellent condition [sic]. Hofstede de Groot said the work was from Cuyp’s last period. The group of cattle is derived from Cat. B 13 [= Related works, no. 1a]. Both this work and the almost identical painting in Dulwich are by Jacob van Strij, and are very close in handling and composition to Cat. C 51.’

15 Sander Paarlberg in an email to Rieke van Leeuwen (March 2020) strongly doubts the attribution of DPG192 to Jacob van Strij. ‘The work belongs stylistically and in the way the cows are depicted in a group of Cuyp imitations, which also includes the painting in the collection of the Dordrecht Museum (DM/010/943; bought as Jacob van Strij and so it is also on the museum’s website, but it is not his hand). Technical research so far indicates that it has nothing to do with Van Strij, nor has the Dulwich picture.’ See also Paarlberg 2020, p. 247 (note 23), as ‘belonging to a group of related compositions that, however, refer more directly and emphatically to [Aelbert] Cuyp [than the works of Jacob van Strij], and where the attribution to Jacob van Strij is uncertain’. In this note not only DPG192 is mentioned but also a third picture as belonging to this group: sale Christie’s, New York, 25 May 2005, lot 262, with ill. (as attributed to Jacob van Strij). See also his explanation in his email of 3 Oct 2020, mentioned in note 192, with many thanks.

18 ‘Albert Cuyp. Landscape, with Sheep and Goats. One boy is standing in the fore-ground, and another seated is conversing with him.’

21 ‘A pasticcio, painted in imitation of A. Cuijp by a late artist’.