DPG96 – An Evening Ride near a River 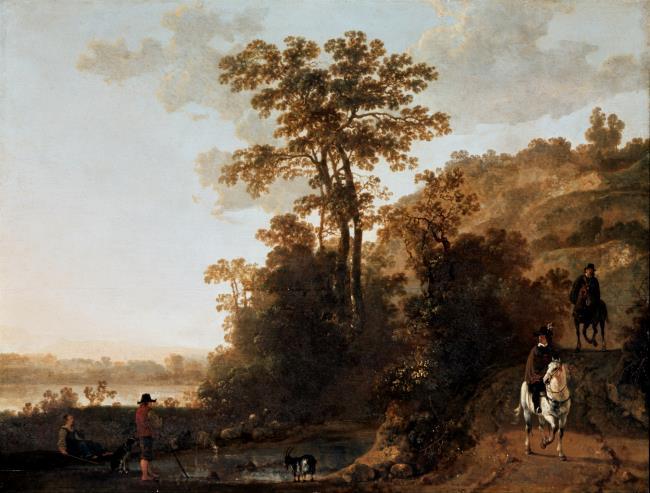 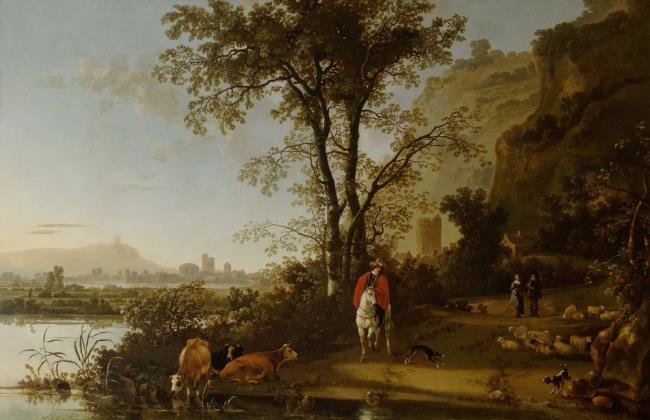 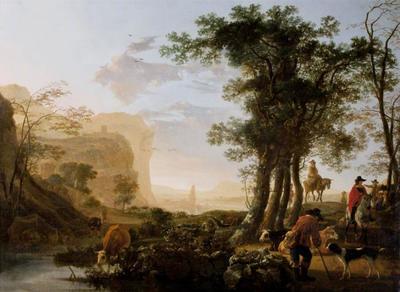 TECHNICAL NOTES
Two-member oak panel. The panel has a slightly uneven join and a light concave warp. On the reverse there is evidence of a previously removed cradle or battens. There is a secure crack at the bottom left of the panel, above the signature. Some pigment blanching has occurred in the bank behind the figures and in the leaves of the trees, and some of the foliage appears slightly abraded. There is some (retouched) damage to the sky, particularly in the top right. Previous recorded treatment: 1915, crack repaired, cleaned and varnished, Holder; 1952–5, Dr Hell; 1973–4, ?cleaned and retouched, C. Mealey and J. Brealey; 2010–12, conserved, S. Plender.

A relatively small painting, of a late afternoon scene lit by the setting sun. It was probably painted in the 1650s. Conservation in 2010–12 restored the fine details in the landscape that had been lost. The absence of these details had led Reiss and Chong to doubt the identity of the painter, despite the broad and strong composition. The contrejour is typical of Cuyp, and the signature seems genuine and contemporary with the picture. An Evening Ride near a River is similar in composition and handling to another picture related to Cuyp in the Rothschild collection (Related works, no. 1a), and Chong suggested more general similarities with a Cuyp picture at Waddesdon Manor and a Calraet at Kedleston (Related works, nos. 1b, 1c) [1-2]. The horseman in the foreground also appears in a Cuyp picture in Cardiff and in one in the Royal Collection (Related works, nos. 1d [3] and 1e). The motif of the horseman was also used later in Cuyp’s home town of Dordrecht by Cornelis Vermeulen, from the same city (Related works, no. 1g). And it seems that just as in the much earlier Landscape with Cattle and Figures (DPG348) Cuyp was using one of the prints after his father’s drawings for the goat (Related works, no. 2a [4], reversed, or he may still have had his father’s original drawing, which is no longer known.

In 1769 the picture belonged to John Barnard, one of the foremost collectors of his day, with as its pair a painting by Jan Asselijn and Nicolaes Berchem. Both were engraved by Thomas Major, the Cuyp being called The Contented Peasants (Related works, no. 2b) [5]. During conservation in 2010–12 pinpoint holes were discovered on the edges of the panel, made in the process of ‘squaring up’; a grid placed over the painting would aid a printmaker in the transfer of the composition to a plate for printing, and these marks are likely to date from the time when Thomas Major made his print [7].

This could be the Cuyp in Barnard’s collection in 1761 that was described as ‘Landskip with cattle and figures by Cuyp’. It seems likely to have passed on Barnard’s death to his nephew, Thomas Hankey, who put it up for auction in 1799, when it was bought by Bourgeois. It is difficult to locate An Evening Ride near a River in Desenfans’ and Bourgeois’ subsequent records. 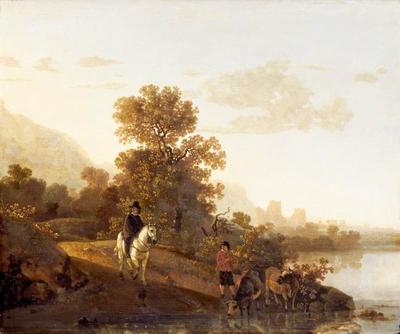 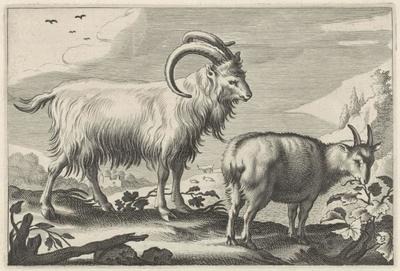 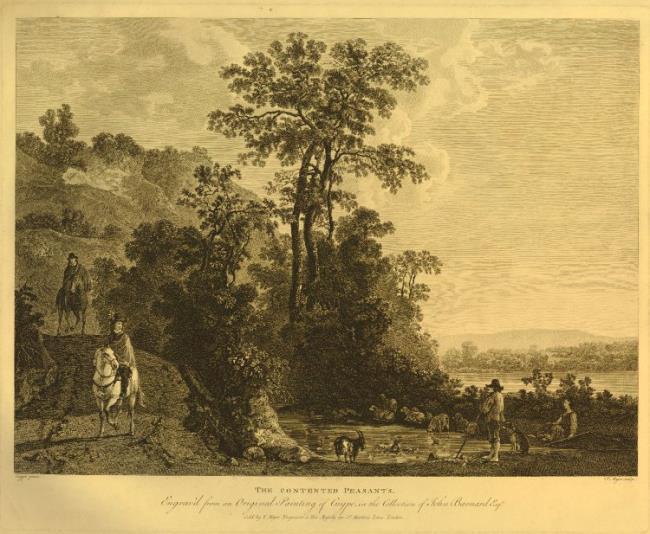 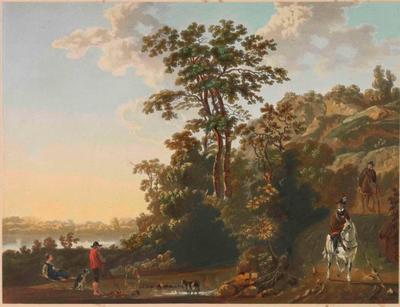 7
The panel with pinpoint holes

TECHNICAL NOTES
Medium plain-weave canvas. Grey ground. Glue paste lined. The original tacking margins are absent and the original canvas is slightly smaller than the stretcher, measuring 113.2 x 168.8 cm. There is a region of discolouration in the middle of the bottom edge, where it is thought that a glaze containing a fugitive yellow pigment has faded. This has been re-toned. The painting previously suffered from extensive blanching which was successfully treated during the 1993 restoration campaign. Previous recorded treatment: 1864, lined, Morrell; cleaned, Merritt; 1977, blister-layed, surface cleaned, reformed using E. Jones mixture, restored, National Maritime Museum; 1993, relined, A. Reeve; cleaned, blanching treated, retouched, P. Lindsay.

This bucolic evening scene is a late work, probably c. 1660. The raking evening light and silhouetted trees, and the division of the landscape into two sections, reveal an appreciation of Jan Both, who had returned to the Netherlands from Italy in 1641. Similar effects can be seen in Cuyp’s Evening Landscape of about the same date (Related works, no. 1) [8]. The buildings on the far side of the lake also appear in Cuyp’s Page with Two Horses of the mid-1650s (Related works, no. 2).

It has not proved possible to trace the provenance of DPG124 before its appearance in Desenfans’ ‘Polish’ sale in March 1802. 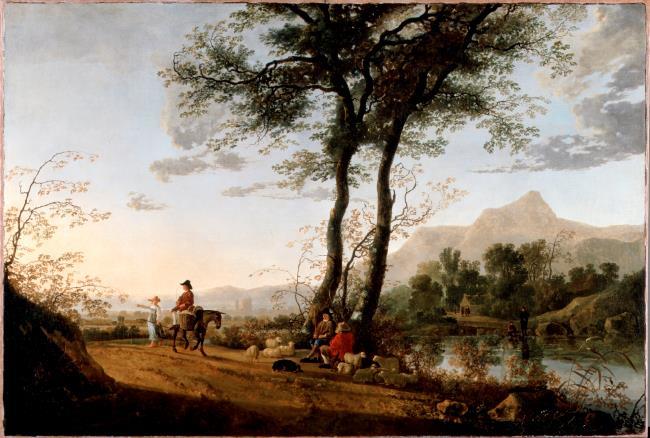 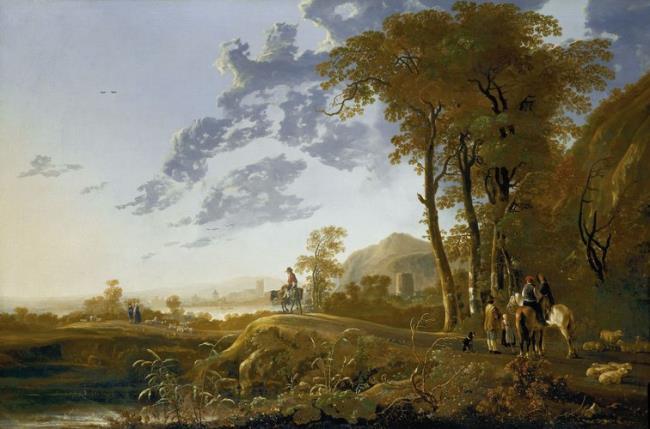 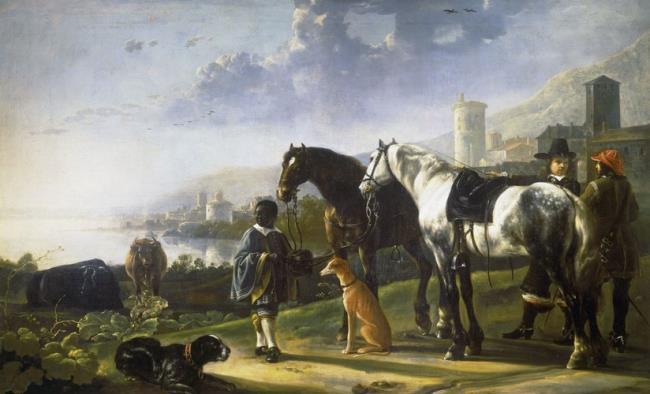 3 ‘A landskip with cattle and figures, by Cuyp, its companion [as painted by Asselijn and Berchem, engraved by Major]. The sun-shine, for which this master is so famous, is particularly fine in this picture.’ In the collection of John Barnard, Berkeley Square.

4 ‘Another excellent specimen […] This picture is finished in parts with great care, and contains more variety of objects than this artist usually introduced; but they are all blended together, not contrasted, and contribute to produce but one impression.’

7 ‘This picture is finished in parts with great care, and contains more variety of objects than this artist usually introduced, but they are all blended together, not contrasted, and contribute to produce one impression.’

10 ‘Especially attractive by the rich golden tone of the evening light, and by the warm shadows in the foreground.’

11 Hofstede de Groot follows Smith in suggesting that DPG96 was the picture sold at Christie’s on 14 May 1802. This is incorrect: see note 6 above.

12 ‘The signature seems perfectly authentic, but Reiss rejects the attribution.’

13 ‘The attribution to Cuyp was rejected by Reiss. Chong suggests that the picture is by a pupil working under Cuyp’s supervision.’

24 It is possible that the picture was acquired for King Stanislaus Augustus Poniatowski, but there is no firm evidence.

25 Desenfans 1802, pp. 143–4, no. 142: ‘A Landscape with Cattle and Figures […] The fore-ground of this, represents the highway, on the right [NB in the descriptions in this catalogue, left and right are reversed] of which, is a shepherdess, dressed in blue, a straw hat on her head, and her crook in her hand; she is walking in conversation with a countryman mounted on a mule loaded with panniers, who seems to be passing by chance – a beautiful cluster of trees is in the centre, at the foot of which are two shepherds surrounded with sheep and their dogs – the left is enriched with shrubs and bushes, lining the bank of a river which is on the other side of the road, and in which two men thrown rather into the back-ground, are angling. At some little distance from them, are other figures at the door of a cottage beautifully surrounded by trees. The next objects are some mountains, which are detached with a masterly hand from a warm and silvery sky of the most fascinating effect. On canvas.’

27 ‘This is a lovely picture, and much more elaborate than the preceding one [Patmore’s no. 3, DPG128]; but there is not that mysterious and poetical character which I seem to feel in the other: you can remember every part of it, and think of each separately; but of the other you can only remember the general effect.’

28 A copy of Cat. 1830 in the Library of DPG has handwritten crosses in the margins (by E. or C. Carson), from two to five. Like An Evening Ride near a River (DPG96), this work gets four crosses.

30 ‘This is a landscape consisting of two departments, divided from each other by a set of those light and elegantly foliaged trees which Claude so frequently ran up in the centre of his pictures. Its right hand department is a secluded spot shaded from the sun, and has a pool of clear water to make it still more cool, and two silent fishers to make it still more silent; while the left is all open, stretching away into the distance, and misty with heat, the hills seeming to quiver through the mist, as objects so that you see beyond an open space of sand and earth, from which the heat is rising; while over the mountain’s head a few fleecy clouds are hovering, as if they loved it and longed to rest upon it.’

32 120 ‘§7 Niggling, therefore, essentially means disorganized and mechanical work, applied on a scale which may deceive a vulgar or ignorant person into the idea of its being true: a definition applicable to the whole of the leaf-painting of the Dutch landscapists in distant effect, and for the most part to that of their near subjects also. […] Cuyp and Wouvermans, as before stated, and others, in proportion to their power over the figure, drew leaves better in the foreground, yet never altogether well; for though Cuyp often draws a single leaf carefully (weedy ground-vegetation especially, with great truth), he never felt the connection of leaves, but scattered them on the boughs at random. Fig. 1 in Plate 54 is nearly a facsimile of part of the branch on the left side in our National Gallery picture [i.e. NG53]. Its entire want of grace and organization ought to be felt at a glance, after the work we have gone through. […] The average conditions of leafage-painting among the Dutch are better represented by Fig. 2, Plate 54, which is a piece of the foliage from the Cuyp in the Dulwich Gallery, No. 163 [=DPG124]. It is merely wrought with a mechanical play of brush in a well-trained hand, gradating the colour irregularly and agreeably, but with no more feeling or knowledge of leafage than a paperstainer shows in graining a pattern. A bit of the stalk is seen on the left; it might just as well have been on the other side, for any connection the leaves have with it. As the leafage retires into distance, the Dutch painters merely diminish their scale of touch. The touch itself remains the same, but its effect is falser; for though the separate stains or blots in Fig. 2, do not rightly represent the forms of leaves, they may not inaccurately represent the number of leaves on that spray. […] But in distance, when, instead of one spray, we have thousands in sight, no human industry, nor possible diminution of touch can represent their mist of foliage, and the Dutch work becomes doubly base, by reason of false form, and lost infinity.’

33 ‘This picture was No. 142 in Desenfans’ Catalogue. Under this picture he gives an interesting narration respecting the first importation of Cuyp’s works into this country.’

34 ‘A masterpiece of the artist, conspicuous by its broad and skilful execution’.

41 It is doubtful that this was the ‘Landscape with Figures’ lent to the RA in those years: see notes DPG128, note 59 and this page, note 36.