Heusden, near ’s-Hertogenbosch, 1604/5–Arnemuiden, 16 May 1671
Dutch painter of architectural subjects

Dirck van Delen was possibly a pupil in Delft of Pieter van Bronckhorst (1588–1661) and/or of Bartholomeus van Bassen (c. 1590–1652), who also painted architectural fantasies. He lived with his parents in Breda, is mentioned in Middelburg, where he married in 1625, and then moved to nearby Arnemuiden. There he became master of the toll-house, and served frequently on the town council, mostly as burgomaster, from 1628 until his death. He is recorded as a member of the Middelburg painters’ guild from 1639 until 1665.

He must have been well known, for in 1666 he went to Antwerp to paint a large allegory as a gift for the painters’ Guild of St Luke. The figures were by Theodor Boeijermans (1620–78). There is discussion about the role of other painters in Van Delen’s work. According to Vermet, the figures in his early works are mostly by himself, while in later works other artists are incidentally involved. Four other painters signed pictures jointly with Van Delen: Boeijermans, Anthonie Palamedesz. (1602–73), Jan Olis (c. 1610–76), and Dirck Hals (1591–1656). But co-signing was not generally common in 16th- and 17th-century Netherlandish art, so the absence of signatures is not indicative of the number of artists responsible for a painting.1

Van Delen’s earliest works derive from the prints of Hans Vredeman de Vries (1525/6–1609) and Paul Vredeman de Vries (1567–1616/17), with imaginary Renaissance architecture. He also painted church interiors. Unlike his imaginary Renaissance architecture, these are strongly Gothic, and sometimes similar to the views of churches by his contemporary Bartholomeus van Bassen. There are many other architectural sources in his later works.

The 1630s were the high point of Van Delen’s career. He depicted exuberant palace exteriors with enormous courtyards populated by elegant figures. His palette lightened, and he included much imaginary sculpture, reflecting the Flemish Late Baroque style of architecture.2 Later his architecture became more modern, based on prints; his figures à la mode are based on those in prints by other painters, including Abraham Bosse (1602/4–76), Marcantonio Raimondi (c. 1480–1527/34), Giovanni Jacopo Caraglio (c. 1500–1570) and Annibale Carracci (1560–1609).3

TECHNICAL NOTES
Single-member oak (or poplar) panel. The dark grey ground is visible around the edges of the painting because the upper paint layers do not extend to the edges of the panel. The panel has a very slight ‘S’-shaped warp. There are some drying cracks, particularly in the dark paint of the foreground pillars. The paint of the costumes is slightly abraded. Previous recorded treatment: 1952–3, cleaned and restored, Dr Hell; 1994, cleaned and restored, S. Plender.

The painting entered the collection without an attribution. Later it was called ‘Claude’, without any reason. Denning in 1858 was the first to give the correct name of the artist, apparently after the picture had been unframed. The architectural elements are those of Flemish Late Baroque. Blade suggested David Teniers II (1610–90) as the painter of the figures, but there are no grounds for that.

The painting is an architectural fantasy. A portico with columns and an arch frames the side view of the portico of a palace decorated with an elaborate carved cartouche and pediment, an entablature of swags of fruit, and urns. In the foreground a couple move towards the right, while in the courtyard two dogs race, and three figures appear on the steps and terrace of the palace. In the distance is another building, and a blue sky with white clouds. While composed on a rigidly correct perspectival scale – most apparent in the chequerboard floor – the picture lacks the detail, colour, and lighting effects of Van Delen’s earlier works (such as Related work, no. 1) [1].

DPG470 seems to appear first in a 1795 sale of pictures said to be ‘late’ the property of Desenfans. It does not appear in Desenfans’ subsequent inventories. It then figures in the posthumous 1813 inventory of Bourgeois’ collection, with no artist’s name. What happened to it between 1795 and 1813 is unclear. It could well have been bought in at the sale of 1795, and stayed in the collection of Desenfans and later Bourgeois. 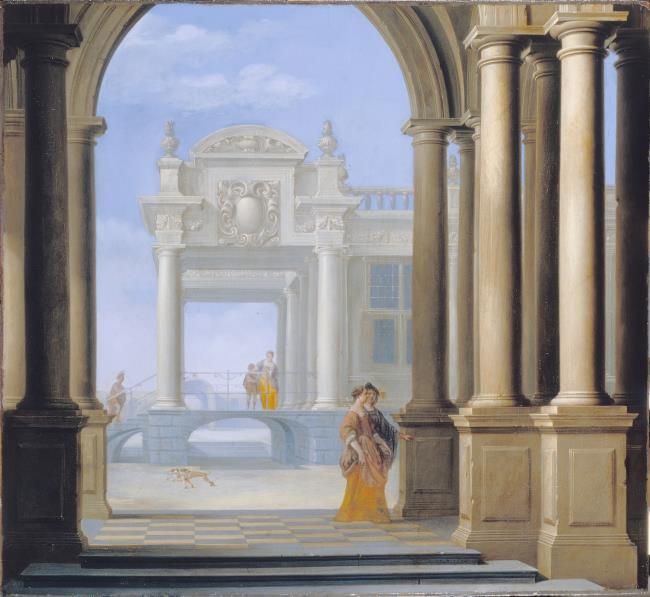 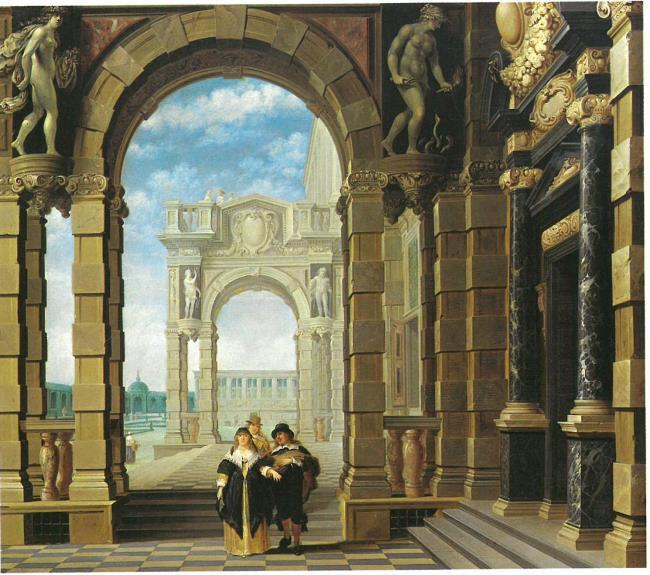 2 e.g. Our Lady of Leliendaal and Our Lady of Hanswijk in Mechelen and the Beguinage Church in Brussels; Vlieghe 1998a, pp. 271–9.

4 ‘–? […] An architectural composition; attributed here to Claude, without a shadow of reason.’

5 ‘{Dirk/{Thierry/{Theodore van Delen; This picture was always ascribed to Claude, but on taking it out of the frame [added: (which is too small for it)] a few years ago, the name was exposed to view. It is dated 1654. His pictures are rare, particularly in England. Mr Hope however has a beautiful picture of the Interior of a Church.’

6 ‘This might be more truly described as a tinted perspective drawing than a picture.’