Aert or Aernout van der Neer spent his youth in Arkel near the riverbank town of Gorinchem (Gorkum), east of Dordrecht, and became at first an amateur painter, probably as a result of his contact with Rafael Govertsz. (1597/8–1657) and Joachim Govertsz. Camphuysen (1601/2–59), who were his brothers-in-law. Aelbert Cuyp (1620–91) sometimes painted the staffage figures in his landscapes.

His earliest known work is a genre scene now in Prague, dated 1632. In the following year he appears to have begun to paint landscapes, stylistically influenced by the Camphuysen brothers and the Flemish school of Frankenthal.1 Around that time he moved to Amsterdam. By the mid-1640s he had rejected the influence of the tonal school of Dutch landscape painting (Jan van Goyen (1596–1656)) and established his own style: he began to specialize in winter scenes, towns on fire, sunrises and sunsets, and especially moonlit views of rivers. In 1659 and 1662 he was documented as keeping a tavern, and on 12 December 1662 he was declared bankrupt. He continued to paint, however; and two of his sons, Eglon (1635/6–1703) and Jan van der Neer (1636/7–65), were his pupils. Eglon became famous as a fijnschilder (literally an artist who paints finely, a term used especially for Leiden artists).

TECHNICAL NOTES
Plain-weave linen. Red ground. Glue-paste lined; the original tacking margins are absent. The side edges are battened and filled with gesso (approximately 0.6 cm wide). Blisters at the edges. Some brittle cupping in the bottom left, and the stretcher marks are showing. There is abrasion down to the ground, particularly in the sky. Many small retouched losses. Previous recorded treatment: 1936, old wormholes in the stretcher filled; 1952–5, Dr Hell.

The Dulwich picture is an almost exact copy of a painting in the collection of George Leveson-Gower, 2d Marquess of Stafford, 1st Duke of Sutherland (1758–1833). A print was made after that painting in 1814 by I. F. Danthemare or Dauthemare (fl. 1803–48), after an intermediary drawing by William Marshall Craig (c. 1765–c. 1834; Related works, nos 1 and 2) [1]. The print was published in an illustrated overview of the Stafford Gallery by William Young Ottley (1771–1836) in 1818.12 It depicts a river scene by moonlight, seen from a high vantage point. The composition is typical of Van der Neer, and reflects his use of the principles of Dutch landscape painting: figures walking along paths, fishermen busy with their nets, skies filled with clouds, and a restricted palette. In the middle is a fishing boat with a braided basket in which fish were kept alive.13 The moonlight is emphasized on many of the trees and figures.

Aert van der Neer’s works were highly prized in England in the 18th and 19th centuries, and many copies were produced for that market. His nocturnes were particularly in demand, and many versions and copies were made of the composition of which the Dulwich picture is itself a reproduction (Related works, nos 3 and 4). 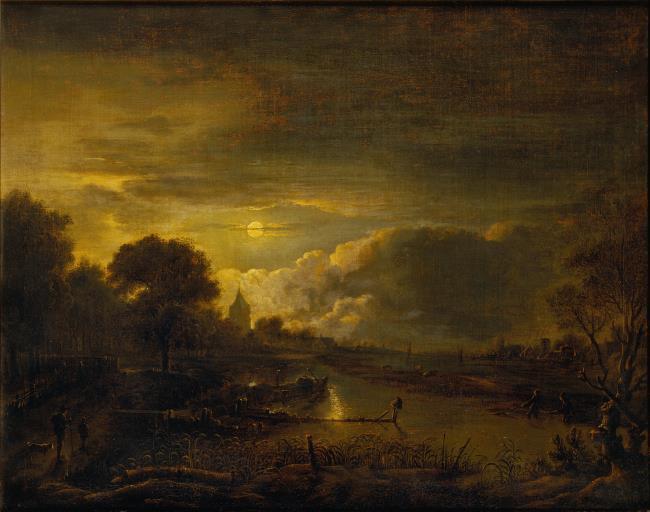 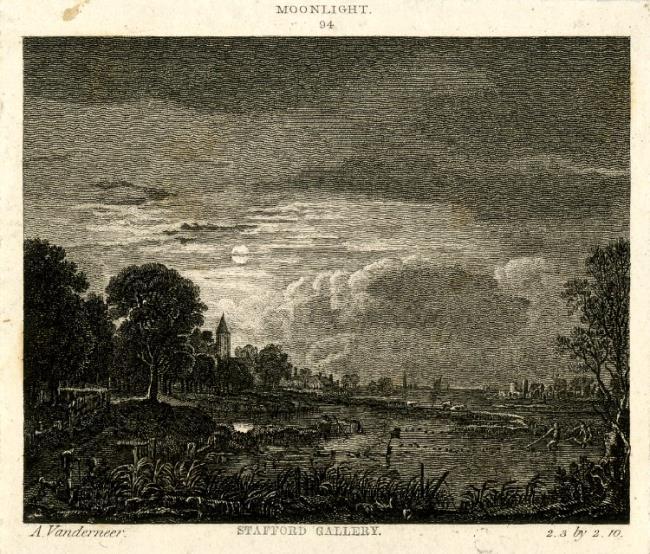 2 ‘Arnold Van der Neer. Scene by Moonlight on a river; the reflection of the moon on the water is finely displayed.’

3 ‘As for that “Moonlight” (No. 112), by Vanderneer, it looks as if it were painted in treacle, and not well painted either.’

4 ‘This is not equal to Van der Neer’s best style. (It would be dangerous to assert positively that he ever touched it.)’ The brackets round the last sentence are in pencil.

5 ‘This artist has painted some two hundred river scenes by moonlight without repeating himself.’

6 ‘fairly representative of the painter’.

7 ‘There is a similar picture to this at Stafford House.’ See the following note.

8 ‘The original of this picture was in the Duke of Sutherland’s collection at Stafford House.’