Amsterdam, baptised 16 Feb. 1612 in the Lutheran Church–The Hague, between 1688 and 1690
Dutch painter chiefly of portraits and some still lifes

Pieter Nason was second cousin of Karel du Jardin (1626–78). He probably trained in Amsterdam with the portrait painter Nicolaes Eliasz. Pickenoy (1588–1650/56), but in 1639 he is recorded as entering the painters’ guild in The Hague. He painted many portraits of military men and people of high rank visiting the city. He was a founder member in 1656 of Confrerie Pictura, the painters’ confraternity in The Hague. He seems to have visited England several times (c. 1651, 1663, and c. 1680), and in 1666 he went to Cleves to make portraits of Friedrich Wilhelm, Elector of Brandenburg (1620–88) and his family, commissions he got via Johan Maurits of Nassau-Siegen (1604–79). That nobleman had been governor of Brazil, and had built the Mauritshuis in The Hague. At that time he was stadholder for the Elector in Cleves. Nason seems not to have produced paintings after 1675. He was still alive in 1688, but recorded as dead in 1690.

TECHNICAL NOTES
Fine plain-weave linen canvas. The ground is light buff. The purple curtain is comprised of red and yellow earth pigments, mixed with black and lead white and is underpainted in grey. Glue-paste lined; the original tacking margins have been cut. Strips at the top and bottom are filled and retouched. The ground is brittle and cupped in areas and the top and bottom edges have cracked and blistered in the past. The crimson lake pigment in the curtain has evidently faded: the curtain has a much deeper, purplish-red tone below the frame rebate. The paint seems to be slightly bloomed where the red lake has faded. There is slight wear in the hair and proper right shoulder. Previous recorded treatment: no record of early conservation treatments; 1990, flaking paint secured, S. Plender; 2005, relined, R. Watkiss; cleaned and retouched, S. Plender; technical report L. Sheldon.

This fine portrait shows a man with long golden hair and a moustache, fashionably dressed in black, with a white linen collar with two tassels which is decorated with what seems to be white Dutch bobbin lace, as are the two pleated cuffs.6 He leans one hand on a book; the other casually points to a skull resting on a table – a vanitas motif. In the background is a heavy brown velvet curtain and a marble column. In 1998 Richard Beresford suggested that Nason had been in England in 1663, because of a portrait by him said to be of the 1st Earl of Shaftesbury, and proposed that the Dulwich picture might have been painted there rather than in the Netherlands. In a review of Beresford’s catalogue a year later, however, Alistair Laing commented that that portrait does not portray the Earl. As Beresford himself noted, the costume suggests that the sitter is Dutch; and it is notable that the male sitter in another portrait by Nason, also dated 1663, wears a very similar collar and tassels (Related works, no. 1) [1]. A portrait of a female sitter, again dated 1663, in the Walters Art Museum, Baltimore, has been suggested as a pendant to DPG556 (Related works, no. 2) [2]. The museum asserts that they are a pair, but if that were the case the colour of the curtains would most probably be the same (the man has a brown curtain behind him and the woman a red curtain); there would be a landscape in both pictures, not just in the female portrait; and, most importantly, the sitters and the columns would not differ in scale. There are similarities in the pattern of the lace of their collars and in the mirror arrangement of the curtains and tassels, but we doubt that they are a pair.7

The picture provides a good indication of the state of portraiture in The Hague just after the mid-century. The primary influence is that of Anthony van Dyck (1599–1641), visible not only in the languid hand pointing at the skull but also in the gaze of the subject at the viewer. Nason’s primary interest, however, is in the careful delineation of detail and the rendering of texture. 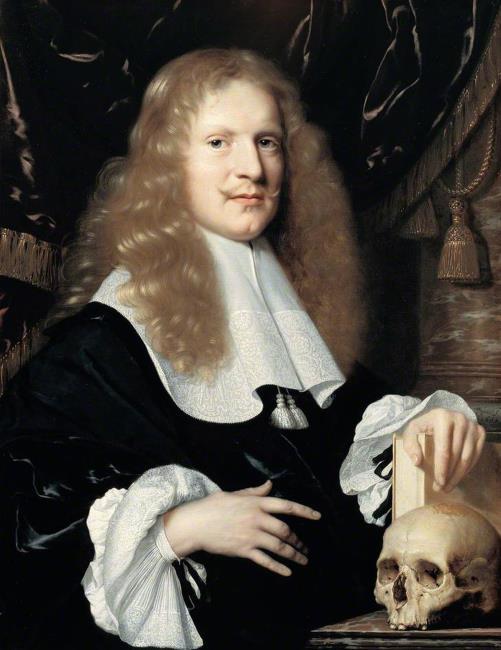 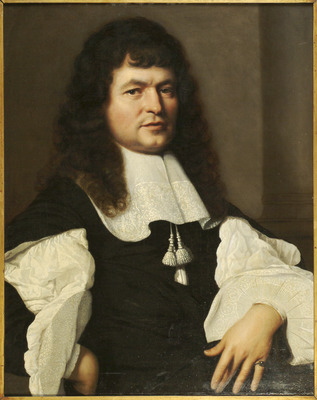 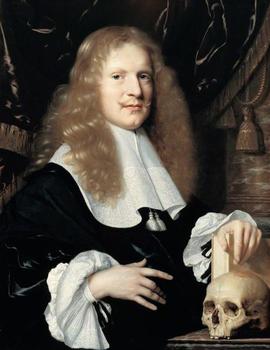 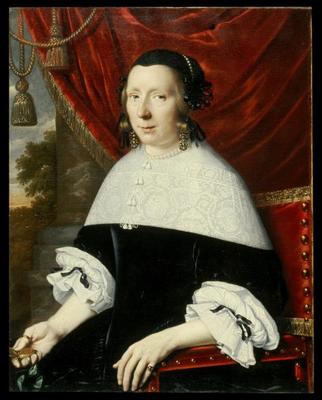 1 ‘Portrait of a Gentleman (probably a Doctor of Medicine or Philosophy) by Pierre Nason, of Amsterdam, signed and dated 1663.’

2 ‘Portrait of a Doctor of Medicine’.

3 ‘Usually called a portrait of a doctor, but there is nothing to support this view.’

6 As analysed by Mieke Alberts of the Rijksmuseum Amsterdam; email from Bianca du Mortier to Ellinoor Bergvelt, 30 May 2017 (DPG556 file).

7 Rudi Ekkart agreed: email from Rudi Ekkart to Ellinoor Bergvelt, 4 Nov. 2013 (DPG556 file). He thought the difference in colours and scale were the most important arguments against them being a pair.