Pieter Nijs is largely forgotten, although Houbraken devoted two pages to his life. In 1636 he is recorded as becoming a pupil of a painter named Hendrick Mertens, doubtless Hendrick Martensz. Sorgh (c. 1609/11–70). He travelled widely: he made trips to Rotterdam in 1637, 1641, 1652 and 1666, visited Louvain in 1650, and between 1651 and 1653 he was variously in Cologne, Frankfurt and Nuremberg. He is said to have been in England in 1666 and to have lost his drawings in the Great Fire of London. He may also have acted as an art dealer: in 1669 he bought thirteen paintings by various masters from the painter Jacobus Houstraet (c. 1630–in or after 1671). Only a few of his works have survived.

TECHNICAL NOTES
Plain-weave linen canvas. Glue-paste lined. The original pine stretcher (which bears what appears to be a genuine signature and date: ‘P. Nys Fecit 1652’) has been retained separately and was replaced with a new stretcher. There is an old 1.5 cm addition along the bottom edge of the canvas; analysis showed this to be a later addition: during conservation it was discovered that the overpaint in this corner, which included a shoe that was not part of the original composition, covered a hobby horse that was original. The overpaint was removed and the hobby horse detail restored. There is very light abrasion over much of the surface, and slightly more obvious wear in the woman’s face. Previous recorded treatment: 1952–5, semi-cleaned and retouched, Dr Hell; 2000, relined, National Gallery, P. Ackroyd; 2000, paint consolidated, overpaint removed, retouched, I. Horovitz; technical analysis, L. Sheldon.

After having been attributed to Nicolaes Maes (1634–93), Willem Kalf (1619–93) and David Teniers II (1610–90), at the end of the 19th century Woman Spinning became merely ‘Dutch School, 17th century’. Recent cleaning brought to light an inscription on the reverse that identifies the artist as the rare Amsterdam painter Pieter Nijs and gives the date 1652.

The painting shows a mother spinning in front of her hearth in a very untidy kitchen, while a small child at her feet hands up a piece of paper. It is a finely painted genre scene, and the removal of an addition, a discarded shoe, in the left-hand corner has brought to light the head of a hobby horse. That object was widely considered to be a symbol of folly, and perhaps alludes to the messy kitchen; on the other hand, it may merely be a child’s toy. Interpreting symbolism in such scenes can be difficult, since things can have contradictory meanings: spinning can be seen both as a symbol of industry and as a sign of the ‘wiles of women’.8 Nijs painted other lower-class interiors (Related works, nos 1 [1] and 3), and also a rustic scene outside a small cottage (Related works, no. 2).

Nijs’s picture is similar in many ways to the genre scenes of his presumed master, Hendrick Martensz. Sorgh, and to those of his contemporaries Willem Kalf9 and Thomas Wijck (c. 1616/21–1677; Related works, no. 4) [2], where the spinning woman and child are in an interior just as untidy. Ultimately, all these artists owe a great deal to the genre paintings of David Teniers II. 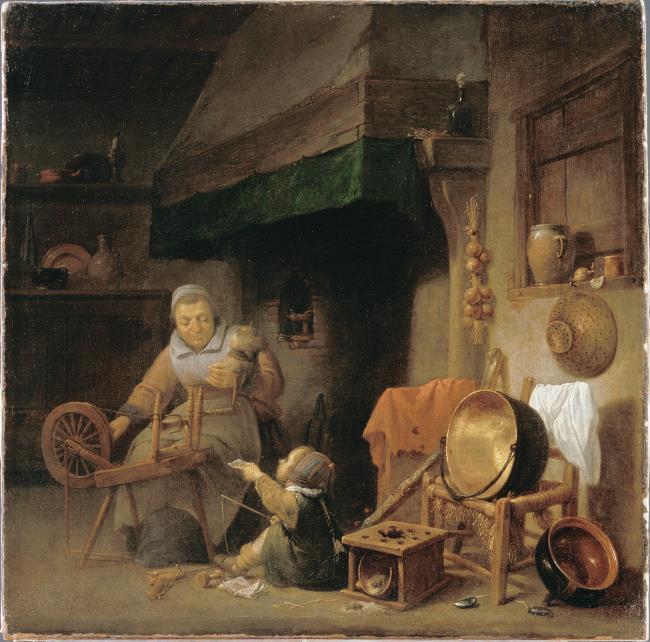 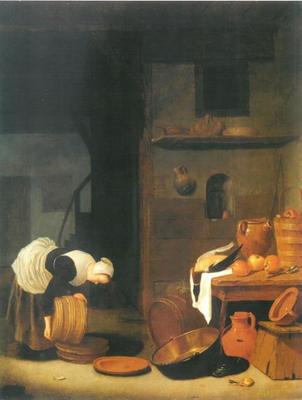 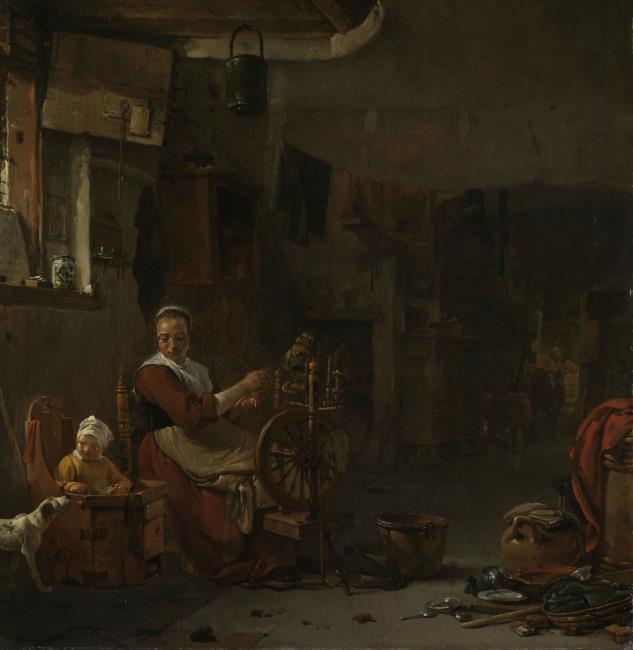 1 While a scene like the one in Woman Spinning might be attributed to Nicolaes Maes, the baby here is definitely not in a cradle, but sits on the floor. Was the picture overpainted in Desenfans’ time?

4 1858: ‘This is an excellent specimen of Kalf’s great ability in painting Dutch interiors, and one not wanting the brass pot, which he knew how to paint so well.’

9 For peasant interiors by Kalf see Giltaij, Van den Brink & Meijer 2006, pp. 36–69, 160–62. However in Kalf’s interiors the still lifes are the most important feature, and the figures are subordinated to them. In Woman Spinning the still life, with a very similar brass cauldron, gets no more emphasis than the interaction of mother and child.