Cornelis Dusart's father was the organist of St Bavo in Haarlem. A pupil of Adriaen van Ostade(1610–1685), he joined the Haarlem Guild of St Luke on 10 January 1680 and was appointed warden of the guild for a year in 1692.

On Ostade’s death in 1685 Dusart took over his studio and continued to produce pictures that followed his master’s models, introducing a lighter palette and brighter colours. He also completed some of Ostade’s unfinished pictures, as well as works by his master’s brother, Isaak van Ostade (1621–49). In the early 1680s Dusart became influenced by Jan Steen (1625/6–79), and while he maintained Ostade’s compositions, his figures began to exhibit Steen’s characteristic expressions, postures and costumes. He may also have completed or adapted some of Steen’s paintings. Some of his numerous prints and drawings also reveal the influence of Cornelis Bega (1631–64).

Dusart never married, and was apparently sickly. His will includes an inventory of his picture collection which reveals paintings and drawings by Ostade and all his etchings together with the plates, and works by other Dutch artists, including Cornelis Bega, Gerrit Berckheyde (1638–98), Frans Hals I (1582/83–1666) and Adriaen van de Velde (1636–72), and Italian artists. His estate was sold in Haarlem on 21 August 1708. His library comprised more than two hundred books, remarkable in itself, but also remarkable for the fact that a list survives, showing that he possessed not only the books on art and art literature that a 17th-century Dutch artist might well have, but also many theological works. 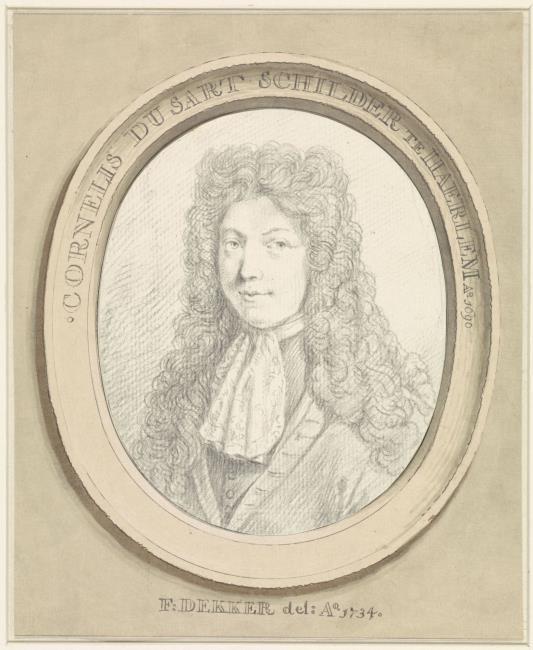 DPG39 – Figures in the Courtyard of an Old Building

Cornelis Dusart’s paintings, prints and drawings are generally raucous affairs, but this has a calm domesticity reminiscent of a secular nativity scene, a reading underlined by the inclusion of the donkey. Murray, who was unaware of the signature and date, suggested that the picture was a late work when the influence of Adriaen van Ostade had waned, but in fact it was painted only two years after Dusart had been admitted to the Guild of St Luke, when he was twenty-two years old. The quiet scene and the use of the dark foreground and the arch as framing devices are particularly reminiscent of some aspects of the œuvre of Cornelis Bega (Related works, no. 3a) [6]. Murray suggested the influence of Rembrandt.14 Indeed there is a picture of a Rest on the Flight into Egypt formerly attributed to Rembrandt (Related works, no. 1a) [2] which bears a general resemblance to Rembrandt’s print of a Holy Family (Related works, no. 1b) [3], and which could have been seen by Dusart. Otherwise, Rembrandt’s example could have reached Dusart via the work of his master. Ostade depicted a scene like this in a painting in Budapest and in an etching, both of 1647 (Related works, nos. 2a, 2b) [4-5]. However Dusart changed the quiet interiors of Rembrandt and Ostade and the noisy inn interiors of Bega (Related works, nos. 3b, 3c) to a quiet scene outdoors, in a courtyard, which indeed looks a bit like a Rest on the Flight into Egypt (also because of the donkey), as Nowak suggested. 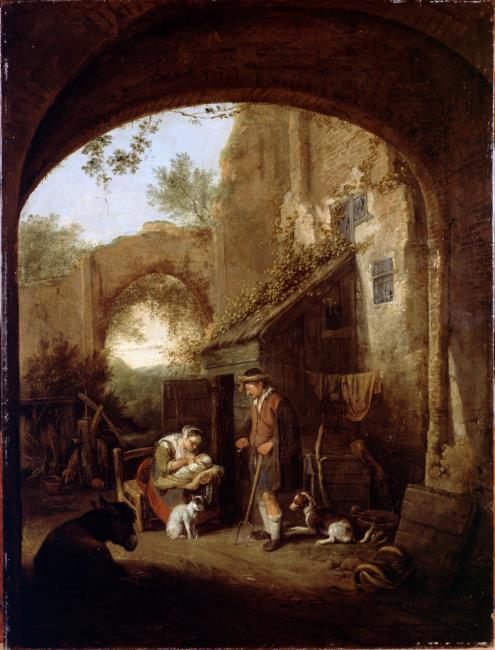 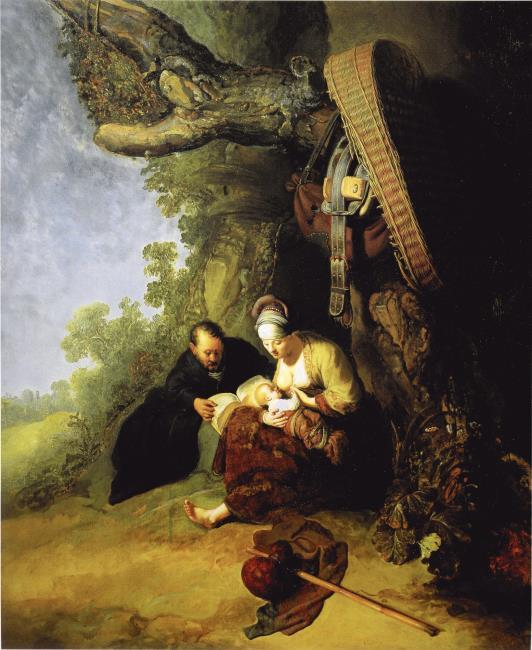 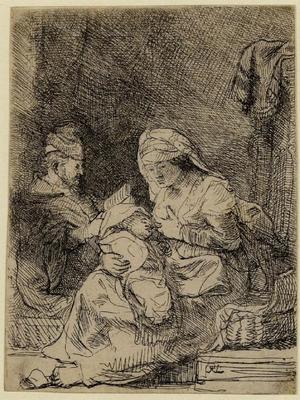 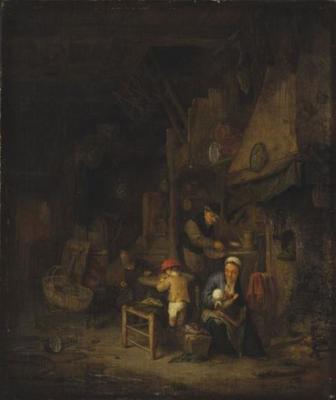 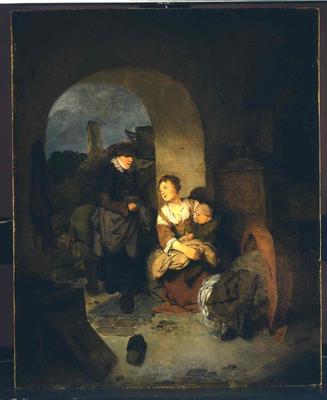 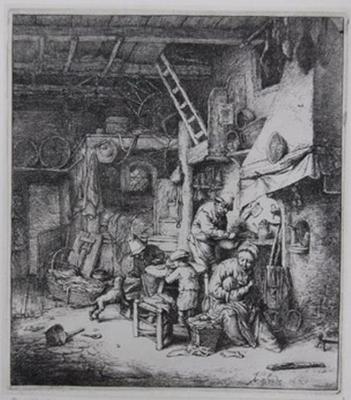 2 ‘Cornelius Dusart. Old Buildings, with an Arch. A Woman suckling her Child, other Figures, &c.’

3 ‘Figures in front of an Old Rustic Building. A woman suckling her child, a man standing by. Dusart was a scholar of A. Van Ostade, whom he has very successfully imitated in this picture.’

4 ‘A remarkably careful and choice picture of this scholar of A. van Ostade, who approaches nearest to his master in the glow of his colouring. (No. 104).’

5 ‘A graceful treatment of an ordinary subject; is much assisted by the warm subdued tone of colour.’

6 ‘One of the artist’s best works, harmonious in colouring, clever in composition, and in conception quite original and independent of Adriaen van Ostade.’