TECHNICAL NOTES
Medium plain-weave linen canvas. Glue-paste lined; the original tacking margins are absent. The bottom right corner of the original canvas is delaminating from the lining canvas. Overall the paint layers are in good condition, with only a few retouchings some of which have discoloured. Previous recorded treatment: 1872, ‘revived’, varnished and frame regilded; 1952–3, Dr Hell; 1991, parts raised craquelure secured, N. Ryder.

This would seem to be a typical work by Du Bois, painted under the influence of the grey skies and dark brooding woods of Jacob van Ruisdael. The placing of the small hill in the foreground is typical, but without an established chronology for the artist it is difficult to date the work. It might have been painted during or shortly after his time in Germany in 1652–3, but it could equally well have been produced from sketches many years later. Richter and Sparkes in 1880 attributed the painting to Du Bois, an indication of the quality of their connoisseurship at a time when little was known about him and reproductions were scarce. In 1996 Jeroen Giltaij of the Museum Boijmans Van Beuningen said it was certainly by Guillam Du Bois, and mentioned the trip to Germany with Van der Vinne and Helmbreker.7

The picture entered the Dulwich collection from Bourgeois as a ‘Hobbima’ (in 1880 Richter and Sparkes stated erroneously that it had been labelled ‘Unknown’ when left to the Gallery). A false ‘Hobbema’ signature was noticed c. 1874 (since removed). Why Britton should mistake the castle for a convent is unclear, unless he knew some unrecorded anecdote. DPG118 may be the ‘View on the Rhine’ attributed to Hobbema that was on the London art market in 1807: it is certainly the only picture with such a description and by that artist sold before Bourgeois’ death that the GPID could offer. 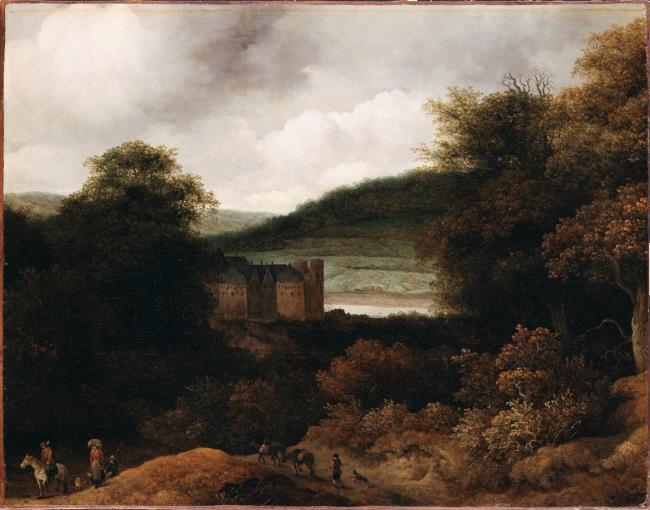 2 According to Van Thiel-Stroman 2006b, p. 112, it was not the painter who was buried on this date (as was sometimes said); she does not know when he was buried.

5 ‘The effect darkened and deteriorated either by time or maltreatment.’

6 ‘The scene is simply an old château, embosomed among wooded hills. There is far less detail and less finish in this picture than in the example, by the master which we have already noticed [no. 131 = DPG87]; but in effect it is grand beyond expression. The grey, gloomy sky (a triumph of pure colour and delicate execution) throws a dreary atmosphere over the whole prospect. The solitude around the old château, and the cold, still, shadows on trees and spreading hills are full of wild poetry; eloquent in their appeals to the imagination. This picture should be hung lower down the wall. It is a treasure worthy of the very best place that could be accorded to it in the gallery.’

8 ‘In simplicity and choice of subject his [= Du Bois’] landscapes come nearer to the conception of Hobbema than of Ruysdael.