More has recently been published about Chaerles (Charles or Carel Cornelisz.) de Hooch.1 He is often mentioned as the father of the celebrated Pieter de Hooch (1629–79), but that is incorrect. According to Gestman Geradts he was the son of Cornelis de Hooghe (1541–83), said to be a bastard son of the Emperor Charles V (1500–1558).2 Cornelis was beheaded in The Hague for leading a failed plot in favour of his supposed half-brother, King Philip II of Spain (1527–98). His children could claim the title of Count of Holland, as grandchildren of the Emperor who was also Count of Holland. The Court of Holland did everything to prevent Cornelis’s children from marrying and begetting heirs.3 In any case, if his father Cornelis was indeed the bastard son of Charles V, De Hooch was related to the high European nobility. From 1624 to 1627 he may have been in Italy; it is suggested that he stayed with the Farnese family.4 He is recorded as a painter in Haarlem and Utrecht in 1628, and in 1633 he became a member of the Utrecht painters’ guild. It is possible that he was the master of Jan Both (1615/22–52). In 1635 he made his will, and he died three years later. His works consist of Italianate landscapes with Roman ruins, and reflect a familiarity with the styles of Bartholomeus Breenbergh (1598–1657) and Cornelis van Poelenburch (1594/5–1667). De Hooch has dated only a few paintings, such as the picture in the Rijksmuseum [1]. In the 18th and 19th centuries many of his works seem to have been attributed to Breenbergh (as DPG23 and DPG26 were).5 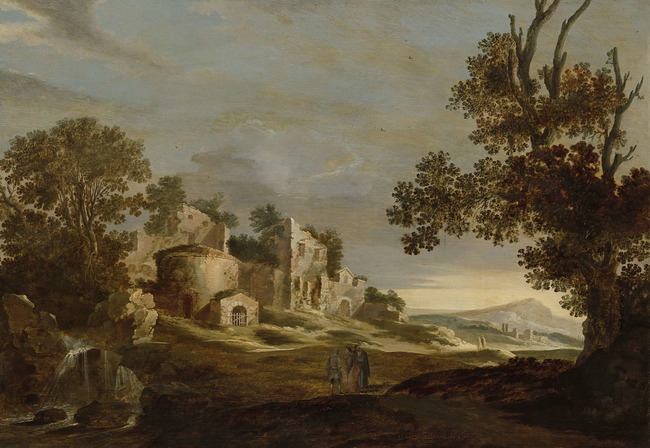 TECHNICAL NOTES
Single-member oak panel with horizontal wood grain, chamfered on the reverse. The grain is clearly visible through the paint layers and there is some minor tenting along the grain in the bottom left. The sky has some drying cracks and there is a diagonal scratch through the figure in the bottom right corner. Some retouchings appear slightly matt. There is a pentimento of a figure under the dog towards the bottom right. The bluish colour of the greens in the landscape and foliage indicates that their blanching and fading is due to the discolouration of a fugitive yellow pigment. Restored by Dr Hell 1952–3. 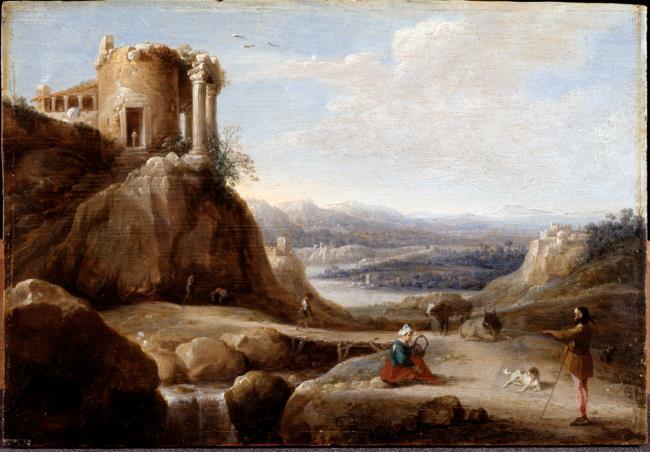 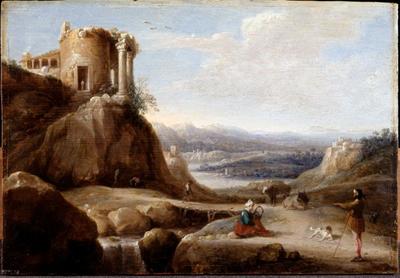 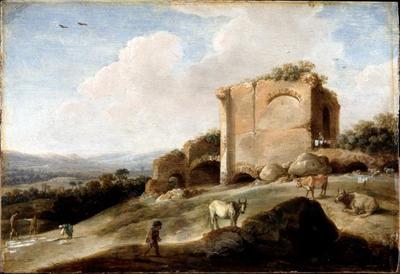 DPG26 – Landscape with a Roman Ruin

TECHNICAL NOTES
Single-member oak panel with horizontal grain. There is an indistinct broken seal on the reverse. Pale ground. The wood grain is fairly evident through the paint layers; this is worse where the paint has been abraded, such as in the sky, which has been in-painted. There is an old scratch in the centre of the sky, towards the top, and the clouds bear a fine craquelure. There are two painted-out figures on either side of the boy in the foreground. UV light shows that this change is a historic intervention made after the artist completed the painting. Cleaned and restored by Dr Hell, 1952–3.

A Ruined Temple (DPG23) and Landscape with a Roman Ruin (DPG26) form a pair. Throughout their documented lives they were attributed to Breenbergh. When looking at the very faint and indistinct inscriptions on the two it would be easy to misread an ‘H’ for a ‘B’, and in 1981 Marcel Roethlisberger suggested they might be by De Hooch, comparing them to a signed picture by Charles de Hooch that was on the art market in 1977 (Related works, no. 1) [2]. This attribution was confirmed by Marijke de Kinkelder of the RKD.19

DPG23 shows a ruined circular temple on a hill above a rocky valley, seemingly an elaboration of the famous Temple of Vesta at Tivoli, a subject repeated in innumerable landscapes. DPG26 shows a sloping landscape topped by a ruined building, which may be based on the central part of the Ponte Nomentano in Rome. Roethlisberger considered that the ruin derived from a drawing by Breenbergh dated 1626 (Related works, no. 4) [3], which indeed is generally similar in composition, with the dark foreground and the ruin on the right; there are however many differences in the detail of the ruin between that drawing and the Dulwich picture, such as the stairs in the drawing, absent from the painting. Part of the ruin in DPG26 could equally well be inspired by the Basilica of Maxentius or Constantine, for instance, as there are several arches below and next to the main building. De Hooch seems to have been strongly influenced by Breenbergh throughout his career, and this could be an example of his copying one of Breenbergh’s motifs. It is presumed that De Hooch visited Italy; copying images by Breenbergh may have been an attempt to assimilate the style of the first generation of Dutch Italianates. It is also quite possible that De Hooch was inspired by prints or drawings of Italian ruins by other Dutch artists, which he freely combined.

The two pictures are first documented in 1813, when they appear as by Breenbergh in Britton’s inventory of the Bourgeois collection. It is very likely that they are one of the numerous pairs of ruin landscapes attributed to Breenbergh that appear in late 18th- and early 19th-century sale catalogues. A seal on the reverse of the Landscape with a Roman Ruin is, unfortunately, badly damaged and illegible. 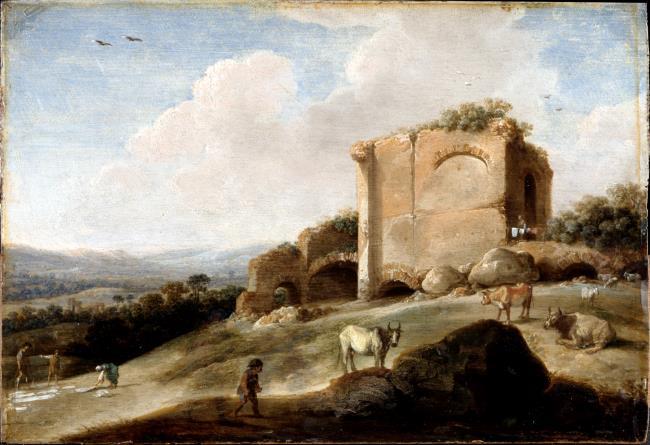 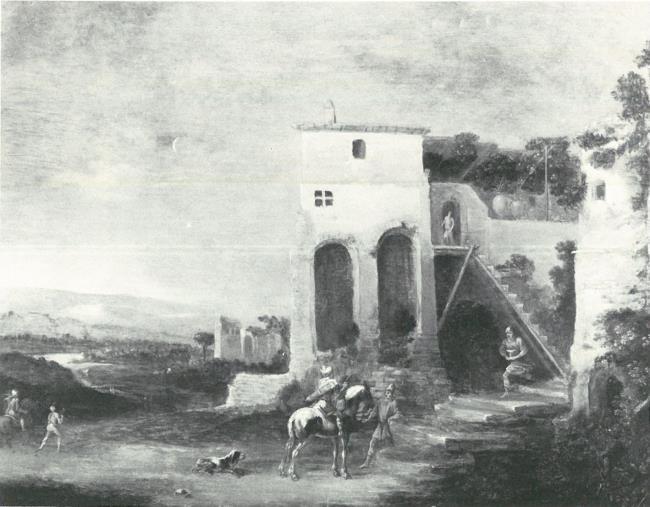 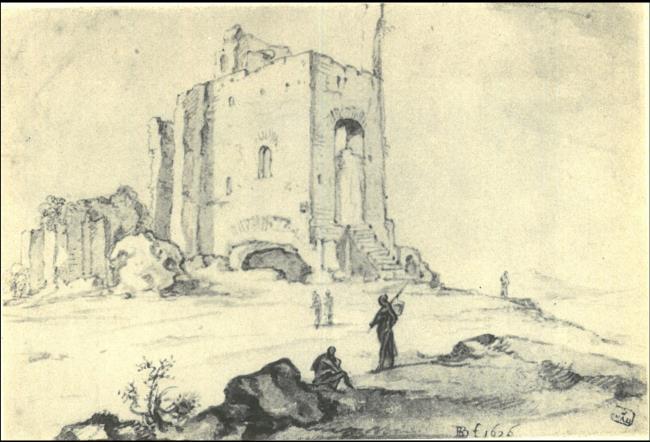 1 In Sept. 2019 his first name was changed from Charles Cornelisz. to Chaerles because he usually signed this way (the policy of the RKD website). The year of his birth was also recently published and changed accordingly on the RKD website. Instead of 1607 it is now c. 1577; see Gestman Geradts 2017. This much earlier birth year means that Chaerles de Hooch would not have travelled to Italy until he was about fifty years old, and would have started painting only shortly before that. Most Northern artists who travel to Italy go there much earlier in their career, typically in their twenties. Chaerles could of course have started late.

5 A pair on copper said to be by Breenbergh may have been De Hooch pictures. See GPID (15 April 2015), Desenfans sale, Skinner and Dyke, 28 Feb. 1795 (Lugt 5281): ‘Breembergh; A pair of small neat Landscapes, with Ruins and Buildings, on copper’; transaction unknown. GPID gives five other Breenbergh landscapes that were offered for sale by Desenfans.

6 ‘Breenberg. Landscape, with a Temple on a Hill’.

8 ‘A fine specimen of the artist’s skill, and very attractive in the variety of its scenery, which recalls the Upper Tiber Valley near Rome.’

9 ‘The temple in 23 is based on that of the Sibyl at Tivoli, while 26 may be based on the central part of the Ponte Nomentana in Rome. Both are examples of the imaginary Italianate landscapes influenced by Poelenburgh.’

13 ‘Simple in its motive; somewhat monotonous in colour’.

19 Letter from Marijke de Kinkelder to Richard Beresford, 17 Nov. 1997 (DPG23 file): ‘I agree with the attribution of the above mentioned pair to Carel de Hooch. Of course the influence of Breenbergh is obvious but some details point clearly to De Hooch, for example the architecture on the left and the figure as in DPG23. The date 1633 on DPG26 is consistent with his artistic development and the picture is to my mind clearly dating from his Utrecht period (from 1628 on he was active there).’