Hoet primarily specialized in small-scale Arcadian landscapes in the style of Poelenburch, but he also produced works on religious, mythological and Classical themes, as well as portraits, genre scenes, and illustrations for Bibles. While these were mainly small-scale, he also painted ceiling and wall decorations, for instance at Slangenburg Castle at Doetinchem, where one room was dedicated to the story of Dido and Aeneas (1680–1700) [2].1 His son, Gerard II (1698–1760), was a painter and dealer, one of the first to recognize the importance of collecting and publishing sale catalogues.2 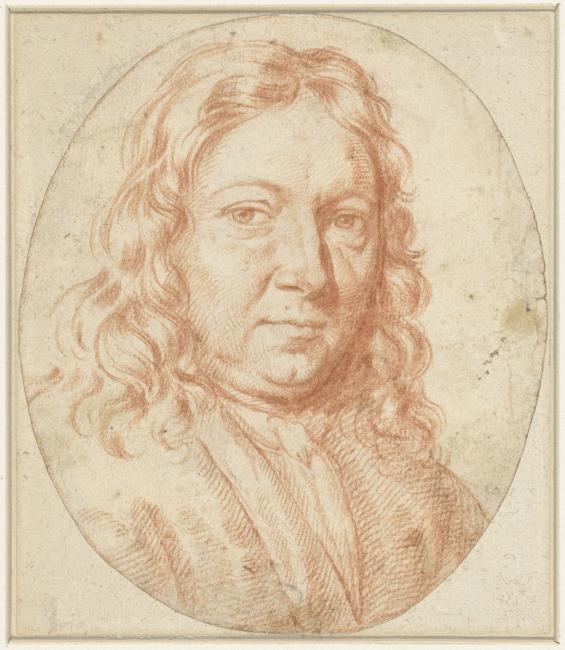 TECHNICAL NOTES
The painting is in good condition. Increased transparency in the paint in the sky has revealed pentimenti at the tops of the trees on the left where the artist has painted over foliage with sky paint. The original tacking edges are present and fully visible on the front surface, as the stretcher is larger than the original picture. There is some raised craquelure centre left, which is now secure. There is abrasion and slight blanching of the paint. Damage to the top left corner has blanched retouching. Some greens in the landscape have discoloured and become brown. This painting is more discoloured than its pair. Previous recorded treatment: mid-20th century, ?cleaned and retouched by Dr Hell; 2006, secured raised paint, S. Plender; 2015, relined, cleaned and restored, S. Plender. 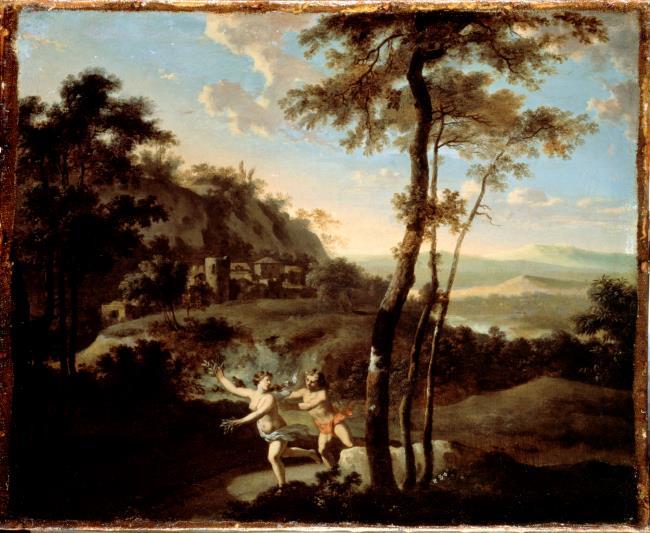 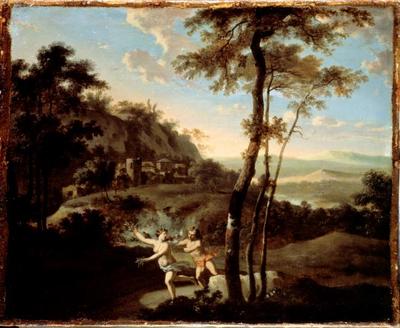 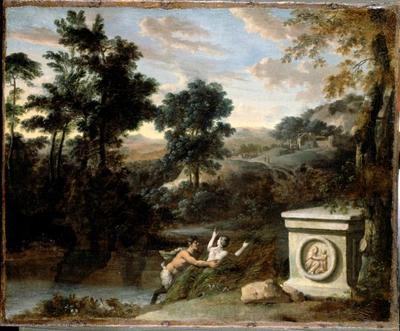 TECHNICAL NOTES
The painting is in good condition. The paint surface has a noticeable craquelure. Increased transparency in the paint in the sky has revealed pentimenti at the top of trees where the artist painted over foliage with sky paint. The original tacking edges are present and fully visible on the front surface, as the stretcher is larger than the original picture. Some greens in the landscape have discoloured and become brown. The reflections of trees in the pond at the left have lost some subtlety in the tonal balance, due to increased transparency and pigment degradation, and to abrasion. Some of the dark shapes in this area might be pentimenti. There is a large pentimento above the lake. This painting is less discoloured than its pair. Previous recorded treatment: mid-20th century, ?cleaned and retouched by Dr Hell; 2006, secured raised paint, S. Plender; 2015, relined, cleaned and restored, S. Plender.

RELATED WORK
1) Gerard Hoet I, Venus shows Aeneas and Achates a Flight of Swans, canvas, 290 x 250 cm, part of the decoration of the Dido Room in Slangenburg Castle, Doetichem [2].8

Until the pictures were cleaned in the 1940s the signatures were invisible and they were attributed to Gerard de Lairesse (1641–1711).9 The first of Gerard Hoet’s two pictures on Classical themes at Dulwich shows the nymph Daphne fleeing Apollo and calling on her father, the river god Peneus, saying she would rather be turned into a laurel tree than submit (Metamorphoses I, 452–567). In John Dryden’s late 17th-century translation:

Scarce had she finish’d, when her feet she found
Benumb’d with cold, and fasten’d to the ground:
A filmy rind about her body grows;
Her hair to leaves, her arms extend to boughs:
The nymph is all into a lawrel gone;
The smoothness of her skin remains alone.

The second portrays Pan pursuing the nymph Syrinx, who is being transformed into a reed (Metamorphoses I, 689–712):

Now while the lustful God, with speedy pace,
Just thought to strain her in a strict embrace,
He fill’d his arms with reeds, new rising on the place.

In both cases the theme is rejected love, including a wild pursuit, and in the end both are exempla of the victory of Chastity.

The two pictures are late examples of the Dutch Italianate landscape tradition. Mai suggested that they were painted around the time of Hoet’s great decorative programme for Slangenburg Castle (Related works, no.1) [2] and consequently dated them ‘before 1700 (?)’.10

The landscapes are completely idealized constructs, consisting of several layers of rising terrain to give the feeling of depth. While they underline the Arcadian and Classical nature of the scenes – a theme emphasized by the Roman tomb seen to the right in Pan and Syrinx – the trees dividing the composition of Apollo and Daphne into two are a nod to the compositions of Jan Both (1615/22–52) and the late pictures of Aelbert Cuyp (1620–91; e.g. DPG124, A Road near a River). The dominant influence however is that of the French Classical painters, most notably Claude Lorrain (1604/5–82), Nicolas Poussin (1594–1665), and Gaspard Dughet (1615–75).

Because they were long identified as being by Gerard de Lairesse, the pictures were in Robert Browning’s mind when in 1877 he composed his verses on Lairesse in his Parleyings with Certain People of Importance in their Day:11

… the pageantry
Which passed and passed before his busy brain
And, captured on his canvas, showed our sky
Traversed by flying shapes …
… shapes
Of god and goddess in their gay escapes
From the severe serene; or haply paced
The antique ways, god-counselled, nymph-embraced. … 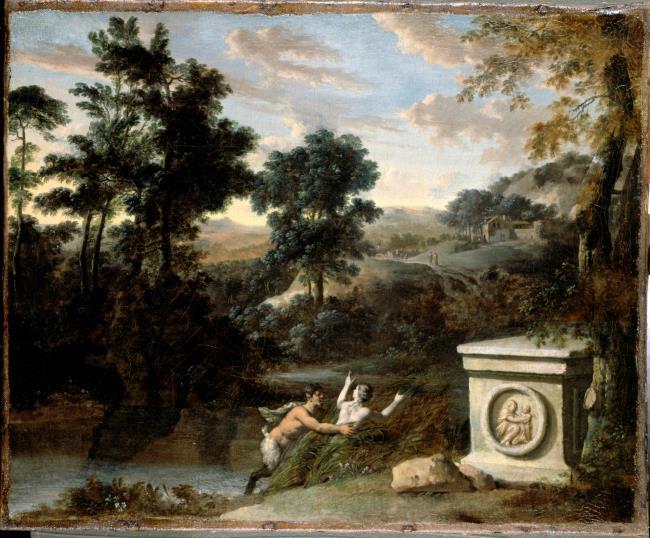 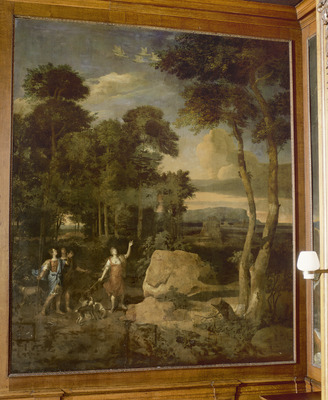 3 ‘Ditto [= Gerhard Lairesse]. Apollo and Daphne. In a landscape, replete with beauties’.

4 ‘This picture [Pan and Syrinx] and its companion, Apollo and Daphne (42), appear to me to have all the worst faults of Poelemberg without his delicacy.’

5 ‘But he wants classical sentiment and Italian refinement’.

7 ‘Some have called him “the Belgian Poussin”; but Mrs Jameson more correctly says these pictures betray “the worst faults of Poelemberg without his delicacy.”’