Gerard (or Gerrit) van Honthorst is the most famous member of the group of Utrecht artists who fell under the sway of Caravaggio (1571–1610). He came from a family of painters, and both his grandfather and his father were textile and tapestry designers who were active in the Utrecht artists’ guilds. As a youth he trained in the studio of Abraham Bloemaert (1566–1651), and possibly as early as 1610 he left Utrecht for Italy,1 where he enjoyed great success, acquiring such important patrons as Vincenzo Giustiniani (1564–1637), Scipione Borghese (1576–1633) and Cosimo II de’ Medici, Grand Duke of Tuscany (1590–1621). Settled in Rome, he fell under the influence of Caravaggio, but exchanged the Italian artist’s natural lighting for artificial illumination, acquiring the Italian nickname ‘Gherardo delle Notti’.

Returning to Utrecht in 1620, he married and established himself as an independent artist, running a large studio of journeymen artists and pupils. In 1622 he became one of the founders of the Utrecht painters’ guild, of which he served as dean in 1625–6 and 1628–9. During these years his style began to move away from artificial lighting towards brighter colours and illusionistic perspective. In the early 1620s he began to attract powerful clients in the North, such as the house of Orange Nassau in the Netherlands and George Villiers, First Duke of Buckingham (1592–1628) in England. In 1628 Honthorst was called to England, possibly on the recommendation of Peter Paul Rubens (1577–1640), and there he painted Charles I of England (1600–1649) and his queen Henrietta Maria de Bourbon (1609–69). On 28 November of that year he was made an English citizen and awarded a lifetime pension of £100 per annum.

On his return from England Honthorst continued to receive Charles I’s patronage, but now produced portraits under the influence of Anthony van Dyck (1599–1641). From 1629 to at least 1643 he painted works for Kronborg Castle for Christian IV of Denmark and Norway (1577–1648). During those years he also received important commissions from the house of Orange Nassau, which led him to move from Utrecht to The Hague in 1637. He collaborated on the decoration of the Oranjezaal, the main room of Huis ten Bosch – commissioned by Amalia van Solms-Braunfels (1602–75) to commemorate her husband, Stadholder Frederik Hendrik, Prince of Orange (1584–1647), after his death in 1647 – with several other Northern and Southern Netherlandish painters.2 Honthorst painted the cupola and several allegorical portraits.

In 1640 Honthorst was elected dean of the painters’ guild of The Hague, but in 1652 he moved back to Utrecht. Given the paucity of works after that year, it would seem that he had retired. In his career he was extremely successful, and he appears to have made a considerable fortune. Among his numerous pupils were Joachim van Sandrart I (1606–88), Gerard van Kuijl (1604–73), and, according to Sandrart, the Dutch Italianate landscape painter Jan Both (1615/22–52). 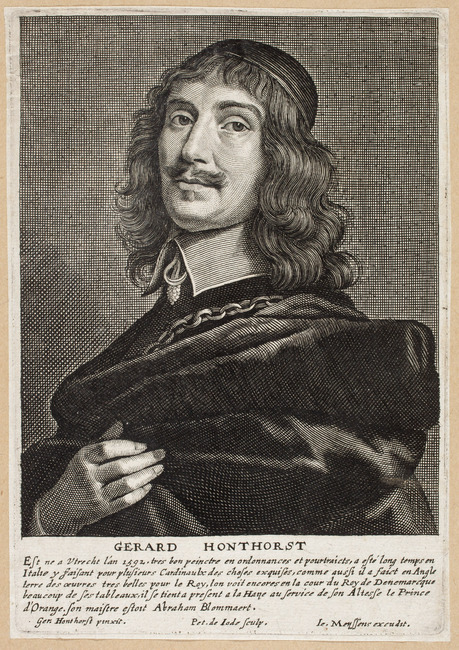 TECHNICAL NOTES
Three-member oak panel with vertical joins. The red ground is very thinly painted, as are the main paint layers, except for the white areas. The panel has a slight convex warp. It is structurally sound, but over the years the joins, which are perfectly level at the centre, have become slightly stepped at the edges. There is slight all-over craquelure which corresponds to the vertical grain of the panel. Some old retouching in the top left of the oval is now noticeably discoloured, and there is an old unretouched loss in the background and other tiny losses which relate to the right-hand panel join. Abrasion to the paint layers allows the ground to show through a little in some areas, for example at the bottom of the painting and in the collar above the sitter’s right shoulder. Previous recorded treatment: 1952–3, cleaned and restored, Dr Hell. 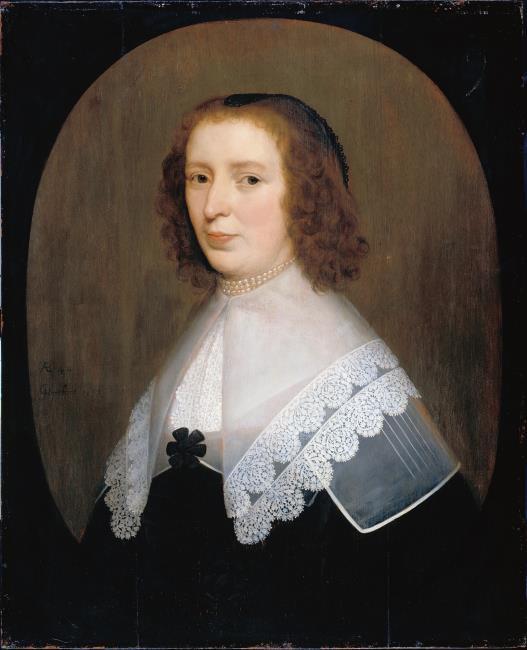 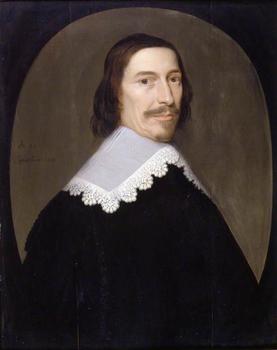 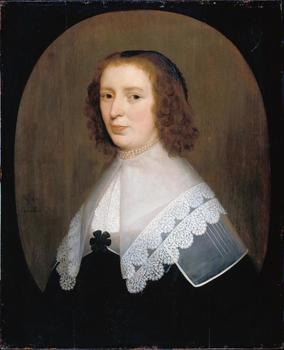 PROVENANCE
De Witt family collection, Dordrecht, 1639–after 1760; Dutch private collection, 1990; acquired through Sotheby’s in 1990 with the aid of grants from the Friends of Dulwich Picture Gallery, the Stanley Scott Fund and the National Art Collections Fund.

TECHNICAL NOTES
Three-member oak panel with vertical grain and joins. The panel has a slight convex warp. The joins – particularly the left-hand one – are beginning to open up slightly at the bottom. The paint is secure, although there are some old losses along the joins and the panel grain. There is a large area of lighter discolouration or ‘bloom’ in the dark costume. Numerous old lightened or discoloured retouchings are observable; these are especially disturbing in the costume. The paint is abraded along all four edges, particularly on the right side. Previous recorded treatment: no record of previous treatments exists for this painting.

The female sitter in DPG571 remained unknown until 1986, when E. J. Wolleswinkel of the Stichting Iconographisch Bureau in The Hague identified her as Anna van den Corput (1599–1645). He noted that the subject was identical to that in a portrait securely identified as Anna van den Corput, by Jan de Baen (1633–1702), in the Dordrecht Museum (Related works, no. 1a) [2]. Part of a group of family portraits, that was painted in 1665, twenty years after the death of the sitter, and is clearly based on DPG571; the artist updated the costume to a contemporary style.

Anna van den Corput was the wife of Jacob de Witt, lawyer, burgomaster of Dordrecht in 1639, 1646 and 1654, and ambassador extraordinary to Sweden and Norway. In 1650 he was briefly imprisoned for his role in the opposition of the States of Holland to the military policies of Stadholder Willem II, Prince of Orange (1626–50). In 1657 he was portrayed by Nicolaes Maes (1634–93; Related works, no. 5), and in 1665 by Jan de Baen (Related works, no. 1b) [3]. His portrait by Honthorst, DPG652, is clearly a pair to DPG571. It is not known at what point the pair left the family collection, but in 1760 Houbraken produced an engraving of Honthorst’s portrait of Jacob de Witt based on a drawing after it by Aert Schouman (1710–92; Related works, no. 3) [6]. The engraving was intended as an illustration for the famous Dutch History of the Fatherland (1749–60) by Jan Wagenaar. An inscription on it records that the original was then in the collection of Cornelis de Witt, burgomaster of Dordrecht. Presumably the portrait of Anna van den Corput was also still in the family collection, like the two portraits of their sons, Cornelis and Grand Pensionary Johan (now in the Dordrecht Museum: Related works, nos 2a, 2b) [4-5]. The four paintings had been framed c. 1669 like state portraits, which indeed they were, since Johan de Witt as Grand Pensionary was the highest director of the entire Republic of the Seven United Netherlands.11 After he and his brother were murdered in 1672 and the Stadholder of the House of Orange returned to power, they became simple family portraits.

By 1639, the date on the portraits, Honthorst was living in The Hague. The sitters are portrayed in fashionable costumes with elaborate lace collars, and set in somewhat archaic oval frames. Their poses and their evident detachment reflect the influence of Van Dyck, although stylistically the portraits lack his brio, exhibiting a harder, drier style. 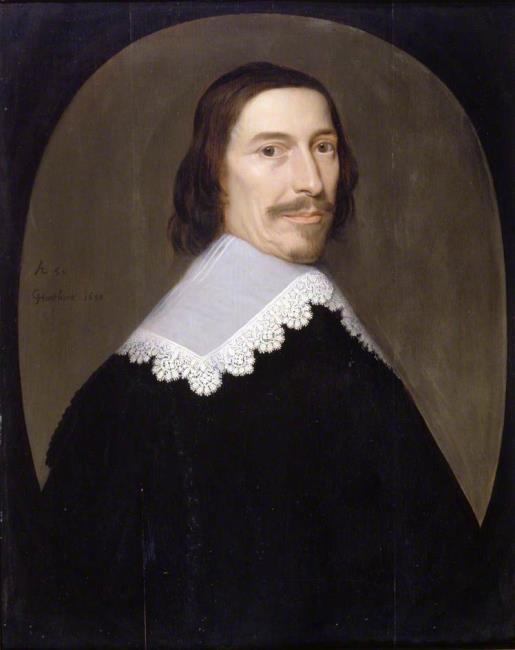 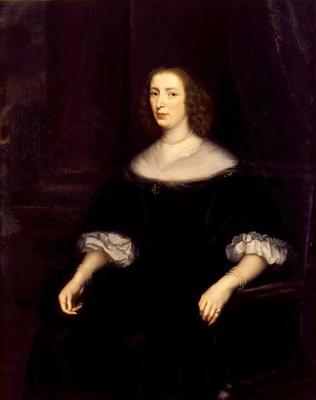 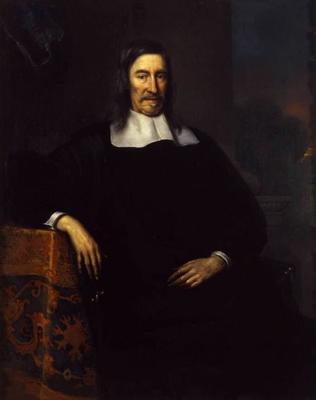 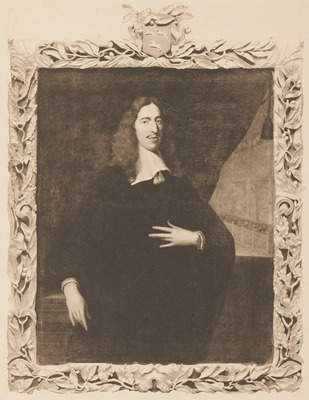 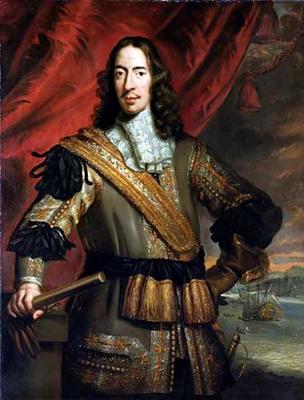 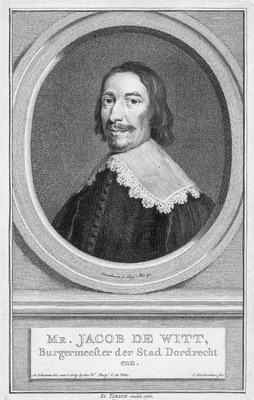 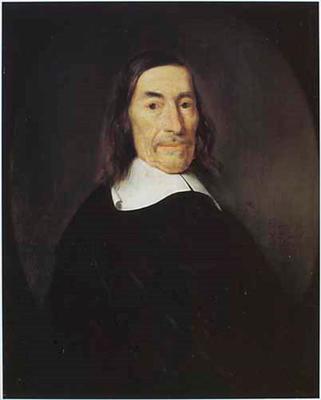 4 ‘An admirable work in the painter’s later and better manner, showing refinement and an agreeable sense of colour […] It comes from the Mniszech collection in Paris.’