Jan van Huijsum was the last great exponent of Dutch flower painting – even, as Denning said, ‘the last of [the] great Dutch masters’.1 He studied with his father, Justus van Huysum I (1659–1716), who was a flower painter too, and probably an art dealer as well. In 1704 he left the family workshop to set up as an independent master. He is recorded as having had only one student, Margaretha Haverman (1690/1700–in or after 1723), who worked briefly in his studio. He may also have taught his daughter, Francina Margaretha van Huysum (1707–79). Little is known of his apparently uneventful life, and he seems never to have travelled abroad.

His œuvre consists of some dozens of arcadian or classical landscapes and more than two hundred known still lifes, on which his fame is based. These typically show luxuriant flowers in a classicizing vase on a stone plinth or table; often there is a bird’s nest. His early works still have a traditional symmetrical composition, reflecting the influence of painters such as Jan Davidsz. de Heem (1606–84) and Abraham Mignon (1640–79), and the dark background that was then usual. Later, however, Van Huijsum’s compositions assume diagonal, S-shaped forms that are quite Rococo, and he was the first to introduce a light background. His flowers and fruit are intensely realistic-looking, though in real life they often bloomed or ripened at different times of year. Some paintings have several different dates (see under DPG120, Related works, no. 8): he had to wait for the right season.

Van Huijsum counted many of the great and good among his patrons, including Philippe II, duc d’Orléans (1674–1723), Wilhelm VIII von Hessen-Kassel (1682–1760), Friedrich Wilhelm I von Preussen (1688–1740), and many Amsterdam merchants. Sir Robert Walpole (1st Earl of Orford; 1676–1745) commissioned four paintings from him, and Sir Gregory Page (2nd Baronet; c. 1695–1775) six. After his death, too, his work was sought after and was very expensive, as his paintings stayed in excellent condition thanks to his delicate technique. Van Huijsum’s manner powerfully influenced 18th-century flower painting in Europe. 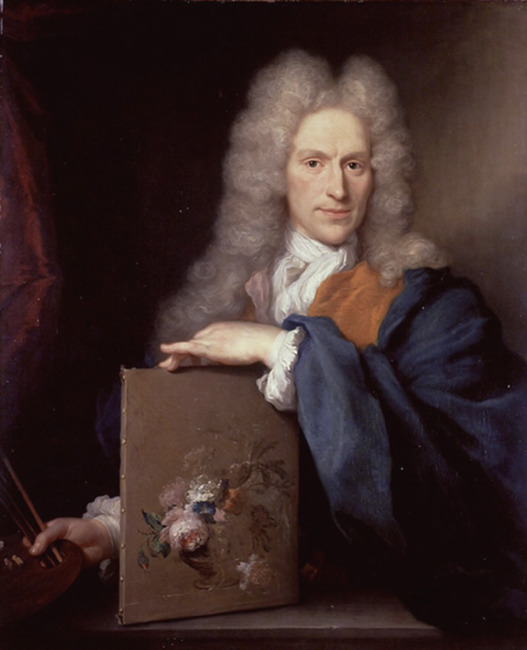 TECHNICAL NOTES
Mahogany panel with vertical grain. Tan-coloured double ground. A sophisticated range of blue and green pigments were used by the artist. The panel has a very slight concave warp and is chamfered along the right and top verso edges. There is a series of small partial splits along the bottom edge. The reverse of the panel has been painted with a granular red-brown layer. There are old (filled) woodworm holes down the front right side of the panel. The paint film is generally in excellent condition. Widespread tiny losses, such as those on the poppy, affect the paint film; it was the occurrence of this micro-abrasion that prompted the recent treatment of the painting. An old (now removed) thick natural resin varnish layer may have contributed to this problem. There are tiny pentimenti in the stalks and flowers; in the background to the left of the iris is a larger pentimento. The greens have discoloured, becoming more blue-looking, almost certainly as a result of the fading of a fugitive yellow pigment. The blue irises appear slightly blanched, and the blacks and some of the foliage are slightly reticulated. Previous recorded treatment: 1867, ‘revived’ and revarnished; 1949–53, Dr Hell; 2004, consolidated, cleaned and retouched, N. Ryder; technical analysis, A. Burnstock.

Painted around 1715, according to Meijer in 2006, this depicts flowers in a vase and a bird’s nest with five eggs beside it, on a marble slab, against a dark background. The flowers consist of tulips, roses, poppies, auriculas, French marigolds, orange blossom, salvias, London pride, forget-me-not, veronica, iris, larkspur, flax, and convolvulus minor [5]. The vase is made of glass or stone, however, and not of terracotta as Meijer asserts (for examples of glass, metal and terracotta vases see Related works, nos 6–8).

Paul Taylor in 1996 noted that the vase is decorated with high-relief putti in the style of François Du Quesnoy (1597–1643); Meijer considered that this was one of the first paintings in which that element appears. The motif was also used by Van Huijsum in a flower piece formerly in Vienna (Related works, no. 3); and also in DPG139.

Smith suggested that the eggs in the nest were those of a chaffinch, but the 1905 Dulwich catalogue asserted that they were chiefly those of a hedge-sparrow, and that one was a cuckoo’s egg. Gaskell in 1984 noted that eggs in still life paintings had been interpreted as signifying the life cycle or the Resurrection, and regarded that as far-fetched, though he found the inclusion of the cuckoo’s egg intriguing, evoking a number of themes such as adultery, ingratitude, and the nativity of Christ;14 he thought that Van Huijsum was chiefly concerned to demonstrate his ability to depict different textures, colours and forms, in effect rewarding viewers for their close attention. Close attention will similarly be rewarded by the many insects that populate the picture – beetle, bee, butterfly, ant, ladybird and fly – as well as by the numerous water droplets. 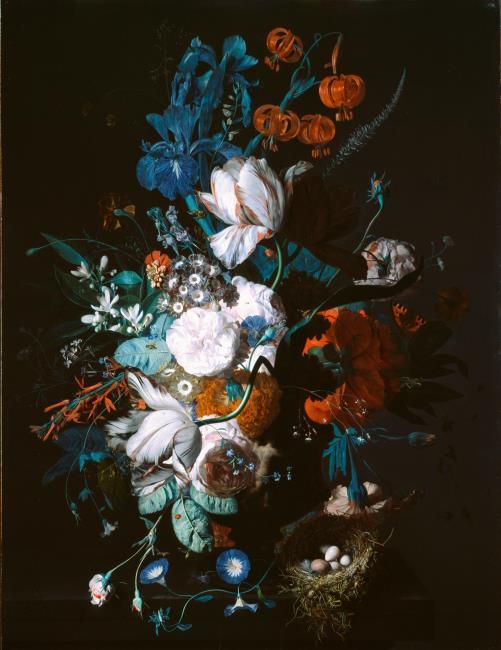 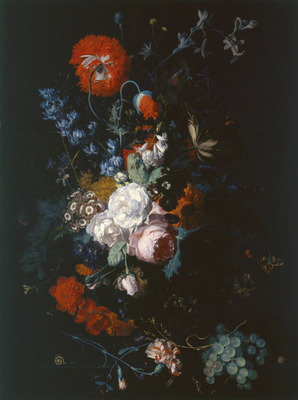 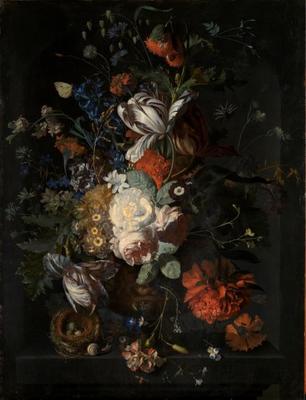 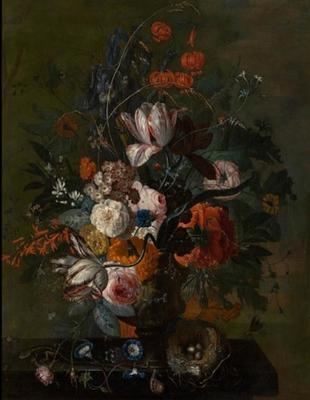 5
Diagram of the flowers and small animals, by Sam Segal

TECHNICAL NOTES
Fine plain-weave linen canvas. Pale grey ground with thinly painted upper layers. The canvas has been lined onto fine cloth; the original tacking margins have been cut. The original canvas is 1 cm short of the top and the bottom of the stretcher. There is a (mended and retouched) hole in the left part of the plinth. The ground shows some signs of lifting from the canvas, possibly as a result of the failure of the size layer. Some mechanical craquelure is noticeable in the light areas of the painting, and there is heavy craquelure in the stalks. The paint film is fairly abraded from previous treatments. This has affected the modelling and made the canvas texture more obvious. Abrasion has also made pentimenti more prominent, such as the change in position of the poppy stalk that is visible through the tulip to the right. The red glazes in the central peony have faded, and possibly in the two pink roses. Previous recorded treatment: 1867, ‘revived’ and revarnished; 1921, relined and probably revarnished; 1949–53, Dr Hell; 1984, surface cleaned and retouched, National Maritime Museum, S. Sanderson.

DPG139 has many elements characteristic of Van Huijsum, such as the arrangement of the flowers in an S-curve, the juxtaposition of large and small blossoms, and the dramatic lighting. It was a popular picture, the subject of many postcards. Because of the style, especially the use of the light background, it must have been painted later than DPG120, which has a dark background. In 1979 Segal attributed it to Jacob Xavery (1736–in or after 1774). Later, in a discussion of a Xavery picture in Dublin (Related works, no. 2), he drew attention to the fact that several Xavery signatures had been changed to Van Huijsum, including that on DPG139.27 Meijer repeated the attribution to Xavery in 2006, but commented that it would seem to be of somewhat better quality and of a cooler tonality than Xavery’s known, and often uneven, œuvre (Related works, no. 1) [6].28 However the condition of the painting needs to be taken into account before any decision can be made concerning attribution. Much has been lost in the upper layers, and the picture is rather dirty, with scattered remains of varnish, producing a flat and dull effect. Cleaning would give one a chance to evaluate the quality. In our opinion it might even be by Van Huijsum himself. What was probably a preparatory drawing is in Vienna (Related works, no. 3) [7]. It seems more logical that Van Huijsum used the drawing himself for DPG139; it is not known that Jacob Xavery got hold of the contents of Van Huijsum’s studio, or that he ever used another preparatory drawing by Van Huijsum.29

The flowers consist of a large overblown tulip, tuberoses, double stocks, roses, auriculas, and a hollyhock. A bird’s nest lower right contains robin’s eggs. The flowers are in a terracotta vase decorated with wrestling putti in the manner of François Du Quesnoy, similar to those on the vase in DPG120.

Britton in his 1813 inventory for what is now DPG120 described this as the pair, but with their great difference in dates that would probably not have been the intention of Van Huijsum – if he was the painter. 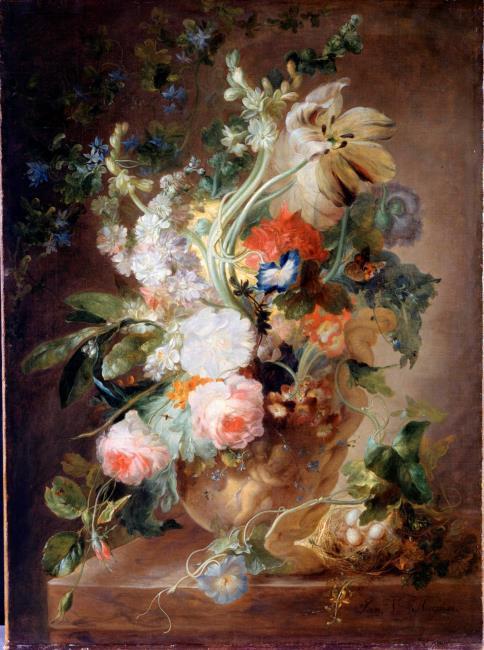 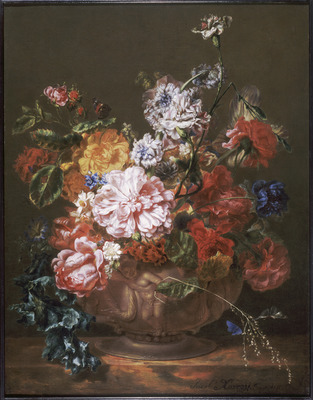 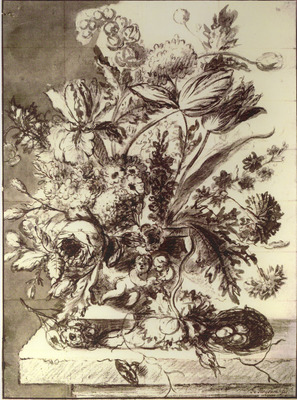 2 Desenfans’ Insurance List of 1804 records a picture by the ‘Old Vanhuysum’ and one by the ‘Young Vanhuysum’. It is most probable that Desenfans thought that DPG120 (with the dark background) was by the ‘Old Vanhuysum’, and DPG139 (with the light background) by the ‘Young Vanhuysum’. It is not likely that the references are to the fruit and flower still lifes which were at the time thought to be by Jan van Huysum and to be a pair (DPG42 and DPG61).

3 ‘J. Vanhuysum. Flowers and a Bird’s Nest. As fine a specimen of flower painting as was ever seen.’

4 ‘Another flower-piece on a dark ground is scattered in the arrangement, and rather damaged […] (No. 121).’

18 ‘J. Vanhuysum. Flowers. A worthy companion to No. 124; although the colour of its back-ground renders it less effective at the first glance.’

19 ‘It will probably be found, on comparing this work with the preceding one [= DPG120], that it possesses more softness, as well as more richness, spirit, and truth of general effect, in proportion as the handling is more free and unlaboured. The work before us resembles one of Rubens’s glowing pieces; while its more finished rival reminds us of the cold unrealities of Mieris or Vanderwerf. There is a motion, a life, almost an odour, in this; while the other seems like a reflection in a mirror.’

20 ‘This is a beautiful specimen of this celebrated flower painter, from the Calonne collection.’

22 ‘a more freely-painted picture than the one mentioned below [= DPG120]; almost sketchy in its treatment.’

23 ‘Uncommonly broad in execution, of a vaporous tone. Mentioned by Waagen.’

29 Xavery seems to have been too young to have been taught by Jan van Huijsum: the latter died when Xavery was only thirteen years old.