TECHNICAL NOTES
Medium plain-weave linen canvas, paste-lined (2004) onto fine linen canvas; there is an original horizontal join across the centre. The original tacking edges are missing, and at some point the left side was turned over and used as a tacking margin (it is now part of the main picture plane once again). It appears that the original canvas was cut down at some stage. There are some relatively minor (filled and retouched) damages to the support, including a chip in the lower left group of trees and a deep scratch in the lower left corner. The ground is red and contains red ochre, calcite and some lead white. The paint layers are generally in good condition and the craquelure, which has cupped and flaked in the past, seems to have been consolidated by the recent conservation. The layer structure of the paint varies from area to area: the sky is composed of two layers containing good quality ultramarine on top of smalt, while the landscape is much more complex, with a layer of brown ‘dead colouring’ over the ground and several further layers on top of this. The foliage in the lower part of the painting seems blanched, possibly due to the processes used in the old, 19th-century lining. Previous recorded treatment: 1994, tacking edges temporarily repaired and re-attached to stretcher, tears in canvas secured, S. Plender; 2004, technical analysis undertaken, L. Sheldon; 2004, old lining removed, relined and restretched, R. Watkiss; 2004, cleaned, losses filled, retouched, S. Plender.

The picture entered the collection under the name ‘Hannsbergen’ – probably Jan van Haensbergen (1642–1705), who lived in Gorinchem, Utrecht and The Hague, and painted portraits and landscapes. His pictures look very much like the mythological and Biblical scenes of Cornelis van Poelenburch (1594/5–1667), and seem to us to bear no relation to DPG651. The convincing attribution to the Antwerp painter Philips Augustijn Immenraet was made by Marijke de Kinkelder of the RKD.6 At first she referred especially to a landscape by Immenraet dated 1678 in which a wolf hunt is depicted (Related works, no. 1) [1]; later she compared DPG651 to one dated 1666, auctioned in London in 1949 (Related works, no. 2). Another comparable picture by Immenraet, signed and dated 1666, is now in Strasbourg (Related works, no. 3) [2].

It seems that the figures in DPG651 are by a different hand, probably close to Johann Jakob Hartmann (before 1658–1736/45), a Bohemian landscape painter who was very much influenced by Antwerp landscapists such as Jan Brueghel I (1568–1625) and by artists of the Frankenthal School. Two of Hartmann’s pictures were acquired by the National Gallery in Prague in 2005 (Related works, nos 4a, 4b). It remains a question how the two artists could have collaborated, while one was working in Antwerp and the other in Bohemia. In any case there were close links between landscapists in Bohemia and in Flanders. Was there an earlier painter of figures who worked in Flanders in the style that Hartmann later would develop in Eastern Europe? During a CODART-meeting on 2 December 2013 in Dulwich Picture Gallery it was suggested that DPG651 was by a Franco-Italian painter, in the circle of Salvator Rosa (who is known to have influenced Immenraet as well). According to us, however, as long as no name of such a painter has come up, or his works, De Kinkelder’s suggestion is more credible.

It is unclear what mythological or allegorical scene is depicted. 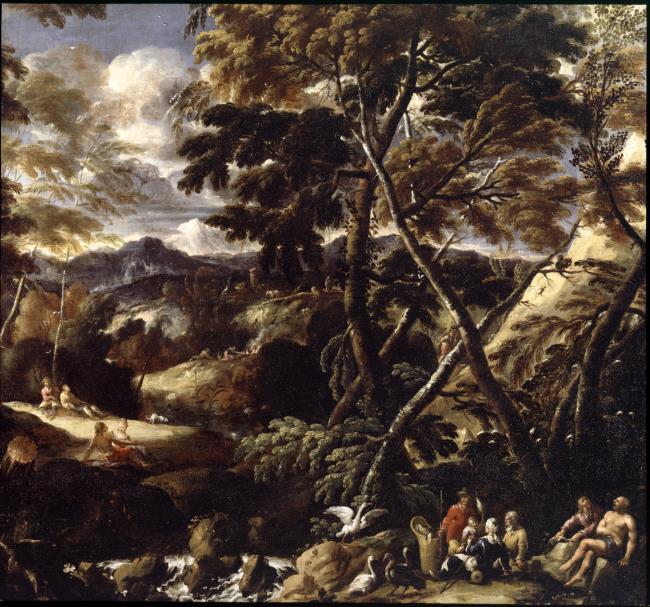 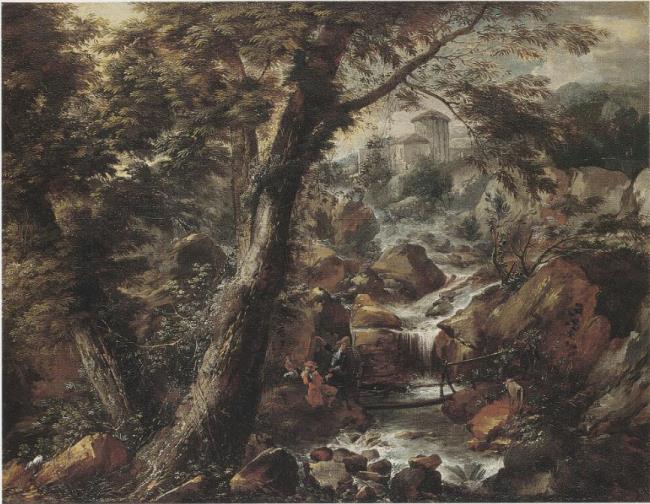 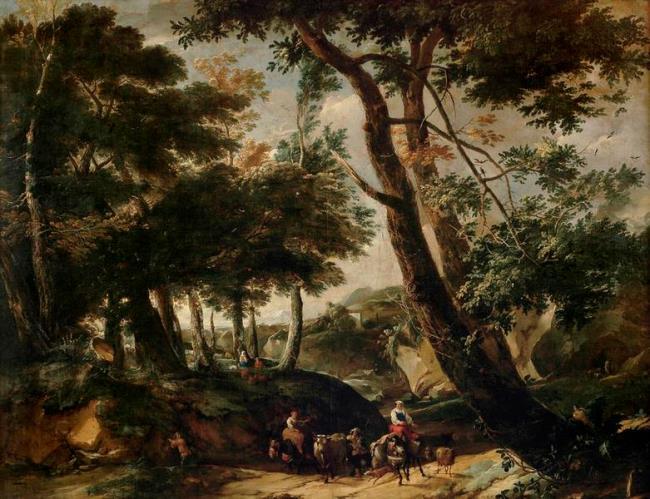 1 ‘a large picture of a “Flemish or Dutch Landscape with Figures,” said to be by Hannsbergen, had been bequeathed to the Gallery. They [Mr Dodd and the Chairman] were both of the opinion that its standard was not high enough to warrant hanging in the Gallery. The Committee, however, after discussion, decided to retain the picture.’