Introduction. The Collection of Dutch and Flemish Pictures at Dulwich Picture Gallery

The 228 Dutch and Flemish pictures dating from the 16th to the 18th centuries (and some British and German ones) that are discussed in this catalogue were primarily brought together by the art dealer Noel Desenfans (1744–1807) and the painter Sir Francis Bourgeois (1753–1811) [1].1 They collected and bequeathed 170 of the 228 pictures in this online RKD Study.

Earlier, 23 pictures were bequeathed by the actor William Cartwright (1606–86), which were added to the picture gallery that was founded as part of the school that would become Dulwich College in South London (see below). Later, two are purchases by the Dulwich Picture Gallery itself in 1990 and 2010, in both cases the pairs to pictures already in the collection.2 Starting in the early 19th century, 27 Dutch and Flemish pictures were given and bequeathed to the Gallery by individuals, most of whom presented one picture. The exceptions were Charles Fairfax Murray (1849–1919), whose gift was primarily devoted to British pictures but who also contributed six Dutch and Flemish portraits between 1911 and 1917,3 Professor C. D. Broad (1887–1971), who gave four pictures in 1946, and Miss Gibbs in 1951 three.4 The provenances of six paintings, four of which were found in Dulwich College in 1890, are unclear.5 One already recorded there in 1814 (DPG505, now Hemessen) may have been part of the first bequest by Edward Alleyn (1566–1626; see below), and one (DPG472, Verwer) has traditionally been considered part of the Bourgeois Bequest in 1811.6

While the provenances of the other paintings are clearer, the identities of some of their makers are much more vague and variable, as painters moved around Europe. First they went to the cities where they could train in the studios of their masters, and some also travelled to Italy to study Antiquity or Italian Renaissance art. Later in their careers they went where they could earn a living, joining their patrons or going wherever there was a market for their manner of pictures. What is the identity of a Flemish or Dutch artist working in London, Rome or Paris? Or one travelling between the Netherlands and London? Or one travelling between the Northern and Southern Netherlands for that matter? Should Anthony van Dyck (1599–1641) be called a Flemish or a British painter?7 Could Antonio Moro or Mor (1516/21–76), who was born and bred in Utrecht, but worked for the royal courts in Lisbon, Madrid, Brussels and London, and died in Antwerp, perhaps better be called a European painter (DPG396, after Mor(o))? For the present we have decided that of the 228 pictures in this catalogue about 135 are by 68 Dutch artists, some 75 by 25 Flemish, 11 by 5 British, 5 by Germans, and 2 by masters working in Prague. More than three pictures were made by or related to the following artists: Nicolaes Berchem (1621/2–83) 6, Jan Both (1615/22–52) 5, Abraham van Calraet (1642–1722) 6, Aelbert Cuyp (1620–91) 8, Anthony van Dyck 5, Adriaen van Ostade (1610–85) 5, Rembrandt (1606/7–69) 4, Peter Paul Rubens (1577–1640) 19, Herman van Swanevelt (c. 1603–55) 3, David Teniers II (1610–90) 21, Jan Wijnants (1632–84) 4, and Philips Wouwerman (1619–68) 12.8 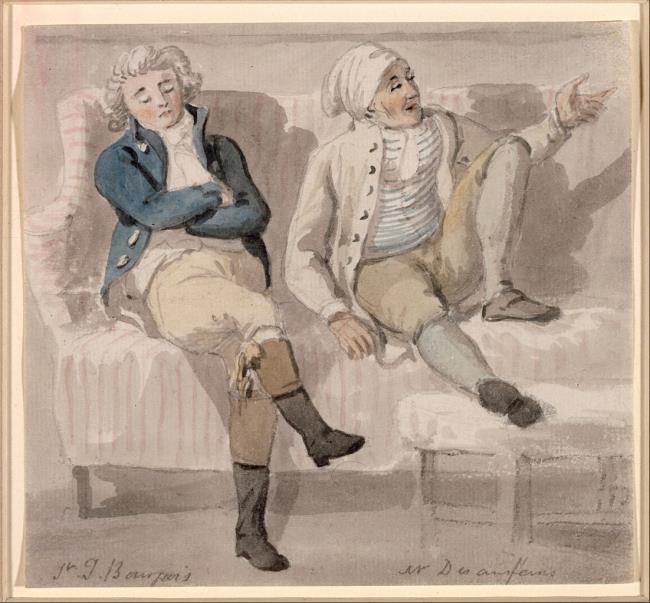 In general one can say that the quality of the Desenfans and Bourgeois pictures is rather high, and many of them worthy of a national gallery. Most did not come directly from the Netherlands, but via French collections that were scattered following the French Revolution in 1789. Many of these found their way to the London art market, which was booming around 1800. Some of the pictures collected by French aristocrats had often been reproduced in prints, including works by Nicolaes Berchem, David Teniers II, Adriaen van der Werff (1659–1722) and Philips Wouwerman. Dulwich Picture Gallery illustrates the preferences in the field of Dutch and Flemish painting that can be found in 18th-century French collections, especially the Italianate landscapes of Berchem, Both, Cuyp, Karel du Jardin (1626–78), Adam Pijnacker (1620/21–1673), Wijnants and Wouwerman. Most of the artists represented at Dulwich can be found in the œuvre catalogues of Dutch and Flemish painters which were published by the London art dealer John Smith (1781–1855) in nine volumes between 1829 and 1842, a selection also more or less reflected in the collections at that time of the Rijksmuseum in Amsterdam and the Mauritshuis in The Hague.9

In this introduction the main benefactors will be discussed and an account will be given of the previous catalogues published by the Gallery, written by both Gallery staff and outside experts.10

With many thanks to Ian Dejardin

3 Charles Fairfax Murray trained as a painter in the Pre-Raphaelite style (see DPG612, King’s Daughters, and D6, a drawing called Andrea del Sarto and his wife, Ingamells 2008, pp. 214, 252), but later became an art dealer: see Ingamells 2008, p. 145 and Elliott 2000. Murray gave 46 pictures to Dulwich College’s governing body, primarily British portraits but including 6 by Dutch and Flemish artists: Pieter Nason (DPG556), Cornelis Jonson van Ceulen I or Cornelis Janson van Ceulen II (DPG564), Gerard van Honthorst (DPG571), Adriaen Hanneman (DPG572) and Gerard Sanders (DPG577), and one now ascribed to Flemish/Dutch School (DPG605). Peter Lely is considered to be a British painter (see Ingamells 2008, pp. 176–7); the pair to DPG563 that was acquired in 2010 (DPG662) is discussed in this catalogue. In 1912 Murray presented a Self-portrait by Jan Lievens to the National Gallery (NG2864).

4 Miss Gibbs left six pictures in 1951: after Adriaen van Ostade (DPG619); after Antoine Watteau (DPG620); Richard Brakenburgh (DPG621); circle of David Teniers II (DPG622); Joseph Vernet after Claude (DPG623); and attributed to Abraham Pether (DPG624). For DPG624 see Ingamells 2008, p. 215, where it is mentioned not as bequest but as gift of Miss Gibbs in 1951. The two French pictures will be included in the third volume of the DPG catalogues about the Southern schools. The Gallery could have been more selective in accepting bequests and gifts, especially in the 20th century, as some of the pictures (often copies) then acquired are justly never shown.

6 DPG472 is not identifiable in Britton’s 1813 inventory, nor is it mentioned in the catalogues before 1876, as most, if not all, of the Bourgeois pictures are. So it could also have been part of the Cartwright Bequest, or left by a member of the College staff in the 19th century.

7 Ingamells 2008 discusses the pictures made by Van Dyck in England in his British catalogue (DPG194, Lady Digby, pp. 104–5; DPG170, George Digby, pp. 106–7; DPG201, Portrait of a Lady, manner of Van Dyck, p. 108). The pictures that Van Dyck painted in Italy were intended to be included in the third volume, about the Southern schools. The rest of the Van Dyck pictures are discussed in the present catalogue, both those made in Flanders (DPG127, DPG73, DPG90, and the original of DPG81) and one picture made in Italy (DPG173).