Cornelis Jonson (Johnson, Janssens) [1] was born in London of Netherlandish parents. His grandfather originally came from Cologne – ‘Ceulen’ in Dutch at the time. He probably trained in Holland; mentioned as possible masters are Jan van Ravesteyn (The Hague; c. 1572–1657) and Michiel van Mierevelt (Delft; 1566–1641).1 After his return to London about 1618 he became one of the leading portrait painters in England before Anthony van Dyck (1599–1641) arrived in 1632. In that same year King Charles I (1600–1649) awarded him the title of ‘His Majesty’s servant in the quality of Picture drawer’. In his paintings he often used blue and green backgrounds, unusual at the time; these have frequently deteriorated and faded. He also painted portrait miniatures on copper. After the outbreak of the Civil War he left for Holland in 1643, and stayed there for the rest of his life. For The Hague magistrates he painted a group portrait in 1647 [2].2

Cornelis Jonson could be considered either a Dutch or an English painter.3 Baker thought that because he always signed ‘Johnson’ or ‘Jonson’ and never ‘Janssens’ he saw himself as English.4 However he changed his signature in the course of time. In Holland he first added ‘Londini(s)’, or Londones (from London), to his signature,5 but later, around 1650, he added ‘van Ceulen’ (from Cologne)6 – perhaps because it was not very sensible at that time to emphasize London in the Netherlands.7 During the final eighteen years of his life in Holland, in whichever city he was living he always attended the English church, which conducted its business in English.8

Cornelis Janson van Ceulen – also referred to as Cornelis Jonson II – worked in his father’s style, and does not have a well defined character. Born in London, he appears to have been active in England from about 1675, but he must have started painting in the Netherlands in the 1650s. He seems to have been fond of the blue-grey background that his father used in his later works. The relationship between the œuvres of the two artists is not clear, and it would seem that the son sometimes signed with his father’s signature, although this may only have begun after the father’s death as a means of promoting the family name, as in the portrait of Aletta Pater (Centraal Museum, Utrecht).9 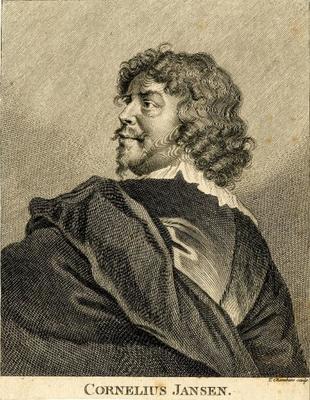 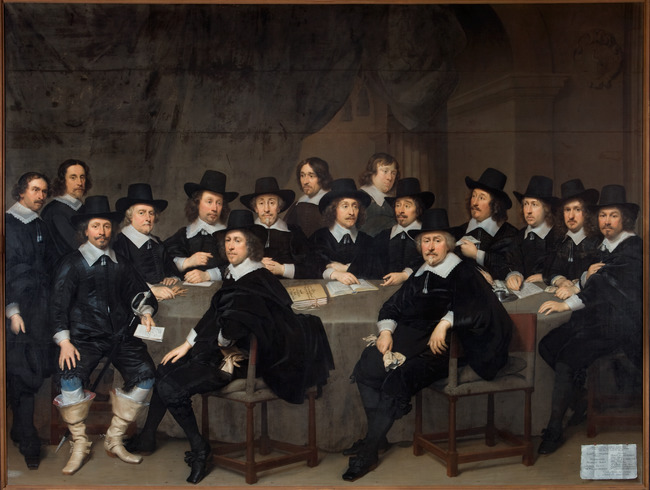 DPG564 – Portrait of a Gentleman in Black

TECHNICAL NOTES
Plain-weave linen canvas. There is a double ground: the bottom layer is a warm red mixture and the upper layer is beige-coloured; these two mixtures contain similar pigments in different proportions including red and yellow ochres, calcite, lead white and charcoal black. The paint has been applied in very thin layers. A brush handle has been used to scratch into the white paint of the lace collar. Glue-paste lined. The original tacking margins are absent. The colour of the background has faded dramatically from blue to the present ash colour; a strip of the original colour has survived beneath the frame rebate. The affected pigment is indigo, an organic pigment susceptible to light damage and discolouration. The paint film has suffered from extensive fine network craquelure, which may well be related to the effects of the glue-paste adhesive in the lining. Previous recorded treatment: 1953, Dr Hell; 1996, technical examination, cleaning and restoring, Courtauld Institute of Art, R. North.

With the date ‘1657’ (earlier read as ‘1637’), DPG564 could be by father or son. However it seems that only the father used the signature as found on it, as was noted by Malcolm Rogers in a letter of 199714 and by Alistair Laing in his review (1999) of the Beresford catalogue. Karen Hearn confirmed the date, highlighting that the sitter was probably Utrecht-based, as Jonson was living in the city from 1652.15 Some dated portraits of the 1650s are very similar. In style and the positioning of the figure, as well as its dimensions, a Portrait of a Lady now at St Gallen might be a pendant to the Dulwich portrait, although it is dated 1652 (Related works, no. 1) [3].16 The Portrait of a Lady with Philip Mould in 2012 is dated 1657 like DPG594, but it is too large (Related works, no. 2).

If DPG594 is the portrait that was in the London auction in 1898, it then had a pair; what happened to that, and what that looked like, is unknown.

In the backgrounds of the Dulwich picture and the two women’s portraits (Related works, nos 1, 2) the blue has discoloured from exposure to light; here the original colour survives under the frame.17 The three pictures seem to have had the same problems in the background as the pair of portraits of Jasper Schade van Westrum and Cornelia Strick van Linschoten by Cornelius Jonson van Ceulen I now in Enschede, dated 1654 (Related works, nos 3a, 3b) [4-5].18 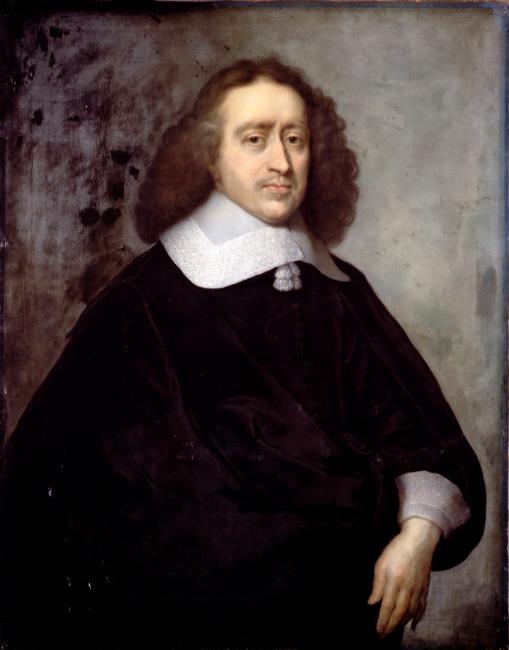 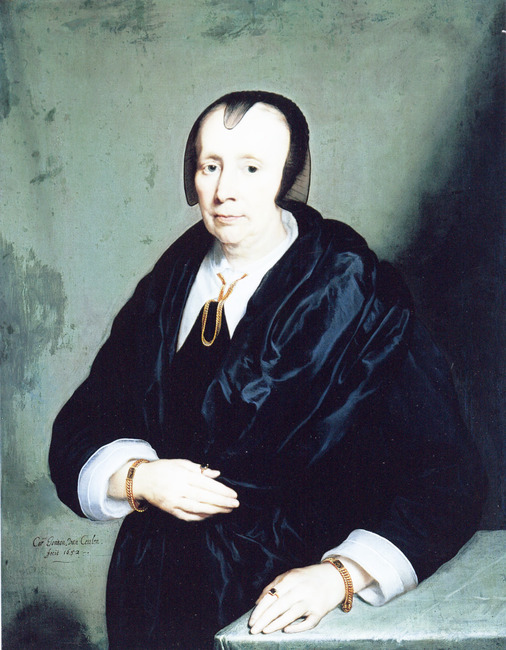 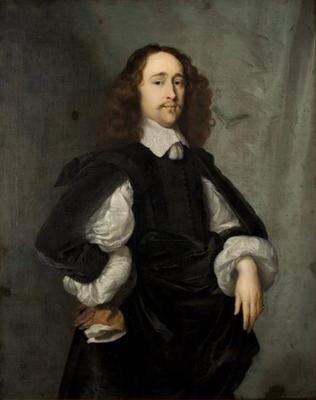 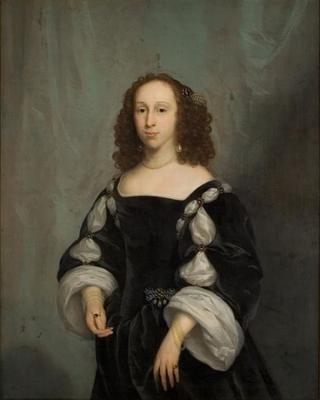 3 The two women's portraits in Dulwich by Cornelis Jonson van Ceulen I (DPG80 and DPG89) are both dated c. 1639, before Cornelis left for the Netherlands, so they ended up in the British catalogue: see Ingamells 2008, p. 110.

10 ‘This portrait (bought some years ago from Messrs. P. and D. Colnaghi) was once signed and dated, but the signature, which was in thin white on the dark ground, was unfortunately washed off by the picture-cleaner.’

14 Letter from Malcolm Rogers to DPG, 16 Jan. 1997 (DPG594 file): ‘Comparable to his [i.e. Cornelius Jonson I’s] Prince William in the NPG […] The form of the signature of course agrees with that habitually used by CJ Senior’.

16 It is known that pendant portraits can date from different years.

18 The blue background was digitally reconstructed, based on information from the colours under the frame: see Knolle 2009.