Jan van Kessel is most probably identical to Johannes van Kessel, or Johan van Kessel, son of the Flemish-born framemaker Thomas Jacobz. and Neeltje Henrix, who was baptised on 22 September 1641 in the Nieuwe Kerk, Amsterdam. (He is not to be confused with another Jan van Kessel I (1626–79), who was from Antwerp, and who was a painter of flowers and fruit.) The artist posted marriage banns in February 1668 and is known to have had five sons, four of whom predeceased him. Meindert Hobbema (1638–1709) was Van Kessel’s son Isaac’s legal guardian and acted as signatory of the inventory of Isaac’s mother’s effects on her death in 1690.

Largely because of the similarity of his works to those of Jacob van Ruisdael (1628/9–82), it is thought that he probably trained with that master. His earliest known work is dated 1661. Many of his 120 surviving pictures and 70 drawings were until recently thought to be by better-known artists. They largely consist of landscapes and topographical works, such as The Spui and Nieuwezijds Voorburgwal Amsterdam in Winter (Amsterdam Museum) and Bleaching Grounds near Haarlem (KMSKB, Brussels). Some of his works imitate his friend Hobbema’s scenes of villages and watermills. Others reflect the influence of Allaert van Everdingen (1621–75), Jan Wijnants (1632–84) and Jan van de Cappelle (1626–79).

DPG210 – A Wood near The Hague, with a View of Huis ten Bosch

TECHNICAL NOTES
Coarsely woven linen canvas. The ground is mid-tone grey. Glue-paste lined; the original tacking margins are absent and the painting has been reinforced with a strip lining. The paint surface has a fine overall cupping and a dark craquelure that is denser around the trees. Some abrasion in the landscape and in the sky around the trees. A large area of damage in the centre of the lower edge has been retouched, with a smaller circular one above. The figures are slightly worn and thin. Previous recorded treatment: 1866, ‘revived’, varnished and frame regilded; 1912, lined, Holder; 1949–53, Dr Hell (via Leeds and RA); 1984, strip-lined, surface cleaned, retouching adjusted, revarnished, National Maritime Museum.

The authorship of this painting was long in dispute. Its earlier provenance is unknown, but when it was inventoried by Britton in 1813 it was given to Jacob van Ruisdael with figures by Van de Velde – Adriaen van de Velde (1636–72). In 1835 John Smith challenged the attribution, arguing that the landscape was by Jan Wijnants (the figures were still by Van de Velde). In 1880 Richter and Sparkes recorded a Ruisdael monogram on the painting, but this was presumably a later addition, and has since been removed. In 1890 Michel reattributed the picture to Ruisdael on the basis of the overall composition and execution of the background, but noted that the trees and plants were similar to Wijnants. Simon in 1927 and Rosenberg in 1928 reached a solution when they independently suggested that the picture was by Jan van Kessel, whose style was a composite of those of Ruisdael and Wijnants, and who did his staffage in the manner of Van de Velde. However, despite the plausibility of that theory, it was not until Alice I. Davies’ 1992 monograph on Van Kessel that the attribution gained universal recognition. Perhaps the most conclusive piece of evidence was Davies’ realization that a drawing by Van Kessel in Brussels (Related works, no. 1) [1] was a preliminary study (or at least used) for the oak in the centre of the Dulwich picture. Davies noted a number of woodland scenes by Van Kessel dated 1661 (Related works, nos 4 and 5) [3], and a series of drawings datable to about 1663 (Related works, nos 2 and 3) [2]. However, because of its similarity to a painting by Van Kessel datable to around the middle of the decade (Related works, no. 6), she placed the Dulwich picture c. 1665.

Landscape painters did not always depict real scenes: often distinctive buildings were located in the middle of an imaginary landscape. That could be the case here, but if the scene is meant to be topographically correct, it must have been taken from a short distance to the east of The Hague, where Huis ten Bosch could be seen on the horizon.17 This small Palladian villa was designed by the architect Pieter Post (1608–60) for Amalia van Solms-Braunfels (1602–75), wife of the Stadholder, Frederik Hendrik, Prince of Orange (1584–1647), and built between 1645 and 1652. The octagonal drum and cupola signal the position of the Oranjezaal, decorated by Flemish and Dutch artists including Jacques Jordaens I (1593–1678) and Gerard van Honthorst (1592–1656) as a memorial to the Prince. Van Kessel included a distant view of the palace in another of his landscapes, datable to about 1664 (Related works, no. 9) [5], and it may also feature in the background of a picture dated 1669 in Cape Town (Related works, no. 7). An unidentified painting by Van Kessel that included the palace was sold in Amsterdam in 1811.18 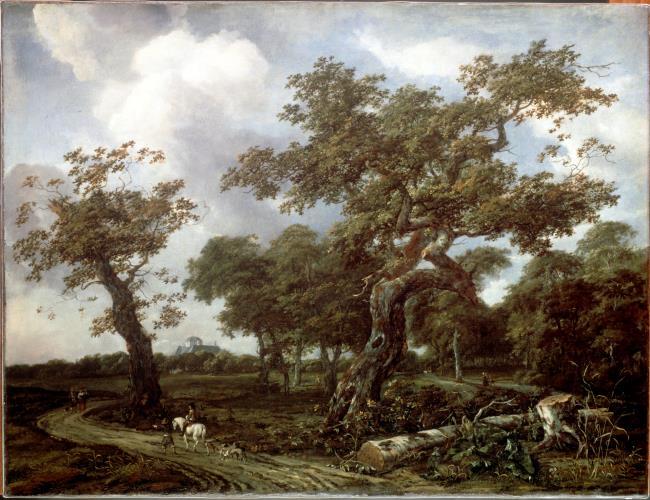 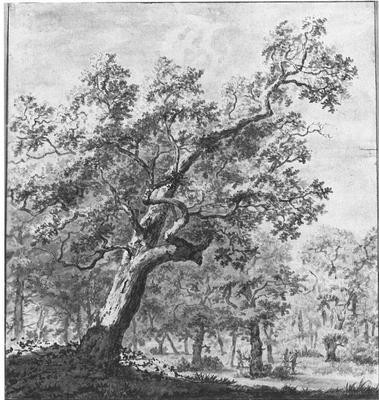 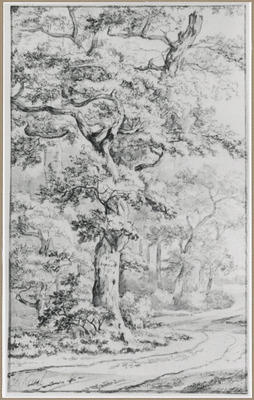 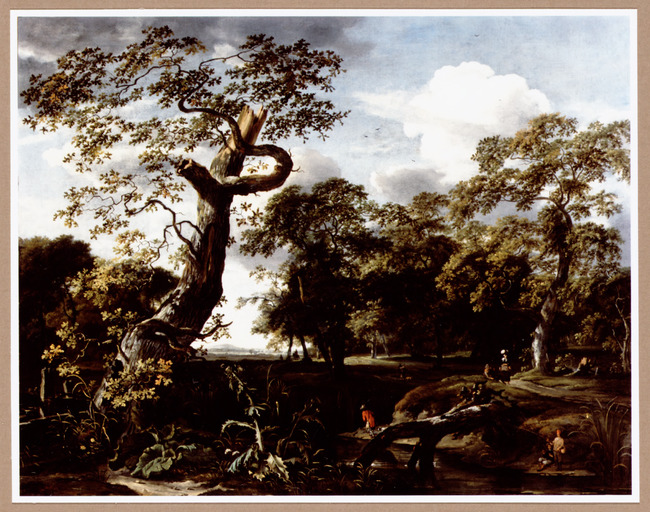 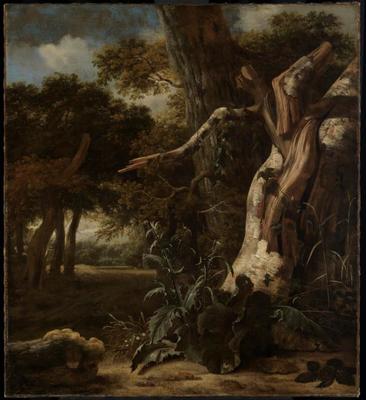 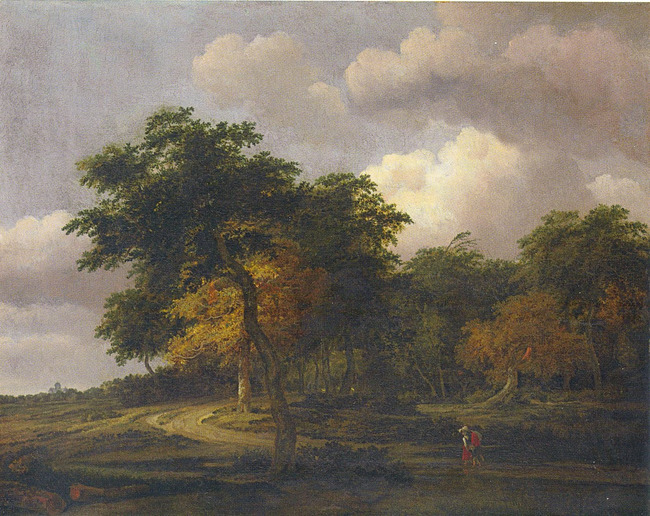 1 ‘Ruysdael. View near the Hague. A truly characteristic and natural representation; the oak is full of character and truth, shewing to perfection the character of “the gnarled oak.”’

2 ‘“A View in the neighbourhood of Haarlem”, Wynants, with figures by Adrian Van der Velde; 350l.’

3 ‘We pass next to a splendid study of trees, near the Hague, by Ruysdael.’

4 Denning says that Smith ‘values it at £350. It is worth much more now. A. Van Der Velde painted figures for both’ (i.e. Wynants and Ruysdael).

5 ‘Previously attributed to Wijnants, but formerly rightly ascribed to J. van Ruisdael, whose signature it bears; it is, however, not to be denied that the influence of Wijnants prevails in some parts, especially in the foreground. The figures are by Adrian van de Velde; the picture therefore must have been painted before the year 1672, the date of that painter’s death.’

6 ‘Of these Dutch pictures, thus portraying little of strong dramatic interest, valuable chiefly for their exquisite execution or perception of quiet natural scenes, there are a few in which the grandeur and majesty of Nature in her more solemn moods are deeply felt. Foremost in this class stands Jacob Ruisdael’s “Edge of a Wood” (No. 278). Prominent both for its size and for its majesty of painting, it impresses the spectator with a sense of the sombre force of nature. Those primeval oaks, gnarled and storm-beaten, seem as stern sentinels at the gates of the forest, into whose dark glades the eye searches, vainly endeavouring to penetrate its gloom. To the Dutchman they must have suggested his strong wooden walls which kept watch and ward over his ports and dykes, or asserted the supremacy of his country’s flag in many a well-fought fight in foreign sea. With all its sternness, Ruisdael has kept clear of the savagery in which Salvator Rosa seemed to find a fierce delight; deep velvety mosses clothe his tree-trunks, and the foliage has all the rich softness peculiar to the climate of Holland.’

17 Smith misidentified the scene as taking place in a wood near Haarlem (see note 2).