Johannes Lingelbach [1] was born in Germany, but as a youth he moved with his family to Amsterdam around 1635 and it is there that he is presumed to have trained as an artist. According to the 18th-century biographer Houbraken he travelled to France in 1642 and two years later was in Rome, but he is only mentioned in documents there in 1647, 1648 and 1649. He was strongly influenced by the work of the older Pieter van Laer (1599–1642) and his followers, the Bamboccianti. In 1650 he left Rome and by 1651 he had returned to Amsterdam. His earliest known work is dated 1650, but he seems to have been painting from 1637. It has been suggested that several small-scale scenes of trade may have been painted by him during his Roman sojourn. Subsequent works largely comprise Italian scenes, usually of markets, piazzas and seaports, populated by all manner of exotic individuals. He often painted figures in the landscapes by others including Meindert Hobbema (1638–1709) and Jan Wijnants (1632–84). 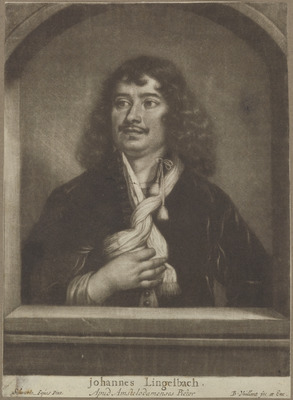 TECHNICAL
Fine plain-weave canvas. Grey ground. Glue-paste lined; the original tacking margins are absent. The lining has been reinforced with a strip lining. The original canvas is approximately 0.6 cm short of the stretcher on all sides and the visible edges of the lining canvas are not in-painted. The paint surface is slightly cupped. There are scattered small areas of damages (now retouched). Previous recorded treatment: 1953, Dr Hell.

DPG326 is an example of a fashion in Dutch art in the mid-17th century for paintings of imaginary and exotic Mediterranean harbour scenes. The chief artists working in this genre were Johannes Lingelbach and Jan Weenix (1641/2–1719). Typically their pictures combine coastal views with antique ruins populated by a panoply of colourful figures, as here.18

It was suggested that this scene could be an allegory of Navigation, as several elements point to shipping: the statue of Neptune, the prow of the ship with the armillary sphere, the lighthouse, and the maritime attributes in the corner below right (globe, grade stick).19 These are however only allegorical elements and not enough to characterize the picture as such an allegory.20 Moreover there are also allusions to Trade, which in the Netherlands is very near to Navigation.

According to Denning, Desenfans purchased the painting from Moses Vanhausen in 1783, but this is unconfirmed. Its first certain appearance is in the 1813 inventory of Sir Francis Bourgeois’ collection. Many paintings by Lingelbach of harbour scenes are mentioned in 18th- and 19th-century sale records, but none can be certainly linked to DPG326.21 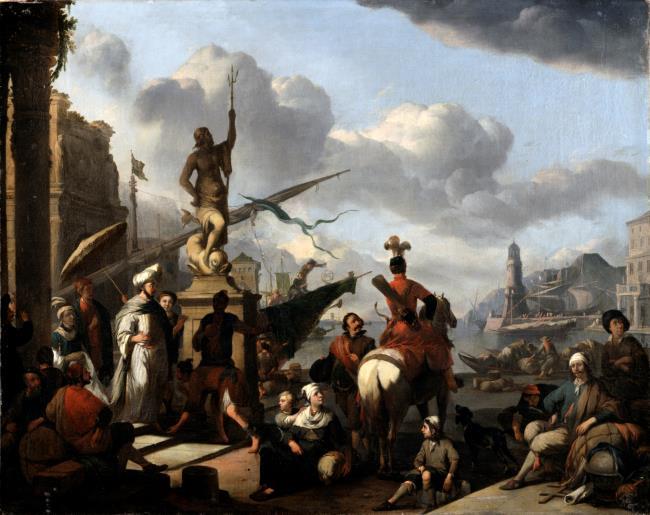 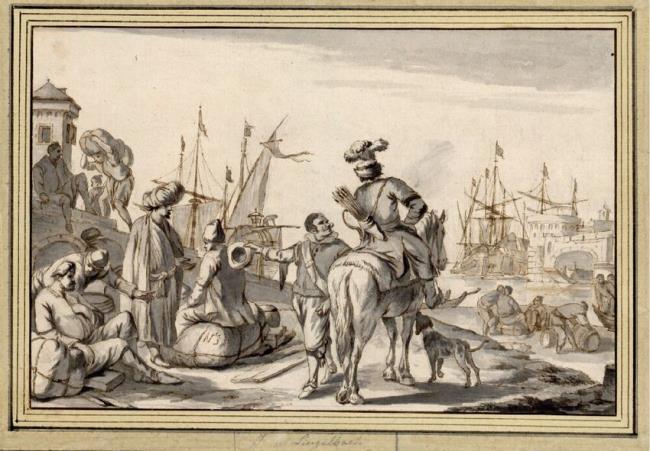 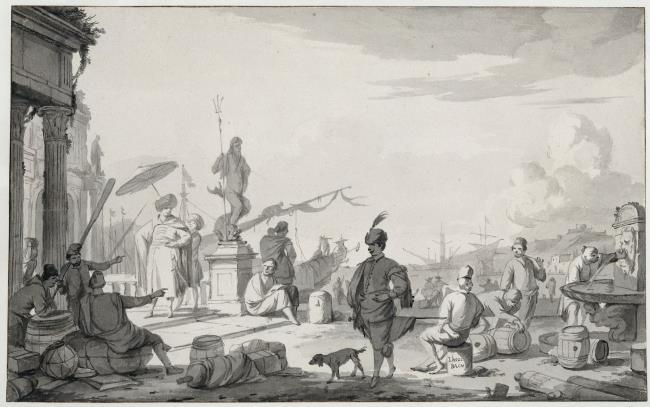 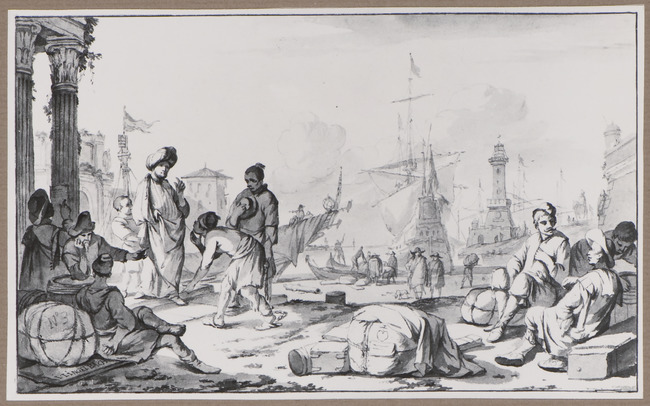 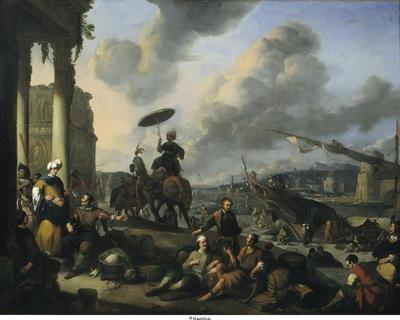 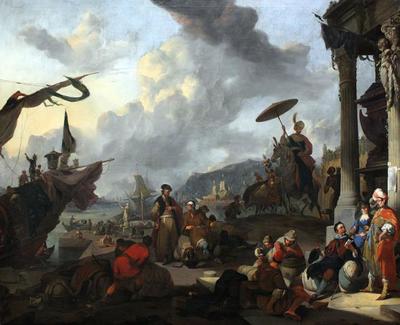 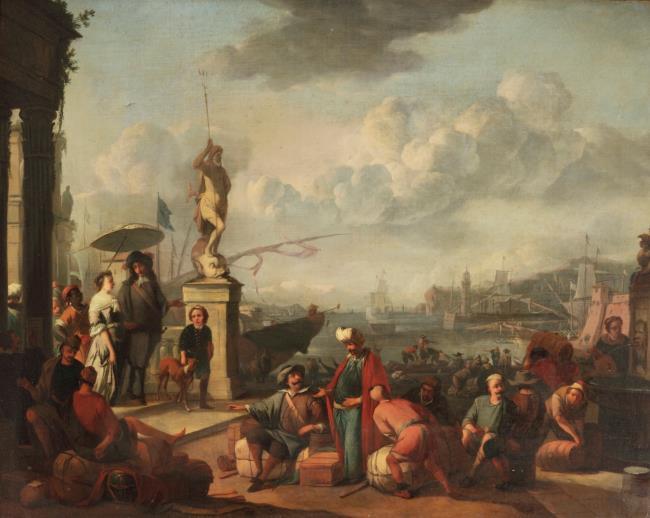 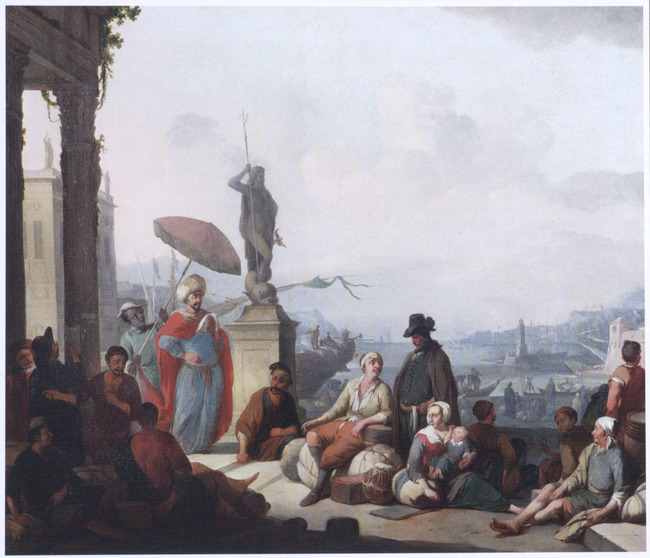 TECHNICAL NOTES
Plain-weave linen canvas. Glue-paste lined; the original tacking margins are present. The painting has suffered from blistering in the past. The paint is worn and abraded and there are several scratches in the lower edge. The central poplars are overpainted. The paint is obscured by a heavy discoloured varnish, which has been partially removed from the sky. Previous recorded treatment: 1953–55, Dr Hell; 1990, lower edge secured with wax/resin, surface cleaned, N. Ryder.

In the foreground is a blacksmith’s shop with the papal coat-of-arms on the corner above the overhang; two men are shoeing a pack-mule. In the background is a view of the church of the Trinità de’ Monti.

Thomas Kren suggested that the picture dated from the 1640s, when Lingelbach was in Rome.26 But while after his return to Amsterdam Lingelbach eventually gave up painting small Italian scenes in favour of fanciful and exotic port scenes (see DPG326), he continued to make use of the architecture he had seen in Rome: the Trinità de’ Monti, for example, appears in a port scene painted in 1665 but on the left side of the picture (see under DPG326, Related works, no. 2b). It also appears in a scene of handing out food to the poor, which includes a colossal Roman statue (Related works, no. 2) [9].

It is not certain, however, that DPG55 is by Lingelbach.27 An identical painting said to have traces of a signature was on the Paris art market in 1980 (Related works, no. 1); it is not clear which is the original, if either of them is. DPG55 is listed as a Lingelbach in Britton’s 1813 inventory of Bourgeois’ collection; Cockburn attributed it to Pieter Cornelisz. van Slingelandt (1640–91) in 1817, in the earliest Dulwich catalogue, a suggestion rejected by Denning in 1858 and 1859. Sparkes in 1876 attributed the picture to Lingelbach again, and he was followed by all subsequent authors. 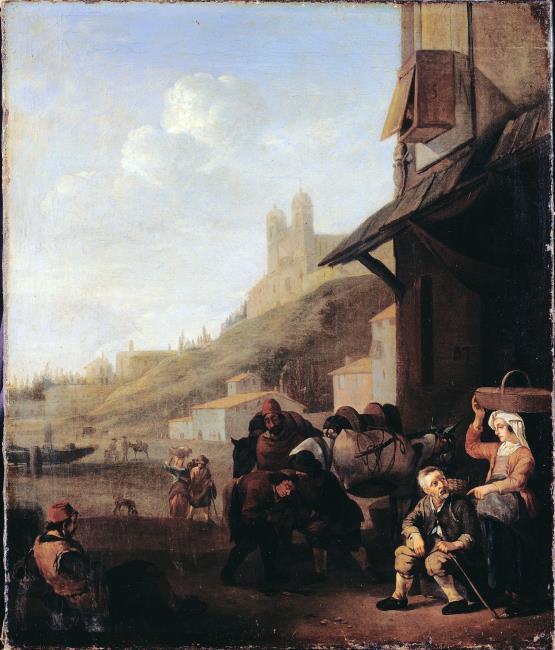 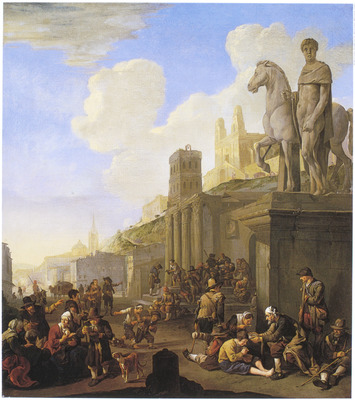 3 3 ‘A Moorish Market. A Port in the Levant […] The painter excelled in this style; and this is a very fair specimen of his talent.’

5 ‘Smith accuses him [Lingelbach] of imitating Karel du Jardin. Had he remembered little things called dates, he would have seen how much more probable it is that Karel du Jardin imitated him.’ NB: Du Jardin was indeed four years younger than Lingelbach.

6 ‘The scenery recalls the port of Genoa. The man sitting in the right corner of the picture probably represents the portrait of a traveller.’

19 The suggestion was made in conversation by Ineke Goudswaard, July 2017.

22 ‘Van Slingeland. View of a Convent, Buildings and Figures.’

23 ‘A Dutch picture, attributed in the catalogue to Slingsland, by which I suppose Slingelandt is meant; but it is not his.’

27 J. Nieuwstraten in a note on the RKD photograph wrote trant van Lingelbach (manner of Lingelbach), and it is not included in Burger-Wegener’s œuvre catalogue of Lingelbach (1976).