Carl Wilhelm de Hamilton (also Karl Wilhelm or Charles William), whose nickname was ‘Thistle Hamilton’, specialized in still lifes with game, living animals and plants. He was the son of the Scottish still life painter James Hamilton (c. 1640–c. 1720). His brothers Philipp Ferdinand (c. 1664–1750) and Johan Georg de Hamilton (1672–1737) were also painters. Carl Wilhelm was first active in Brussels, where his father worked. He was probably painter at the court of Baden-Baden from 1699 to 1701,1 and later, until his death, chief painter to Alexander Sigismund von der Pfalz-Neuburg (1663–1737), bishop of Augsburg from 1690. It is possible that he was introduced to Germany by Franz de Hamilton (before 1640–in or after 1702), perhaps an uncle.

TECHNICAL NOTES
The painting is in good condition [contrary to Denning's impression], and the cracks in the paint surface are secure. The lined plain weave canvas is stretched on the old stretcher, which has diagonal corner bars and probably dates from the late 18th century. The paint layers are very thinly applied with some very fine detail over the thick grey priming layer. Discolouration in the blue pigment in the sky seems characteristic of smalt. Previous recorded treatment: 1911, relined, Holder; 2015, cleaned, relined and restored, N. Ryder. 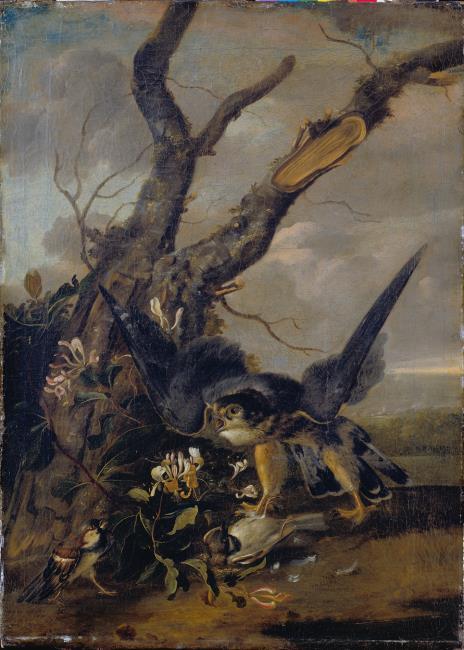 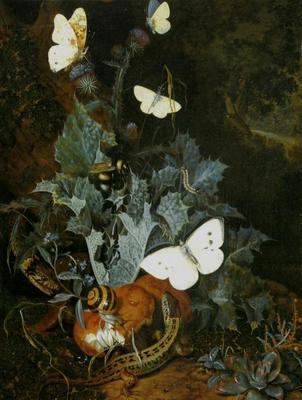 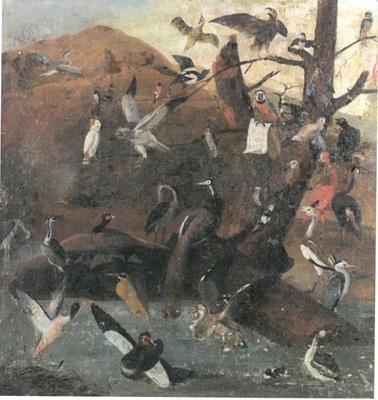 The attribution to Carl Wilhelm de Hamilton is based on stylistic grounds. A picture by him with a snake, a lizard and a snail in Lyon shows the same hand in trees, foliage and ground (Related works, no. 1a) [1], as does Hamilton’s Lizard with a Snake, sold in 1983 (Related works, no. 1b). The commotion that the hawk creates here is shown in an extreme form in The Parliament of Birds, sold in 2011 (Related works, no. 1c) [2]. The body of the dead fox among the birds is a disturbing element in a painting in Karlsruhe (Related works, no. 1d) [3], as disturbing as the action here, where a hawk is on the verge of killing one of the sparrows. 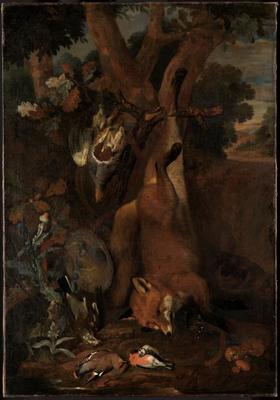 3 ‘A very spirited, though not an agreeable picture, in the style in which Weeninx excelled.’

4 1858: ‘A Hawk and Sparrows. John Weeninx. This picture was formerly ascribed to Weeninx, without any distinction between the father & the son. The minute finish of this however proves it to be by the son, as the broader touch of (147) [= Weenix DPG47] proves it to be by the father. […] In a bad condition but very true to nature, and painted with a very fine touch. I should say a genuine picture. It has been rubbed & scrubbed past redemption.’ 1859: ‘He painted many subjects, but his forte was undoubtedly, in depicting animals – dead and alive. His birds are quite wonderful – so like nature – so delicate – so exquisitely coloured. […] This is a genuine picture – true to nature, and painted with a remarkably fine touch. But it is in bad condition, having been terribly rubbed and scrubbed in former times.’